Because the BBC tends not to report these things. 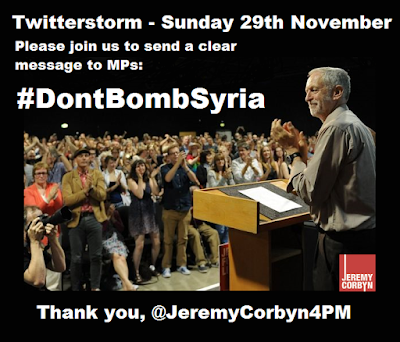 Terry and the government

Towards the end of the 1980s, I was part of a fellowship run by the free-church (Methodist) chaplain in a men’s prison.

Every Tuesday we went to share with them in prayer, worship and discussion. It was a luminous and wonderful opportunity, where I made many friends and gained deeper insights than I’d otherwise have had the chance to do.

Today, reading the latest news of our British Prime Minister’s avid inclination to drop bombs on Syria, and the struggle of saner people to stop him, a memory came back to me from those Tuesday evenings at the prison fellowship.

In prison, a grim humour flourishes that arises from familiarity with defeat and despair. ‘Tell us a joke, Pen,’ an inmate would say, coming to sit beside me as the men filed in.

One of the men I knew there, the graduate of a seamless continuum of abusive authoritarian institutions since he was two years old, had a ready store of jokes and funny stories, mostly very politically incorrect, all very funny.

At his most recent arrest, for which he had been sent down on that present stretch, the magistrate had demanded to know, before sentencing him, if he had anything to say for himself. Perhaps unwisely, he had reached into his breast pocket for his packet of cigarettes, flipped open the lid, and muttered into it: ‘Beam me up, Scotty.’

A Star Trek fan, his imagination had been caught by a short dialogue between Captain Kirk and some other staff member of the Starship Enterprise. The two had teleported onto an alien planet, where some of the natives began to approach.
The dialogue went  like this:

And this amused Terry immensely. He recognized in it the pattern of established hypocrisy embedded in authoritarian institutions everywhere. When he first arrived at the prison, he had come to scope out the chaplaincy meeting, ready to mock and cause trouble. But, finding us to be a cheerful and welcoming bunch with a first-class jazz pianist, free-flowing strong tea and plenty of biscuits, he softened towards us. In time, he’d be one of the first in the queue, showered, his hair combed to perfection, wearing a clean shirt, eager to see us.

And often, as he slid into a seat alongside one of us, he’d murmur in greeting: ‘This is life Jim, but not as we know it. We come in peace – shoot to kill.’

So they did. Good point, Terry. Still at it.

NO to bombing in Syria

I am absolutely, completely, unshakeably opposed to the proposed UK airstrikes in Syria.

The last time (two years ago) our Prime Minister urged that we do this, the result would have been disastrous. If he’d had his way, Bashar Al Assad would have fallen and Daesh – the very people he wants us to bomb now – would be running the country, in control of the entire armed forces of Syria.

Bombing Syria would escalate violence, incite war, and inflame terrorism. Besides this, it would certainly cause death, suffering, injury and hardship to men women and children who are not members of Daesh, and whose lives are already made miserable by the cruelties of armed extremists.

NO
TO BOMBING IN SYRIA

Important to us all in these days

Since the Paris attacks, political leaders have been heatedly discussing the matter of air strikes in Syria. David Cameron (wouldn’t you know it) is all for this. Obama is more cautious. François Hollande typically hot-blooded in his response.

But in considering war, it’s important to have a clear understanding of the kind of thing we’re talking about. I invite you to read this article about drone warfare – note the vocabulary. When the drone operator kills someone for the first time, they call it “popping his cherry”, a sexual reference – losing his virginity. And the children are called “fun-sized terrorists”. Hmm.

And then the economics of war should not be overlooked. War is central to the prosperity of the United Kingdom and the United States of America. War is in our interest. To my mind, this places extra responsibility on UK and US citizens to work tirelessly, vociferously, persistently and uncompromisingly for peace. Especially as all things are connected, and climate change links in to both consumerism and war.

This is important to me. Not because I am an especially kind or compassionate individual – I’m not sure that I am; more pragmatic, really. It’s just my selfishness. On Judgment Day, what I’d dearly like to hear Jesus say is, “Well done, thou good and faithful servant”; not, “Away from me, ye cursed. I never knew you.”

And I think the part I take in caring for the Earth, in welcoming refugees, and in working for peace, feeds in to that strongly.

Only very rarely do I bring something to your attention that needs donations of money, but I’m doing so today. 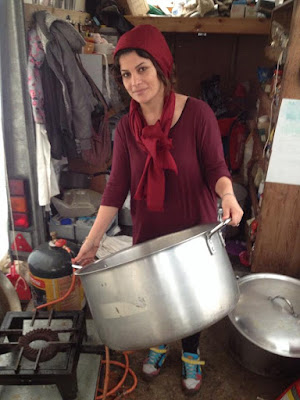 The One Spirit Ashram Kitchen is feeding hundreds of people every day in the Jungle at Calais. The Jungle, if you aren’t familiar with the name, is the place where, in nylon tents and makeshift shelters, thousands of refugees are stranded, having made it across the sea to Calais (France) in the hope of starting a new life in Europe.

From here in the UK, people are constantly organizing trips with clothes and blankets, tents and sleeping bags – the necessities of life. I presume the same is true across Europe.

The One Spirit Ashram Kitchen is run by volunteers, and provides a basic hot meal each day to the hundreds standing in line, until the food runs out.

But the cold and wet winter weather is setting in, and every day more people are coming in from the sea, the numbers swelling.

Please, please – if you can possibly help by sending some money for food and to build a bigger kitchen, will you consider doing so? Will you ask your church to help? Just do what you can.

Read about them here. Donation link embedded in the article or here. 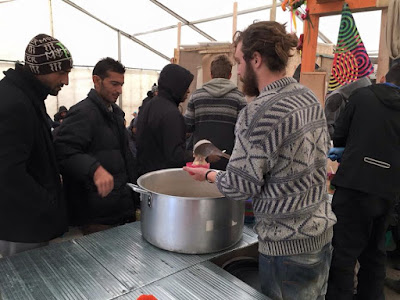 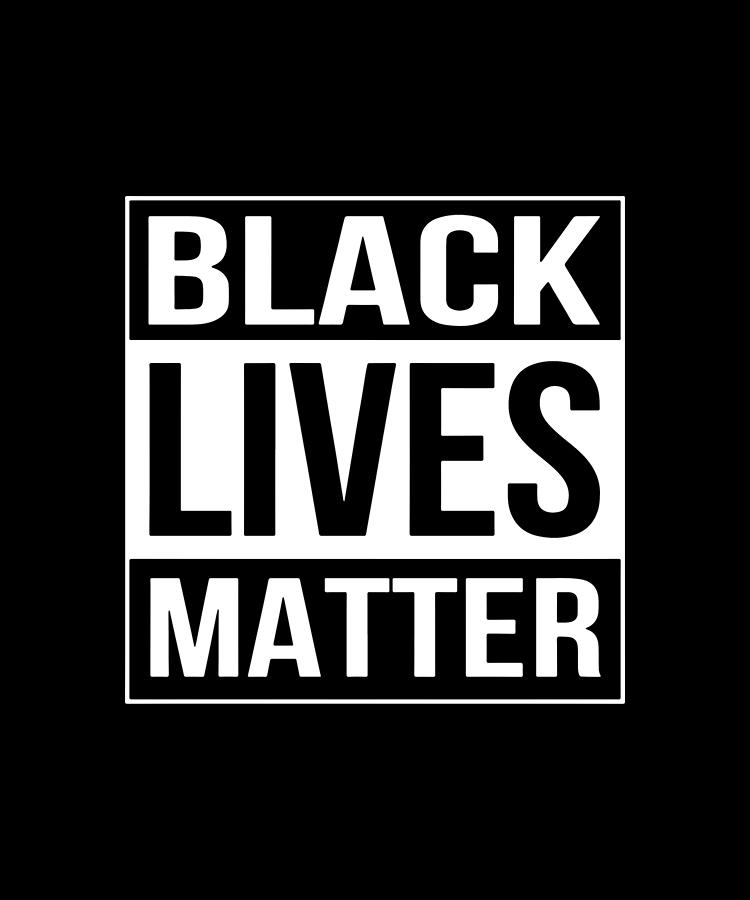