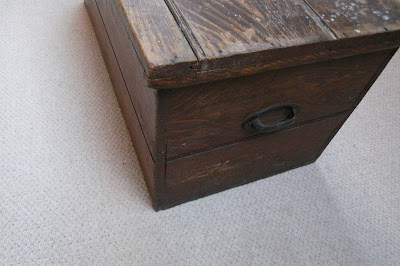 This was a handy wooden box a bit shabby inside but good for storing shed things in etc.  As with so many things one owns, it was so useful.
I am finding it helpful to disregard if things are a) useful b) beautiful c) I like them.  Those are not the criteria I apply any more.  I try to consider if it is necessary for the journey I am making rather than if it is attractive or has intrinsic virtue – because if it didn’t I’d not have got it in the first place and therefore would be inclined always to keep everything forever.
Posted by Pen Wilcock at 00:14

Your post brings to mind the pastor at our church just before Jack and I moved to Arkansas USA. Wonderful sermons and a delight to talk to but then when I saw how he talked about the President, horrible, insulting remarks, I was deeply distressed! Not that I agree with our President or anything but I will not speak in such awful ways but I will pray for him. And then I am reminded of Thomas Kincaide the artist who just passed. Supposedly a Christian man but his business ethics and behavior in public told differently. Wrods are worth little if not followed by actions and how we live our lives.

Hey honey - good to hear from you x

Many years ago I called a customer, I was put on hold and got to listen to several minutes of Christian radio, then the store owner came back on the phone, he needed help with a printer. I gave the man directions, he yelled them to his wife who was at the printer. Apparently his wife didn't do things exactly as he wanted and he was quite rude and belittling to her (bordering on abusive), I came away with the impression that the Christian hold music was simply for effect :)

I guess such folk are good teachers - they certainly pull me up short and make me ask myself how I've been behaving!!

I remember ironing. I used to do it for effect. :-)

I found ironing a serious drawback in Plain Dress, which opens up a whole new laundry career!

Ladies,Ladies, call me crazy, but I really enjoy ironing! I find it soothing to my soul, and to the wrinkles in my clothes. I always feel very relaxed after ironing, I think it is the back and forth motion, because I also enjoy mopping my basement! I don't enjoy mopping small areas, but give me a large area and I will be the most relaxed person when finished.

Living life for 'the effect', for the reaction it conveys, for the outer layer it keeps...this is what life is when we focus on the external, and sadly, this is how everyone perceives everyone is.

Amazing how you said, 'not now I’ve looked underneath and seen how the engine works', this is what happens when we don't live our Truth! We end up with the outside being a beautiful shell of what we truly are.

As always, I leave with thoughts i my head...thank you Pen.

Hello Maria :0) It's funny, writing this post has made me realise how much more I do for effect than I thought I did! Very helpful and instructive. x

Oh yes, I know more than one significant public ordained Christian whose private behaviour was appalling.

I guess that's going to be true anywhere - people struggle and fail, have hangups and get lost on the journey. I think what bothers me most is that the church seems to have reached the stage (like, about 600 years ago) where that's got institutionalised in. So that it feels now like it needs the spiritual equivalent of a colonic washout and a coffee enema, and start again.

Oh!!!!LOL!!!! a coffee enema! You and one othe friend are the only other people that I know that will actually even say those words out loud! Sometimes I bring it up "just for effect". Never fails,either.

Great post. I used to work as an administrator in church so I got to peek "behind the veil" quite a lot and it isn't always all it's cracked up to be. I used to deal with it by telling myself that although it is one of the oldest sayings in the book, Jesus really does see the heart and he knows when I am doing my best.
PS My hubby often suggests shirts are better fastened to the top. Feel free to suggest away I say!

Hi Ember - I seem to be on a completely different track with this post of yours, but your comments below are what stuck out to me:

"It’s interesting being married to someone from a different planet. On more than one occasion, when I have been prattling on easily, clambering around in my thought systems and commenting on the view, the Badger has remarked that though he understands the prose sense of all the words I have been using and is familiar with the vocabulary and listening carefully, he has been completely unable to extract any meaning out of what I have just said to him."

You see, I am trying to read your book again (The Road of Blessing) and I seem to be having the same problem as the Badger.

I know it is a very good book....and I understand all the words you are using....but I just can't seem to get my head around them all and extract the meaning and understanding from them.

Thanks Pen. I agree with what Maria said about leaving with thoughts in my head. You have challenged me today to think hard about the way I live vs the 'profile' I'm 'supposed' to be building.
I also found the following words resonated deep within me: "I will keep going . . . I will keep going . . . Jesus deserves that much from me . . . He is my Lord."
Thanks again.

Hiya Penny - I too found the whole "building a profile" lark such a thorny issue. So much so that I stopped. I just blog here, and that's all.

Lynda - I'm so sorry The Road of Blessing is proving completely impenetrable to you! Thanks for trying! I was a bit the same with Ann Voskamp. I think I got up to page 3. Horses for courses I guess. Bin it with my blessing! :0D

Oh no, I couldn't bin it...I want to read it, but the same thing happened last year when I tried to read it, that was why I put it aside.

But I DO want to read it, I'm sure I will benefit from it, but I think I just need to get my head a bit emptier of my own thoughts so I can take in all you are saying in the book.

I guess it's a bit different from the Hawk and Dove books (which, by the way, I loved...as well as Clear Light of Day). I found them very soothing to read. Guess I just need to concentrate a bit more with this one.

Better stop here, or you will be 'doing a Badger' and telling me you can't extract any meaning from what I'm saying :o) xx

I have been mulling over my previous comment and Ember's reply.

I think I suggested a clear disconnect between the private and public behaviours.

But many of the public behaviours were equally appalling.

What astonished me was the degree to which all around these people made excuses for and/or ignored behaviour which would be totally unacceptable, in some cases criminal, in any other context.

Anyone who tried to question things was massively scapegoated and derided and their own integrity and sanity questioned publicly and privately.

So I agree with you Ember, you put it extremely well, it is institutionalised.

I think this is why so many people stay a good distance from the institutional church. Their instincts are for safety and sanity.

What you describe, I have also seen, Daisyanon.