Rachel and her sparrows

I’m wondering if you have come across the work of Rachel Phifer?

I’m kind of hoping not, because then you will have heard about it first from me and be incredibly grateful to me for alerting you to it – kudos, kudos!!

She’s just had her first novel published in July – called The Language of Sparrows.  Already she has more reviews on Amazon than you can shake a stick at, all basically saying you have to read this book.  I suspect that if you take a few minutes to read the ‘Look Inside’ pages on Amazon, you will agree with them.  One of those writers who know how to do that thing they always used to say about crossing the road: STOP LOOK LISTEN.

This is Rachel in her garden: 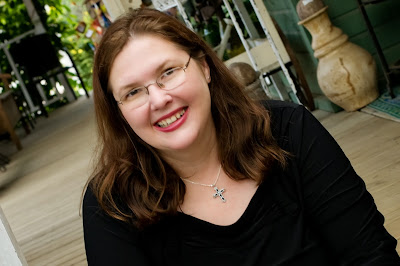 She’s written a thing specially for us, about the prayer of St Francis, and I just loved it.

This is what she wrote:

There were times that “Help!” was the only prayer I could come up with. Sometimes for months at a time. It’s not such a bad prayer, really. It’s honest. It’s direct. But that little word didn’t begin to address the depth of need I felt.

About twenty years ago, in the midst of unemployment, broken friendships and a long period of blue days, I stumbled across a book with The Prayer of St. Francis written in the back. Lord, make me an instrument of your peace, it began, where there is hatred, let me sow love.

I didn’t have to read very far into the prayer to know it had the words I’d been searching for. So in the mornings, I would make my way out of bed half an hour earlier, and curl up in my hand-me-down gold chair. I’d say the prayer slowly, trying to concentrate on each word. I’d say it twice more, and in the end, I’d whisper the words at the end of each line: peace, love, pardon, faith, hope, light, joy, console, understand, love, pardoning, giving, eternal life.

It was a bit odd for me. I was raised in a Baptist family and I’d never heard anyone reciting a prayer. There was even a niggling worry that repeating a prayer was the “babbling of many useless words” from Matthew 6.

But it wasn’t just a recitation, and it certainly wasn’t useless.  It was a prayer spoken to God, with words I hadn’t known I wanted to say. And to tell you the truth, my old chair seemed like a temple for a while.

It was such a relief to come to God with words I hadn’t known I wanted to say, asking to be something nobler and deeper than I would ever have known I wanted to be. I’m not saying that I became a walking prayer of St. Francis. The truth is, I still had blue days. I was still a sinner. But I began to sense God inhabiting my days.

I’d like to say that I’ve kept the practice of praying the prayer over a lifetime. But I can’t. I’m not that disciplined. Still, when I can’t find the words I need, it’s an anchor to come back to.

I’m a working mom and a writer. So there have been quite a few times, when I’ve been too exhausted even to pray those two stanzas of the St. Francis prayer. But the practice itself of saying words that aren’t my own still sustains me.

One minister thrown into a communist prison and tortured said he forgot every prayer he’d ever learned, but he remembered to pray, “Jesus!” I’m not that hard pressed. No matter how exhausted I am, I can always recite something like, “In You I live and move and have my being” (Acts 17) or “This is the day You have made. I will rejoice and be glad in it.” (Psalm 118)

There are always words to fill the dark spaces with light and the empty spaces with God’s presence.

Thank you, Rachel, so much.

Yes, Rachel, I am a Baptist, too. But I think that there is a difference between "vain utterances" and meditating on truth. I have been at that place where all I can pray it "Jesus". It is good to know that the Holy Spirit puts words to our groaning. As always, you put it so well!

And I am big fan of yours, Ms Wilcock, you have such a way of story telling my life! I began to read your books after my husband's stroke 2 1/2 years ago, and have been blessed by your insight repeatedly.

Thanks, Pen, for inviting me on and for that lovely introduction!

Hi Deanna - thank you for making yourself known! Stroke is a BIG thing to deal with. May you and your husband, every day, be strengthened and blessed. xx

Rachel - lovely to have you here. Waving from England. xx

Read all the bits I could read for free on Amazon...now I want the rest of it!

The Kindle version is much less money than the paperback, Debs - and you don't have to have a Kindle reader, you can register your PC/Mac to download Kindle books.

Unfortumately I don't even have that much, Pen! LOL I'm holding on to the hope that even though I have technically had my Christmas present already that I might still get The Hawk and the Dove 7 (whatever you have called it! lol) from Mum and Dad in December.

One day I shall be able to get it...hopefully :-D

I now have HUGE happinesses in my heart :-D

Good. Mind you, I'm still waiting to hear when it will be out, in what format and how I can get hold of it! My trusty folk are not being especially forthcoming!

Deborah, I'm glad you enjoyed the sample. If you're interested and don't mind reading an e-version, email me at rachelphifer.com@gmail.com. My publisher has allowed me to share the book with a few readers in exchange for an honest review.

It's your day, Debs!

This was so beautiful. just had to tell you before I head over to Amazon to check it out. I'll be printing the prayer out and popping it in my Bible. Really needed to read this today. Thanks Pen and Rachel.
Blessings Gail

Oh Rachel Thank you soooo much :-D An email has been sent to you :-D

I have so much happinesses now my head might explode :-D

Just wanted to say I have finished reading Rachel's book and it is TOTALLY AWESOME. I feel like I have been on a roller coaster of emotion from laughing to crying and also squealing :-D Everybody should read it straight away :-D

Wow! That was quick! A book you can't put down! Thanks Debs, and thanks Rachel! xx

Totally! I was the same when Remember Me arrived from Amazon, Pen. I sat on the sofa and read til it was finished :-D

Well. I have just read all the pages available of the book. It is very compelling. In a hurry I became concerned for the girl, and the man, and the mom, and now also the teacher. These people are very real.

Not only that, but it is written in a style that should be accessible to teens. I have not read the entire book, of course, so I cannot say for sure, but I wonder whether this could be an important novel for the young adult market.

Congratulations to the author, and thank you, Pen, for bringing it to our attention!

Deb, I'm so glad you enjoyed the book, and thank you for the review on Amazon UK.

Gail, blessings on praying the St. Francis prayer. May it bring you peace and draw you close to God.

Paula, I think of the novel as more adult reading than YA. However, I think it could be definitely be read and appreciated by teens who aren't very sensitive. I actually had the novel, The Chosen by Chaim Potok, in mind when I started writing, which is sort of a hybrid as well, and which touched me deeply as a teen.

It's a very good book, Rachel :-D I mentioned it on another website I visit too :-D Thank you again for letting me read it :-D