As those who read regularly here will be quite clear by now, I am not a sociable person.  I am logged in to society as Two Hours Max.  But that doesn’t mean I don’t like people.  And, oddly, it’s partly because I don’t attach emotionally that sometimes others (especially when they are in some kind of fix) find my company restful.   I observe and I can empathize, and in some (but by no means all) circumstances I can establish a rapport.  But whoever you are, I will not cling to you; my default mode could be described as “wandering off”.

An important aspect of tiny-house off-grid living that appeals to me is the non-attachment.  Regular houses are attached to the city by systems of pipes and wires, eerily reminiscent of a hospital patient in an acute condition.  The notion of pulling the plug attracts me strongly.  Just as I am sure without hesitation that I would prefer to be let go than held to bodily existence by tubes and wires, so I like the idea of living in a house that has let go, been released: a house that has – even in this urban setting – gone back to the wild.

As a child I had a story book from the library about a beach house built in a town on a city street.  A whimsical fable resting on the small legs that is a feature of some such houses to allow ventilation under the floor, the tale is told of how one night the little house decided to leave the city and, on its little legs, walked away to the side of the ocean where it belonged.  Even as a child of four or six or whatever I was then, my soul responded with a definite “Yes.  Me too.”

Even so, I travel with a tribe – I am part of a household and a family beyond that, and I am married.  Our solution works well – I spend time in Komorebi and time with my household; for we are good friends.  Why waste the wood and create the pollution of two firesides?  Mostly we share one.  And, as my good Badger put it so succinctly and unequivocally, “No; I do not want to live in a hut in the garden.”  All connection and relationship is worked out through compromise, and this is ours.  Komorebi is the little dinghy bobbing along behind the big boat.

But though the Badger may definitely and surely know he does not want to live in a hut in the garden, he likes to visit with me there; and so, I think, will my grandchildren once the weather warms up and the garden offers the play space necessary for small people to ping around (at the moment it’s too cold out and too small in for our lengthy Sunday visits).

And I think it is more than likely that, as time unfolds, the Lord Jesus will want to bring his friends along to Komorebi for a chat too, because there is something about a tiny wooden off-grid house surrounded by trees that is inherently healing.

Occasionally, too (though not often) people want to come and talk with me about my ideas and my books and the way of life I have chosen.  Though the response to those things from those few who bother to enquire could be summarized as “Whatever”, here and there are the few who stop and say “What?” and want to know more.  For example, some folk from the Jesus Army are coming to see me in early February, and I think there is every chance they will enjoy sitting round the little stove in Komorebi.

So part of the design discipline has been ensuring that up to six people could comfortably sit and chat for an extended period of time.

What I am not into is “entertaining”.  I have no plans to devise cunning methods of producing a three-course Cordon Bleu meal for six people at Komorebi. 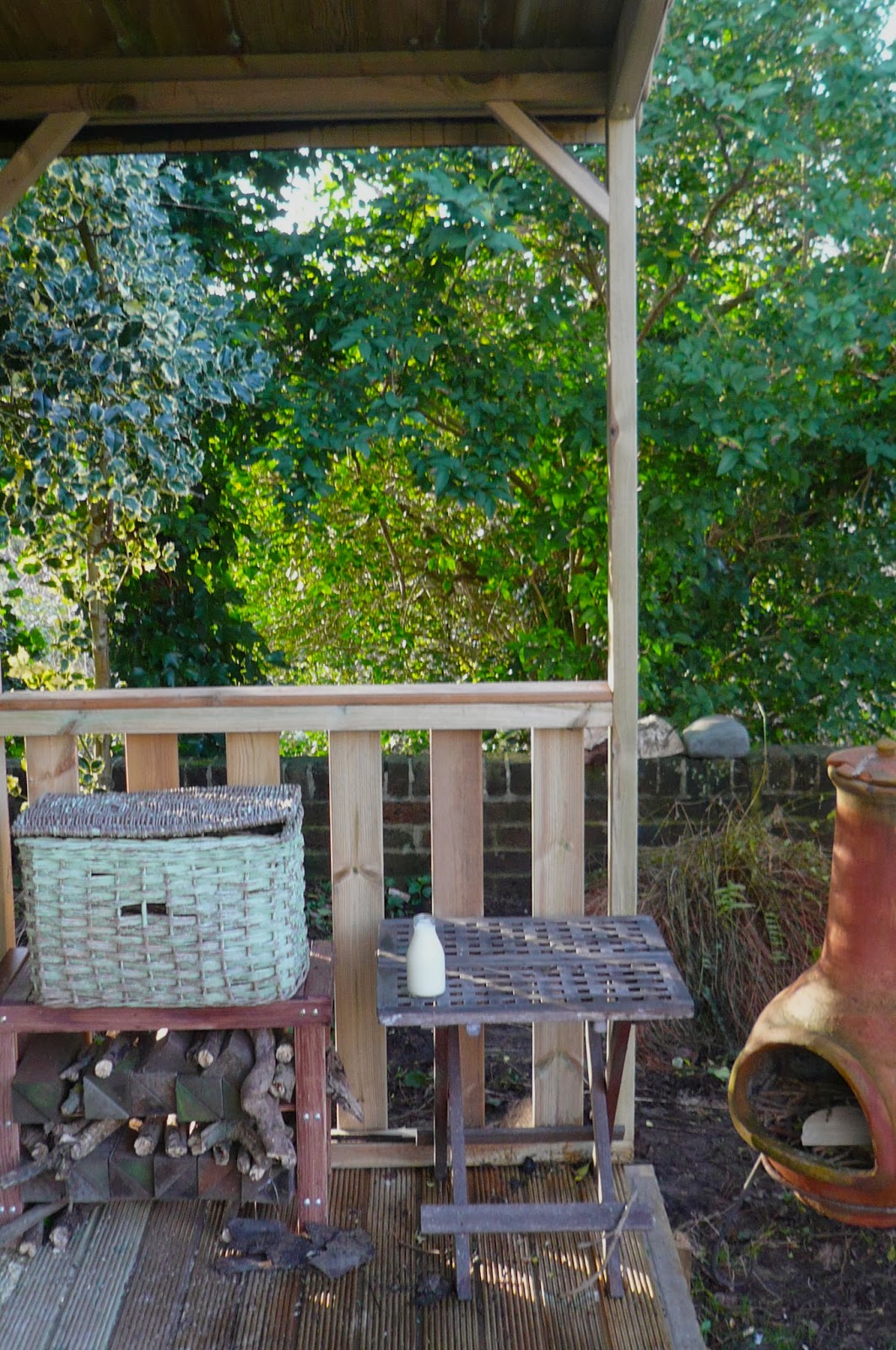 In the summer, we can sit out on the verandah, cooking sausages and toasting marshmallows in the chimenea.  Not in the winter.  I have enough food preparation space for my own wants, but not for a group of guests, and in a 10’ x 8’ living space, frying sausage and onions once means all my clothes smelling of fried sausage and onions forever.  But Marks and Spencer sell a very tasty range of sandwiches already prepared; so I will get some of those when I have guests, and the cardboard packs they come in will do very nicely for kindling the next day. 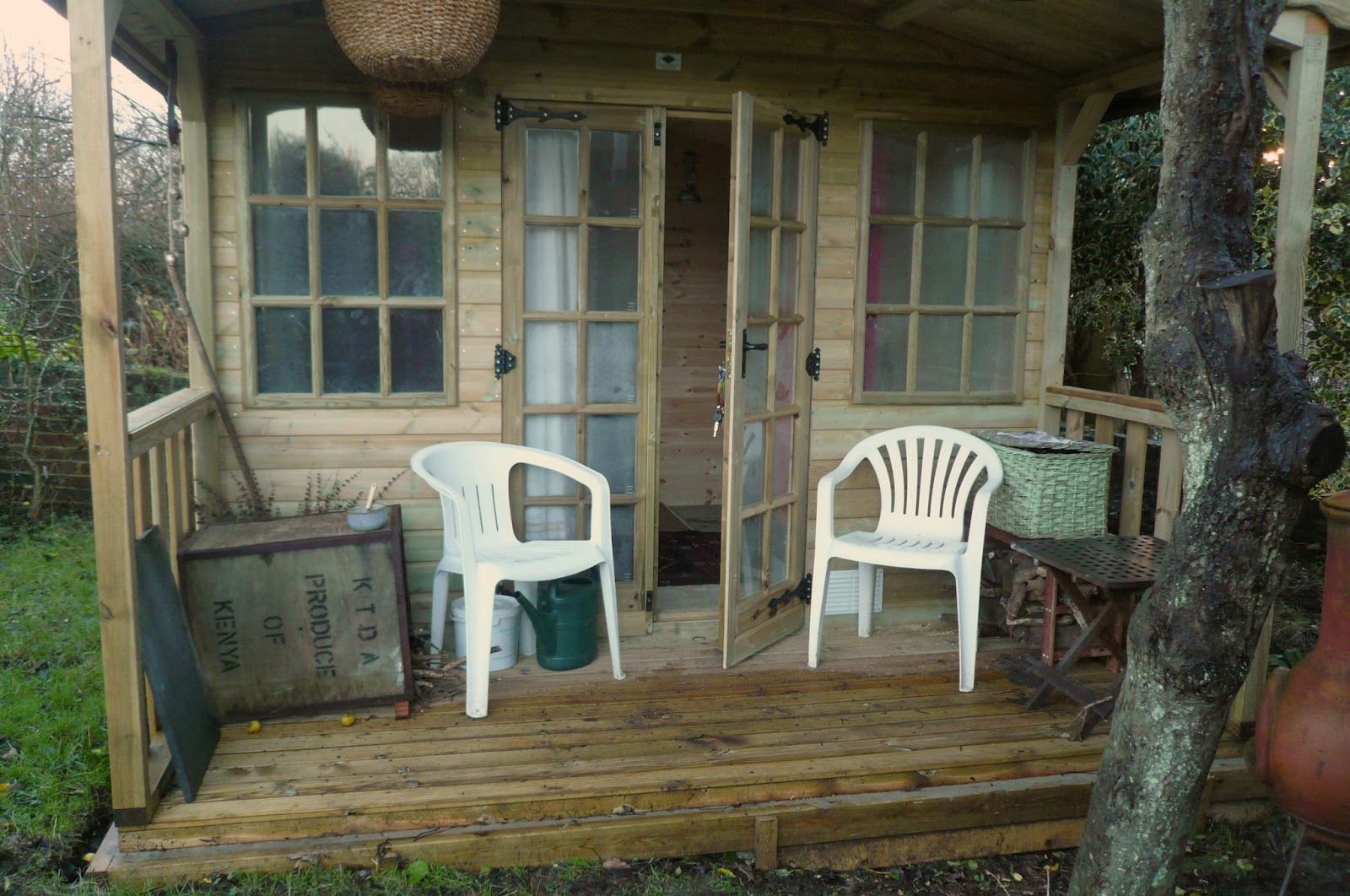 On my verandah I have two hideous but sturdy and comfortable plastic garden chairs.  They are as happy indoors as out, so will be drafted in when guests come.  My bed with its cushions makes a comfortable sofa for three, and the rocking chair makes a sixth seat.  My little table can also be a seat if necessary, but it’s big enough to put six coffee cups and a plate of biscuits on too.  Five people generate the same amount of heat as a one-bar electric fire, so if six people came to see me in little Komorebi – even in the winter – we’d be more likely too hot than too cold with the stove alight.  But that wouldn’t be a problem, we’d just open the door and the window. 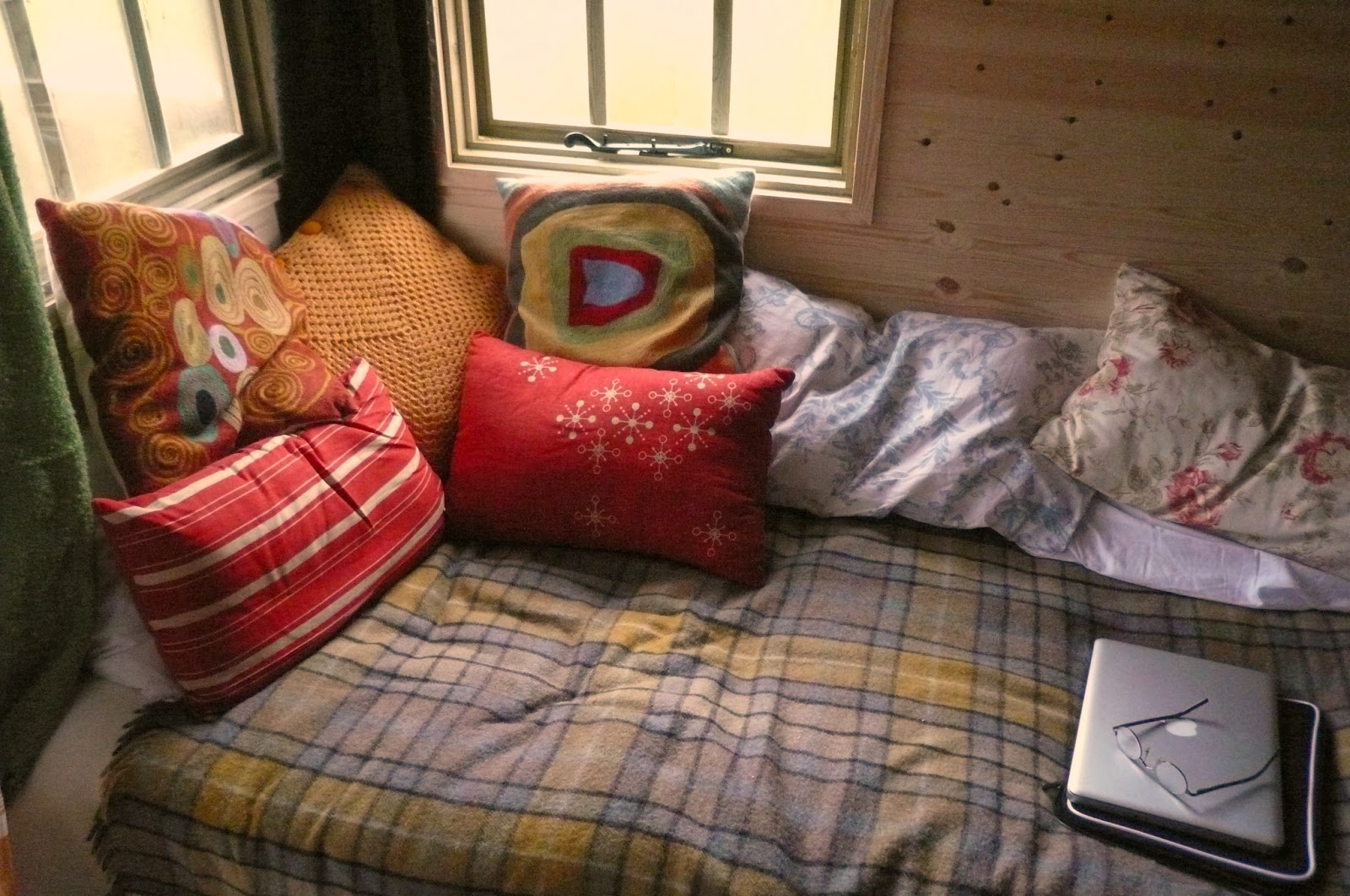 The imperative for Komorebi came from my own soul’s longing – perhaps I am a natural poustinik or something – but there is a secondary motive.  I do have a sense of trouble coming; we in  the Western world (and, sadly, our habits are catching) cannot continue our unsustainable growth economies any longer.  If we don’t stop right now, we will have signed our own death warrant.  What stops us stopping is addiction to comfort and convenience.  But if we don’t stop of our own free will then death, disease and disaster will stop us; there’s no argument about that, check out the science.

So I wanted to see what I – a not especially strong family woman with no bush skills – could do.  Bluntly, I’m practicing ready for when the oil runs out and what we’ve always had in my lifetime shows up as a fleeting luxury.  I may be alarmist, perhaps even ridiculous; but at least I will be ready and even now it will make my money stretch. 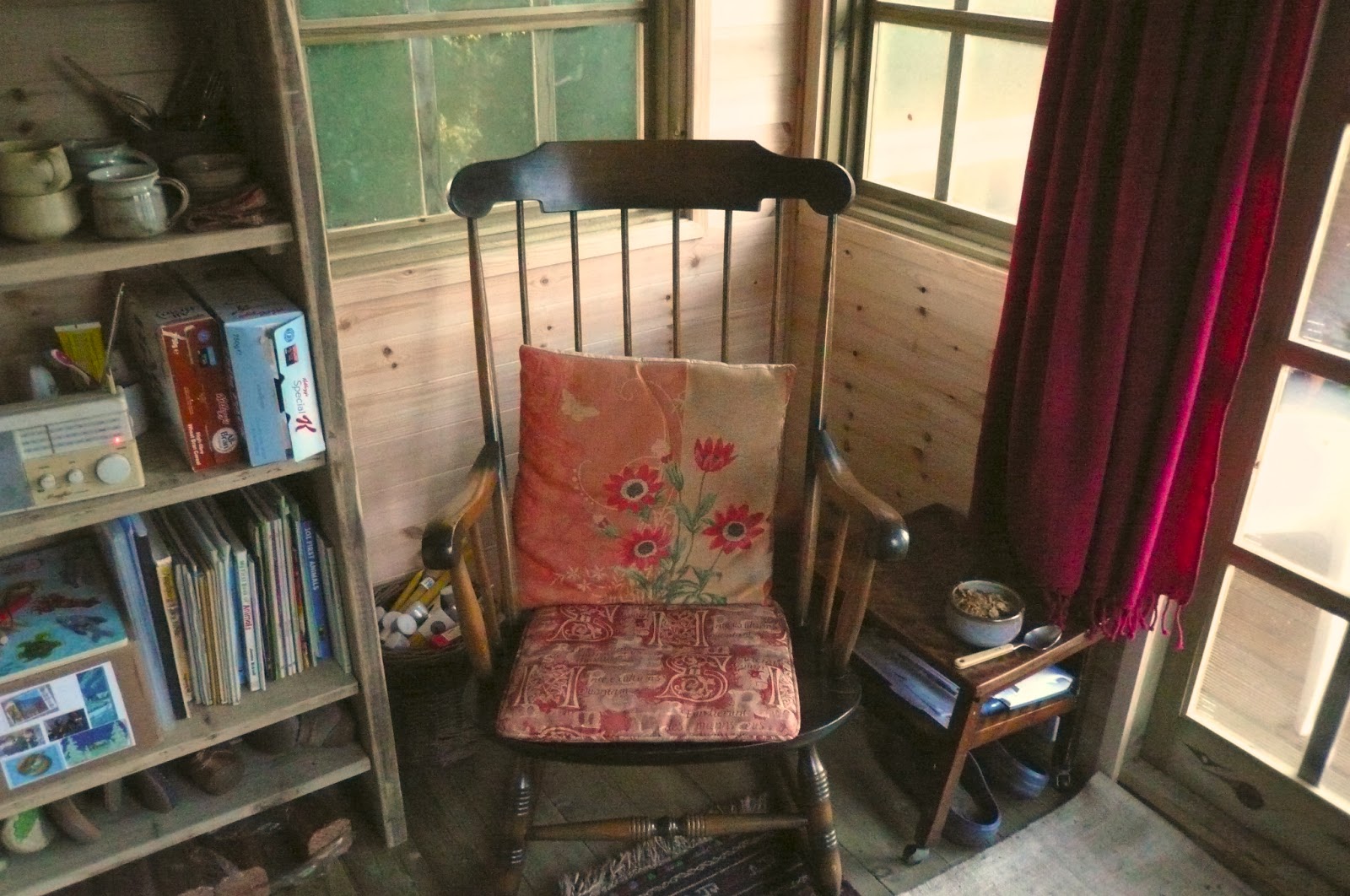 and regardless of what Badger says, i think living in a shed in the garden would be just my cup of tea and plate of biscuits!

Oh, yes, just what you said. More attached to the earth, not all tied to pipes and wires and things.....We've had such a lovely time here being snowed in and living by candles and heating water on the woodstove. I could live like this always.
For me it was The Little House books, the thought that a family could pack everything they owned into a wagon (!) and journey far away and build their own snug home in the woods, and then pack up again and go build a home on the prairie. Sigh....
I chuckled with delight that the Badger does NOT want to live in a hut in the garden but likes to visit you there. The Manimal doesn't even want to live in the loft of his own house, way up here away from everything...but he does like to visit me way up here where it's quiet and uncluttered. And I most definitely DO want to go live in a hut in the garden. Opposites attract, as they say

I enjoy the comments of your readers, Ember! And reading your thoughts about Komorebi make me think there could be a book in the making... ?

Someday I should like to sit my hideous bottom on one of those hideous chairs, and I'll try to stay for only two hours. xoxo

Roll on, that day! You can park your delectable derriere on my rocking chair :0) xx

Oh, Sr Pen, it's lovely. I've been wanting to say that for so long and my poor old computer has less and less connectivity every day so comments have been beyond me. Today, however, I am using Father M's working computer and can. Komorebi is beautiful!

I used to live entirely alone (now it seems the Lord wants me to give space to people who need somewhere to be for a while) and was once visiting a monastery where hardly any sisters spoke English or French. I was alone one day with one of those non-English, non-French sisters and she, mistaking my circumstances, introduced me to a bunch of pilgrims as a “poustinitsa”! They flocked around me, marvelled, kissed me. I was so embarrassed and had not a word of Romanian to explain myself with. My hope is that if I ever go back I will actually be one!

Sr Margaret! Hello! How lovely to hear from you. You are in my prayers, and I wonder how things are going with you, so it's a treat to have a wave from Edinburgh. May the Lord Jesus enable to acquire a working computer; you must feel a bit cut off sometimes. xx