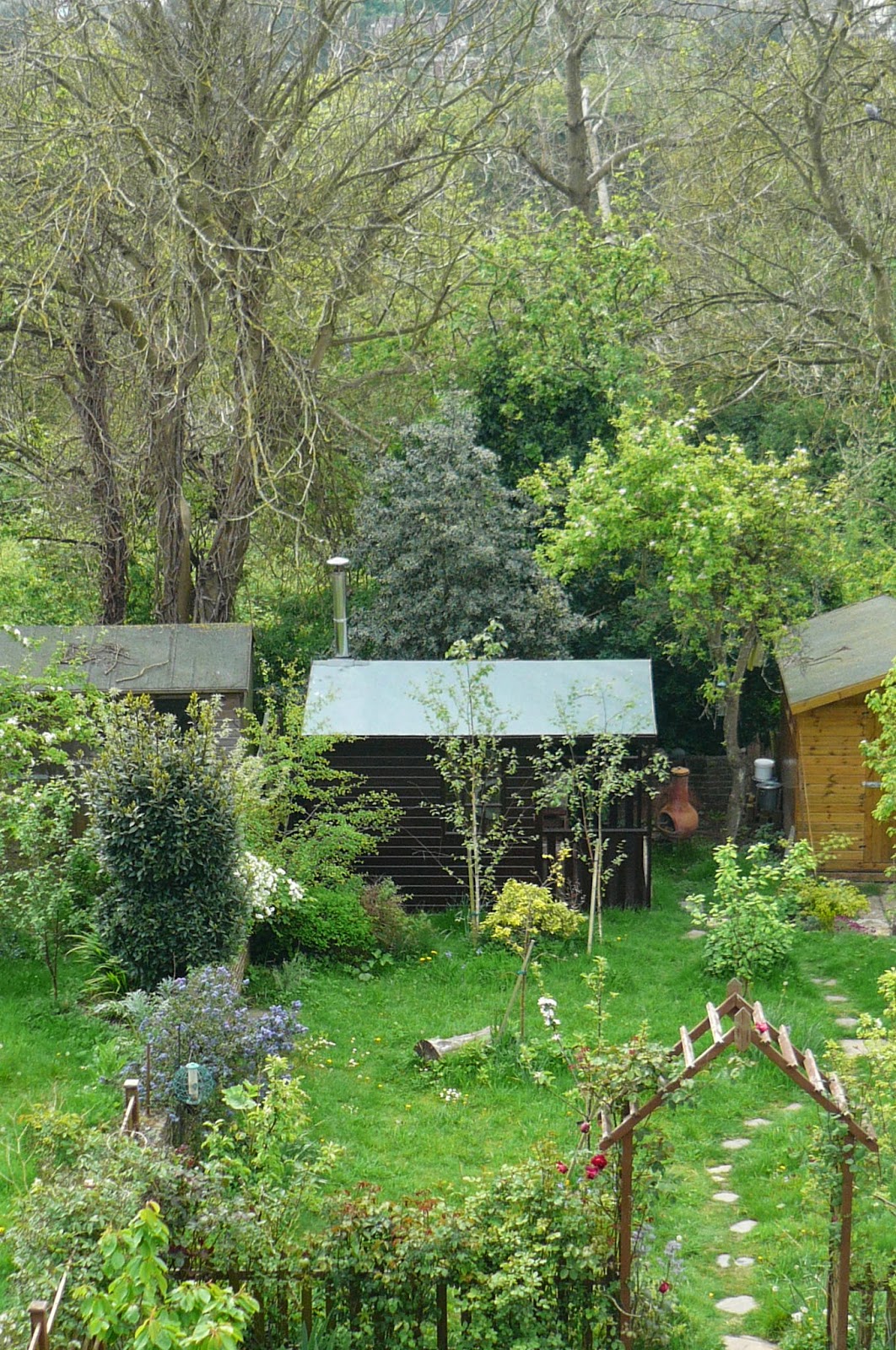 Last winter was the wettest since records began. All the signs led us to expect a long, harsh spell of cold – and that’s what happened in the US. Our weather usually follows suit, but things turned out differently. Instead of the anticipated snowfall came rain rain rain.

In the middle of the winter, Komorebi was built.  Just what I’d dreamed of; finally, the tiny house I’d been wanting. We have a life rule of avoiding debt so far as we can, but the Badger put a lot of the cost on his credit card so we could get it up and finished once we’d decided to go ahead and do it.

I love Komorebi. It’s just what I imagined.  And it lives up to it’s name.  Komorebi, the Japanese word for the dappling interplay of light as sunshine filters through leaves. The dancing of light and shadow are all round and inside Komorebi. It is full of peace.

I’d been researching and practicing off-grid living, to figure out if it’s feasible to entirely live in so tiny a space in an urban/suburban setting. I verified, yes – it definitely is. Easily.

Then the path suddenly took a surprising twist. I had that health scare with the mole on my leg requiring emergency attention.  The doctor was sufficiently alarmed by it that he booked me two appointments in two separate hospitals so I could take the quickest one.  So I had that removed and biopsied, and just this last week came back the results that all is well. ‘A few irregularities’ whatever that means, but basically all okay.

However, in the intervening weeks/months, the whole thing spurred me into a huge health upheaval, looking again at Gerson dietary principles and macrobiotic diet etc.  We got a very expensive Champion juicer (excellent, I recommend) and a water distiller, both of which became a high-profile part of daily life, as did the coffee enemas to de-tox the liver.

I must say it all worked wonders. I started to lose some of the weight I’ve accumulated, and began for the first time to get to grips with understanding the mysteries of the liver, spleen, gall-bladder, kidneys and gut – not only how they individually and separately influence overall health, but how they govern emotions too.  So it was all a huge physical/psychological/spiritual/emotional health journey, still ongoing; and I’m grateful that mole showed up to be my teacher.
Two things came about that changed things profoundly and unexpectedly.

In the preceding months I’d been, as I thought of it, drifting further and further out to sea; becoming more and more weary and emotionally disconnected, longing desperately for solitude and peace.  This happened to my father, who had the same struggles with his liver and gall-bladder as I do (but worse, probably because he consumed prodigious quantities of red wine and cheddar cheese).  He craved solitude – had to have it.  Me too.

But after I’d de-toxed my liver big-time and gone onto eating mainly whole-grains and vegetables, with some herb teas and fruit juices, plus a restrained amount of fish and my fix of Earl Grey tea, I changed. I wanted to be close to the people I live with, not out on a limb. I wanted to share the same nest space as the Badger. Always. Unexpected. Different.

And of course the juicer, distiller, and enemas refocused everything onto electricity, bathrooms and water.

Meanwhile, as I got my head round the complications of a new health regime focused uncompromisingly inside our regular house, the rain fell and fell, and things inside Komorebi began to go mouldy – books, everything made of wood or fabric.

As I don’t own much and the Badger likes (I think!) to share his night nest up in his attic eyrie with me, this was no big deal. I just ferried it back into his garret.  My mattress went to my grandson whose bed was in need of an upgrade, and he slept better at night as a result.

Hyperfocus is a characteristic of my thinking, so while I was preoccupied with health and juice and whatnot, I couldn’t pay attention to much else.  But now I’ve got into a more nonchalant place with it. This is what I eat every day: oatmeal made with a mixture of rolled oats and steel-cut oats, oat-milk and a pinch of sea-salt; brown rice or quinoa with dahl or steamed veg or stir fry; salad, sometimes with a little fish; sometimes a big dish of baked root veggies and onions instead of the salad or the pulses and grains; a big glass of fresh juice; herb teas, Chinese medicinal teas, Earl Grey tea.  It’s delicious and familiar and I don’t have to think about it much. Sometimes we eat out in and Italian or Indian or Thai restaurant, when I bend some rules but not to worry about – it’s only occasional.  And on the rare occasions I am a guest in someone else’s home, I joyfully take the opportunity to stuff my face enjoy forbidden foods.

So that’s all rolling along fine, but . . . what about Komorebi? Was it all a hugely expensive mistake? I couldn’t believe so.

My children are wise. My youngest daughter counseled I wait, see what was emerging.  That felt right – and Komorebi is such a potent space, it is a Light anchorage, a healing place.  I thought it might be for prayer or healing, except that I never see anybody much – I am just hidden away, silent and solitary in most of my days. Meanwhile it has become a place to pray and sit and be, to find quietness and listen to the birds sing – and for music practice. Alice takes her flute down there, Fiona her guitar and Hebe her violin. It’s a good place to play or sing.

The Badger painted it for me with the wood preservative I picked out – I chose the colour most exactly nearest to the shadows beneath and between the shrubs and trees.

Now the leaves are unfurling, and the young trees establishing in the little orchard we have made, this is what Komorebi looks like. 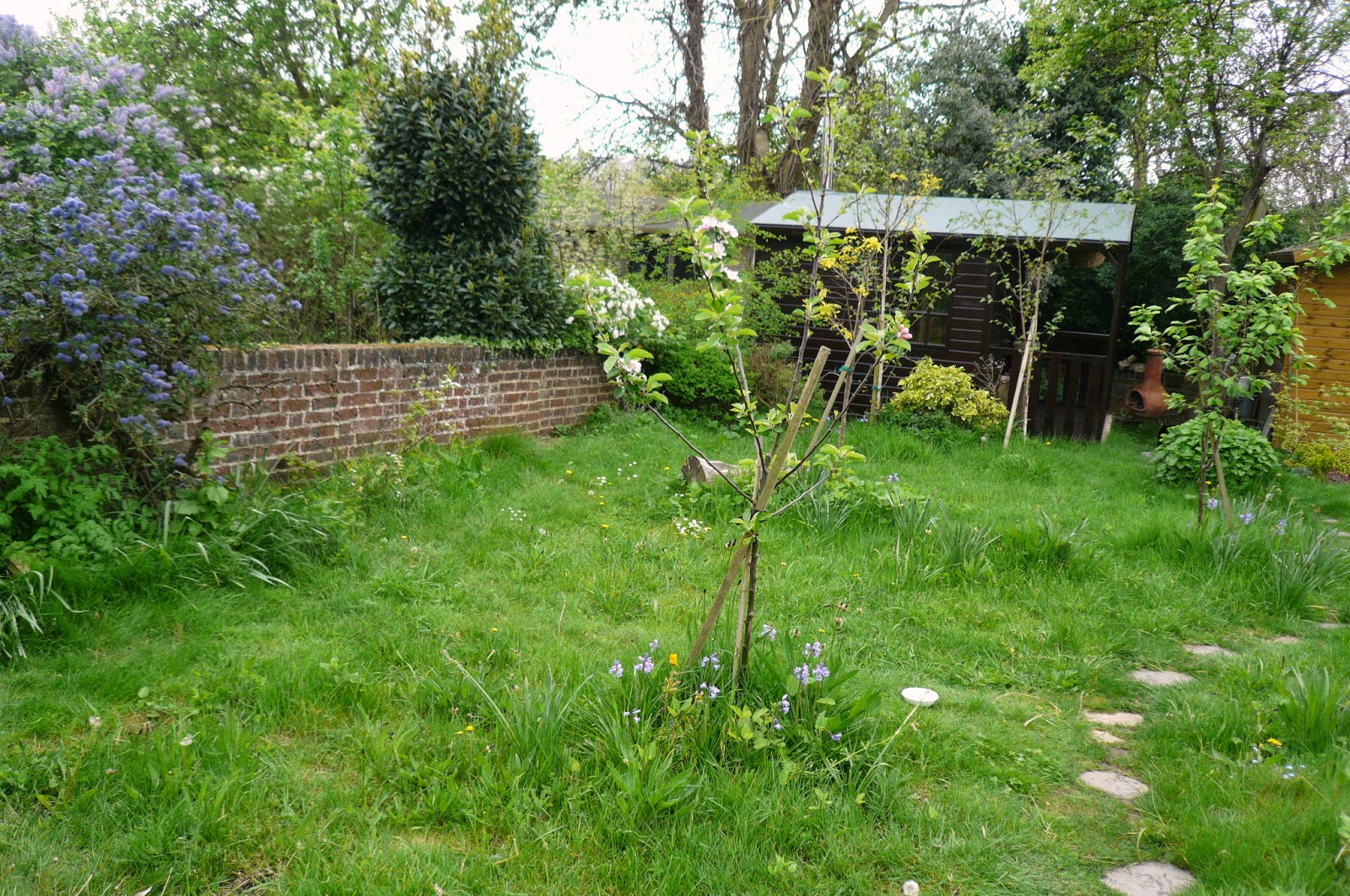 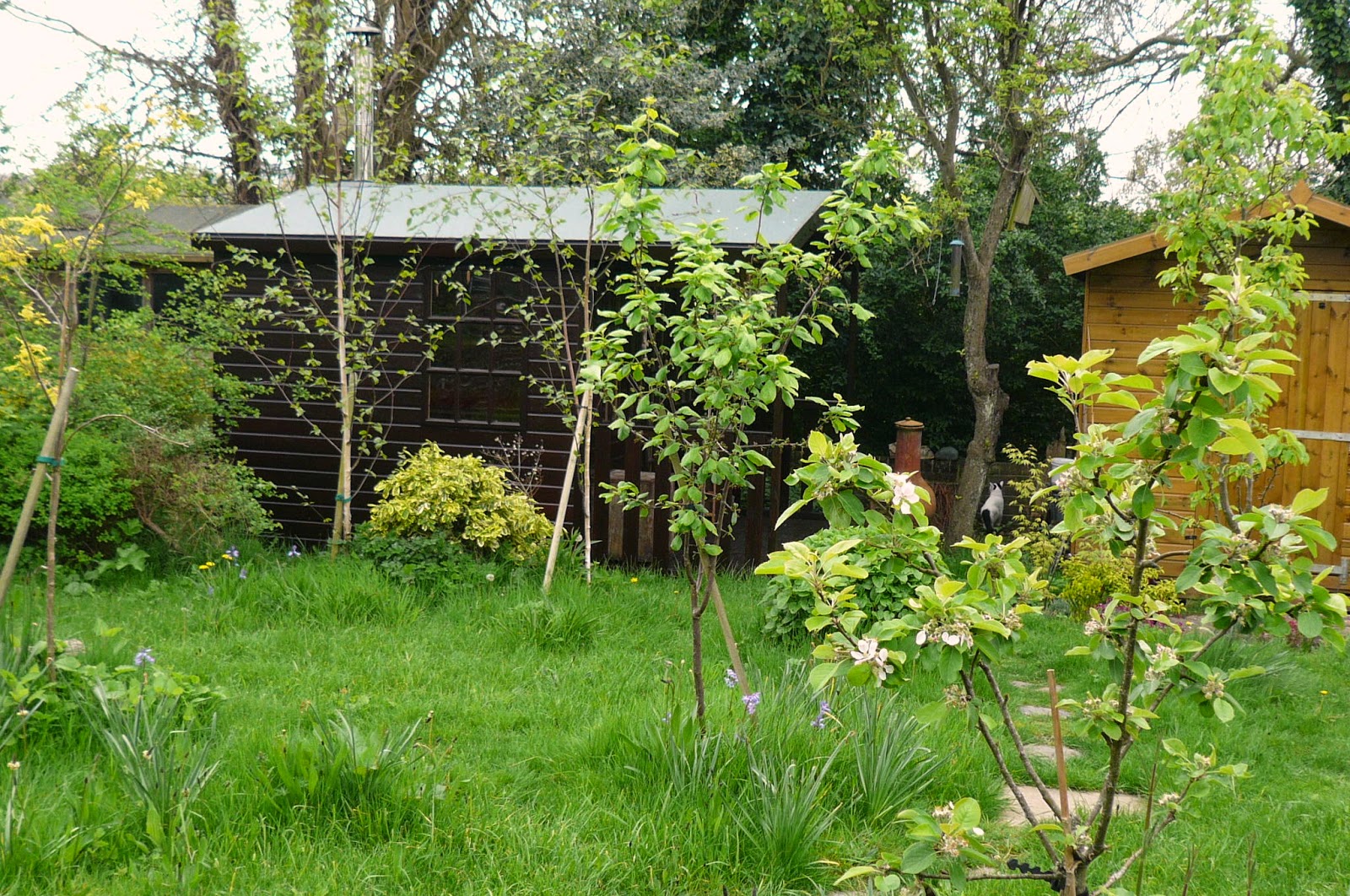 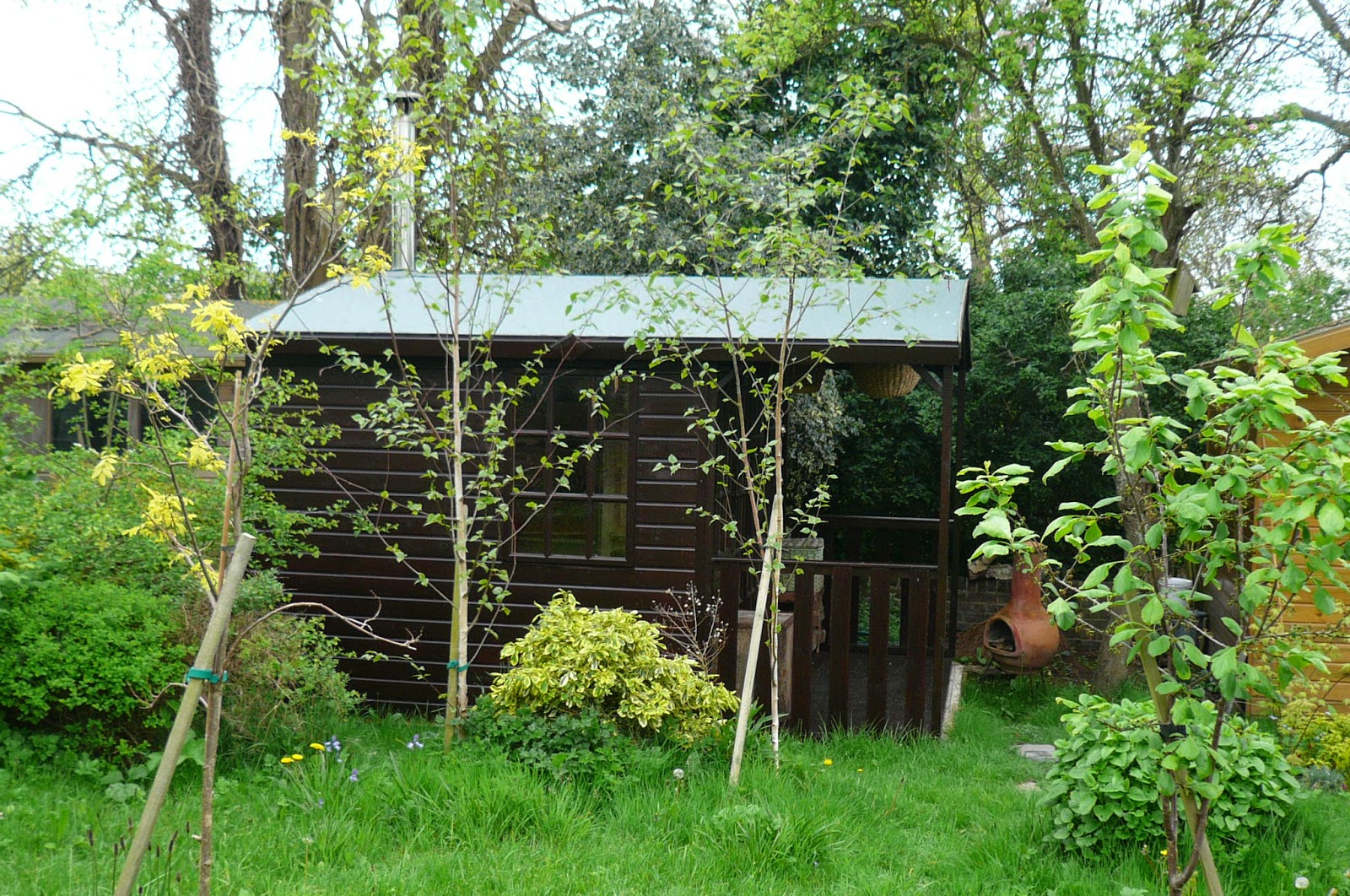 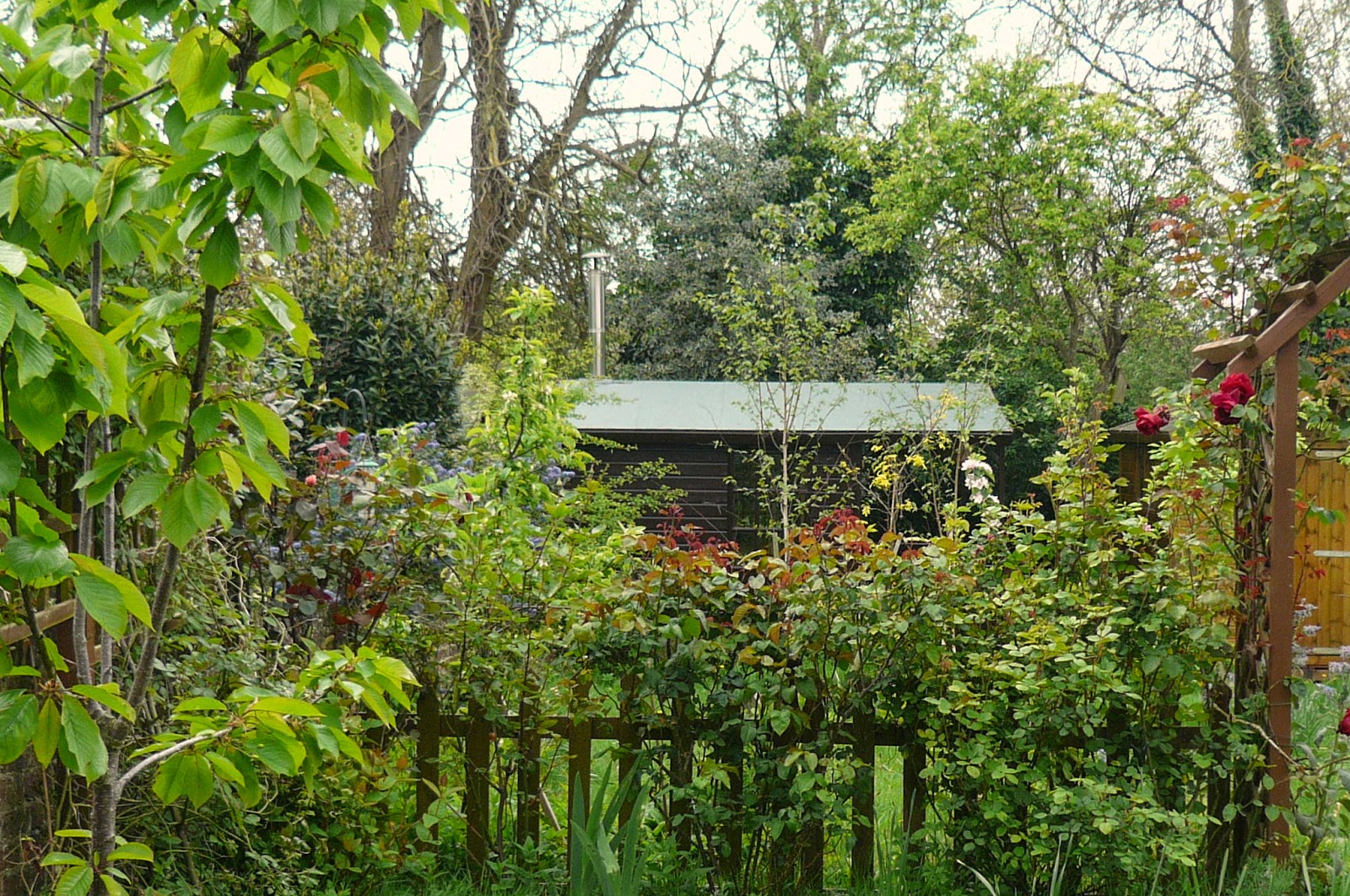 At the back of Komorebi grows this plant. 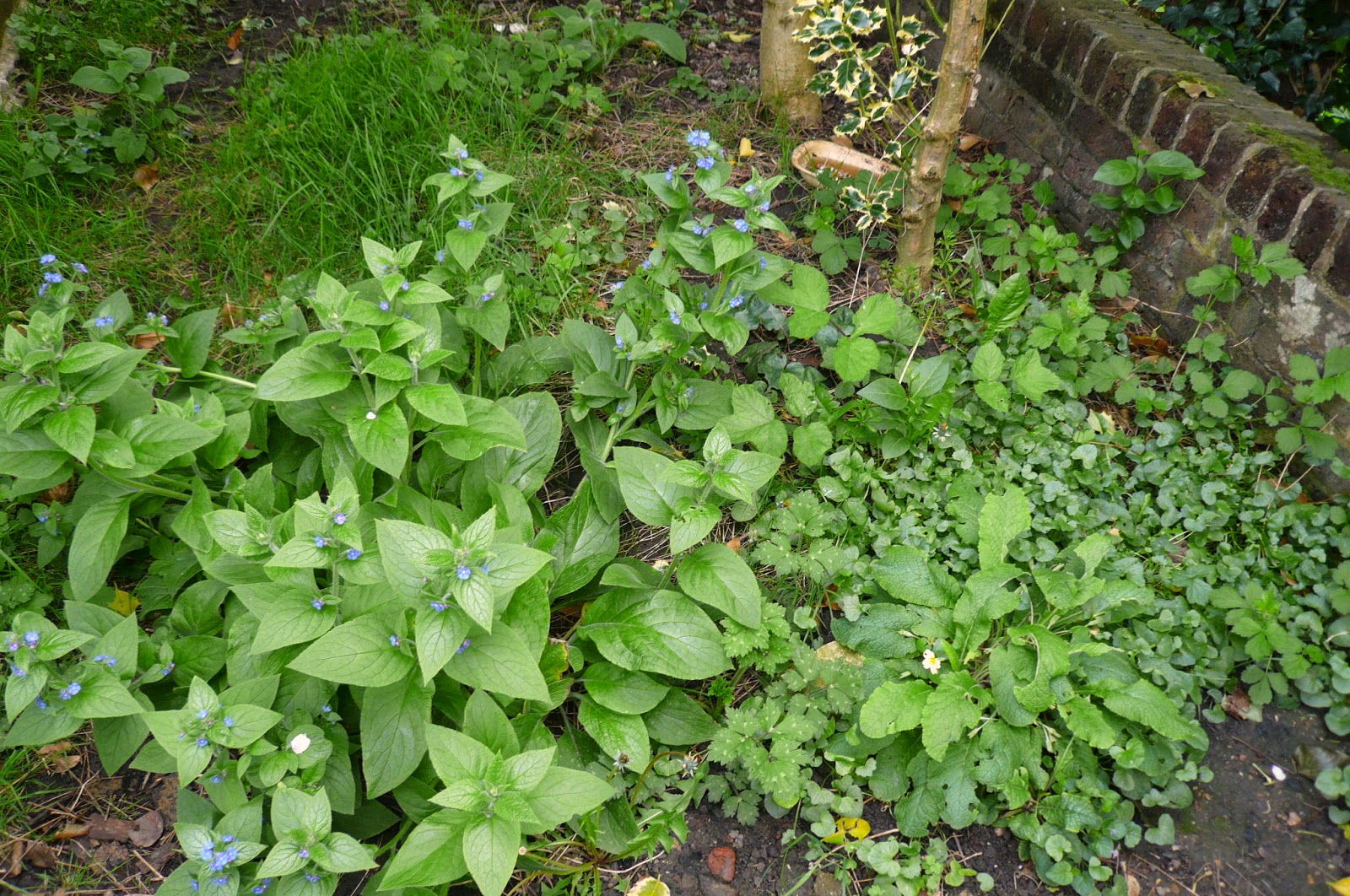 Mucilagenous, hairy leaves and stalks, starry blue flowers with very pointy sepals.  We though it was borage, but I think that’s wrong – borage has pendulous umbels of flowers and this does not. Anyone know what it is?
Posted by Pen Wilcock at 12:33

Thanks for the Komorebi update Pen, I had been wondering :)

It doesn't sound like a mistake, just unfolding in a different way to that initially expected. This happens so often!

So glad to hear your tests are all showing good results. Such a relief for you and yours.

Sorry I don't know what it is but I have loads of it in my garden. It appeared suddenly about three years ago and is in danger of taking over. The trouble is it is quite pretty.
I do hope you find out what it is.

It's good to know there is somewhere silent for a few days regathering and if it's at the bottom of the garden you don't have to deal with trains and buses and all the things that exhaust you on the way to a retreat and on the way back make you feel you haven't been to one. It's also - as you have found out - shareable.

I like the thought that Komorebi can be whatever it's needed to be at any given time. An off-the-grid refuge, a music cottage, a house of prayer, a nap shed, a tea room, a thinking cabin, a light observatory.... And I am so glad for your good health, Ember. xo

I completely agree with Julie B. Wishing I had a Komorebi. :)

:0D Every home should have one! xx

Pentaglottis sempervirens, aka green alkanet, I think. Maybe it's come to help you make purple dye for your clothes (?).

Glad to hear you good news about the mole biopsy, and v best wishes.

Yep, green alkanet - very pretty, but a prolific self seeder. I recommend pulling many of the plants up once they have flowered for the year and leaving just a few to seed.