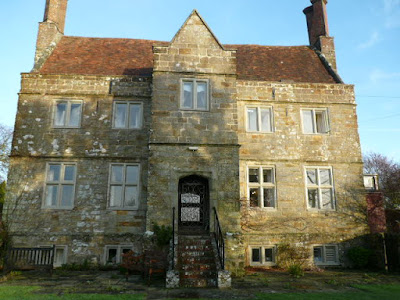 I’ve been putting it off, putting it off – and in the end I just knew I couldn’t write it. I am so heart-sick right now, so grieved, at the foul stench of Mammon coming off British politics. The unprincipled, two-faced, back-stabbing jostling for supremacy and position. The unaccountability, irresponsibility, the disregard for the poor and vulnerable, the greed for money and power. It wrings me through and through every day. It breaks my heart. I wouldn’t know where to begin. I am grieved and ashamed, and so sad. I came to the place where my mind is just slipping off it all out of simple self-preservation.

So I thought I’d tell you about this instead.

In September I’m offering another Quiet Day at peaceful and beautiful Penhurst Place, deep in the Sussex countryside. A place to heal and find your sanity, if ever there was one!

In Buddhist spirituality, “Leaving Home” is the term applied to what I think Western psychologist would term individuation. When we leave behind all we have been taught, all that has been instilled in us, to make our own personal journey of discovery – to make up our own minds and go our own way.

The Buddha was a prince. As a boy, his father kept him very sheltered in the confines of his palace, knowing nothing of poverty, sickness, old age or death. He left home to satisfy his intense curiosity about the world, and learned about its sorrows.

Then he had to do the long, patient soul work of evolving his response.

As well as “Leaving Home”, Buddhists talk about “Coming Home” – when you return to where you started from, but everything is different because you yourself are different now. You have changed, and cannot see things as you did when you set out on your journey.

Thinking about this, it occurred to me that the Prodigal Son made this exact journey – of Leaving Home and Coming Home; of discovering his true priorities, in the face of the sorrow and sufferings life brings.

So I thought it would be interesting to explore Leaving Home and Coming Home in our own lives. What is “home” to you, and to me? In what senses have we “left home” in our own lives, setting out from the security of the familiar to find our own path in life? What were the sorrows and sufferings we encountered on the way? Where are we right now on that journey? And what does it mean to “come home”? Where is home now, for you, and for me, if it is true that “here we have no abiding city”, how can we come home to ourselves, to God?

So that’s what we’ll be thinking about; and you will be most welcome to join us. Just get in touch with Storm and Richard at Penhurst if you think you’d like to be part of that conversation.

I was very sorry to miss the one on 6 July, Pen. I will therefore plan to come to this one - have already booked day off.
- Philippa x

Aaaaaand it's booked and paid for. :)

Well done - so looking forward to seeing you! x

I find your blog very interesting when you touch the subject od minimalism and Christianity. I don't get your turn to left: supporting Labour or Hillary Clinton. How can a christian minister support those in favour of contemporary Holocaust: killing innocenty children in their mothers wombs?

On the topic of Russia: contrary to what is written on pages like "stopwars.com" (most probably sponsored by Russia itself) Russia is the only aggressor in Europe in 21st century. How can anyone really belive that Russia is bullied by NATO after annexing Crimea? In Eastern Europe we are threatened by Russia for centuries, and even after situation in Ukraine you still dare to write that it's all foult of western imperialism. So sad. Better visit eastern Ukraine before writing things you did write.

Critisising your own government on NHS is easy: financing health care is an issue everywhere. Comparing to the rest of the world you spend a lot on NHS and it's not that bad what you get.
Milos

Hello Milos — thank you so much for your comment. I have to point out that you are taking issue with something I did not say (that the political aggression of Russia is the fault of Western imperialism). Very rarely is it the case that all the fault is on one of two opposing sides. Inadvisable political action by the Western powers does not make Russian aggression good, but on the other hand, Russian political aggression towards its neighbours is not a justification for political behaviour from the West intended to bully and threaten. It may appear to help superficially, but long term it does not. A recent example is the UK involvement in bombing Syria. How did that help? We were in haste to send bombers, then built a wall to to stop Syria refugees fleeing to us for safety. Yes, as a Christian I do have deep misgivings about such behaviour.
As for your remarks about supporting contemporary holocaust, killing children in their mothers' wombs, again you are opposing something I did not say. I am not an enthusiast for abortion. On the contrary, I believe strongly in tackling the poverty and inequality that set the conditions in which abortion flourishes. I believe in creating a world in which all children are made welcome, where women are not shamed for bearing children out of wedlock, where families in poverty are helped and supported so that a new baby does not create a desperate situation. Abortion is symptomatic of far larger social issues. Singling out abortion as a social evil, while ignoring the political and social conditions in which it flourishes, does not strike me as constructive.
While I respect your freedom of thought and your right to a point of view, I do not appreciate your expressing it by putting words into my mouth that I did not say, and misrepresenting my approach. I note you recommend I stick to minimalism and Christianity; to my mind, Christianity that does not follow through on political justice is of very little use to human society.