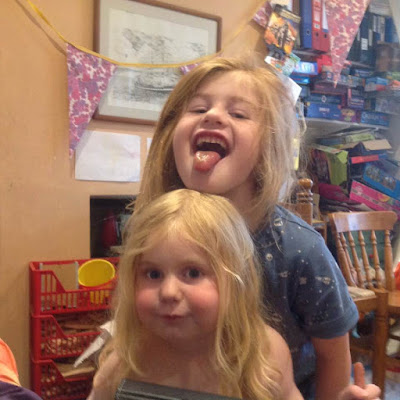 Sometimes, at a subliminal level, something catches my attention but I don’t notice it properly because my conscious mind is otherwise engaged when the thing happens.

What (usually) follows is that the event/incident continues to quietly twitch my sleeve (“Psst. Hey, psst.”) until I slow down and look at it properly.

This happened in the last few days. Today, I stopped and looked properly at something that had been nagging away at my hindmind since Sunday.

Often but not always my daughter Buzzfloyd with her children The Blur (7) and Little Sardine (3) come over to our place on Sunday afternoon.

Now The Blur is 7, he is thoughtful, quiet, sophisticated, and highly knowledgeable about dinosaurs, super-heroes, ninjas, transformers, and other subdivisions of the essential.

Further, she has acquired a new and distinctly strange voice – what can only be called quacking. Loud, insistent, not at all easy on the ear, and arrestingly odd. She no longer speaks, she now quacks. Almost all the time.

Last Sunday, she followed me upstairs into the attic I share with the Badger, objecting to absolutely everything in a loud quack. I had with me my bum bag (US fanny pack), which I left on the chair as I no longer needed it downstairs. I collected the thing I’d gone up to fetch – a soft fleecy blanket for her to snuggle into while she ate Hula Hoops and watched Frozen downstairs – then turned to go.

Watching me closely, “Your handbag,” she prompted.

At the time, focused on sorting her out with a movie-watching kit so I could get back to my interesting conversation with her mother, though I knew what she said had caught my attention, I didn’t stop to look at why.

But today it broke the surface and I saw it.

When she said “Your handbag”, it was in a gentle, cheerful soft voice – her old voice, her true voice, quacking temporarily suspended.

And it told me that she notices and cares about others – somebody who looks out for the other person, has their interests and concerns at heart. Because, well, you know women and their handbags. Inseparable. If you have ever taken an old lady to the hospital – even if all her handbag contains is a half-eaten mouldy peach, an empty wallet and a dead torch – she will cling to that bag as if her life depended on it. A woman’s handbag has her money, her hanky, her spare shopper, her glasses, some sweets, her bus ticket, her credit/debit/reward cards, her phone, her house keys, her car keys – and in my case a crow call as well. A woman’s handbag is VITAL. And I realised that Little Sardine has taken this in.

So for that moment, because she cares about me (she sometimes asserts in a loud quack that I am her friend), she abandoned her channeling of Donald Duck and Oscar the Grouch, and let her true voice emerge for one moment. And when it did, that was to look after me, to see me right, to make sure I had not forgotten that most vital part of Everywoman’s equipment: my handbag.

What a sweet kid, eh? 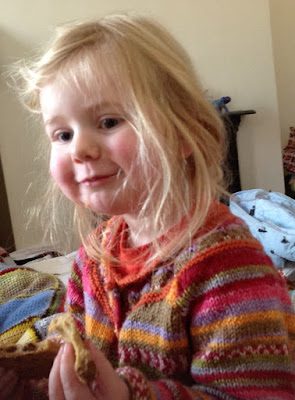 Oh oh!! What a lovely post. How wonderful to be noticed in this way. And by that I mean both of you. That she is looking out for you and you are able to see her true self for all of the annoying quacks. What a delightful gift. I never had a proper grandmother relationship like this so I can only look on in envy.

My grandchildren are darlings. They have very good and intelligent parents who are doing a fantastic job - all of them neuro-atypical, theirs is quite a household! I am in fact an awful grandmother. Unhelpful, rude and tetchy, only able to stand any kind of sustained interaction for a couple of hours max; but we do somehow really see each other. They understand. There is a living thread between us.

I always love to see pictures of those two. So The Wretched Wretch is now The Blur. That's an amazing transformation. :)

I have a granddaughter who growls like a tiger quite a bit. Very deep in her throat with a big grin and wide eyes. So no ducks here, but fierce beasts are always lurking.

Thank you for sharing about your family, dear Ember.

A tiger! Who knew? I always think our grandchildren clearly come from the same Nordic stock. They could easily pass off as one family, growling and quacking their way through the world. xx