You could not make it up. Life goes on surprising me, pouncing from unexpected angles and catching me unawares.

So I was pondering on what the heck to to with my hair until it grows long enough to tie back.

So I looked online to see what's happening in zandana-world nowadays.

And they have these chef's caps. 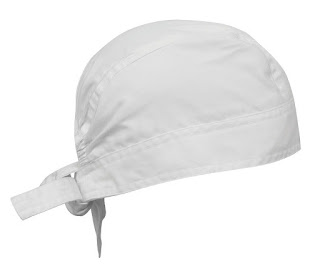 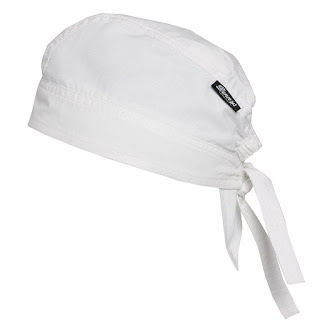 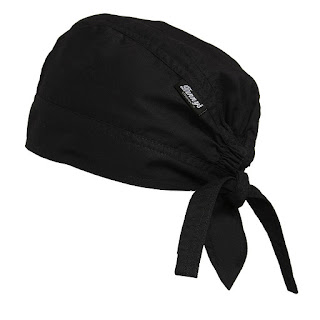 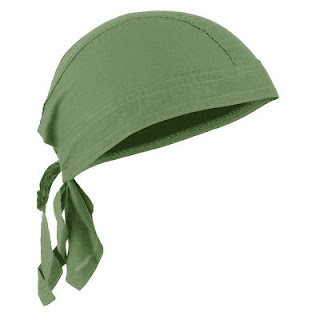 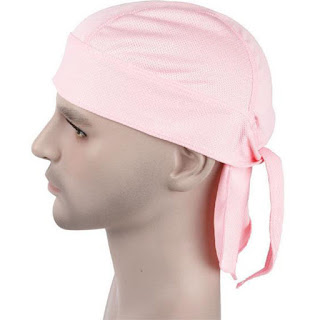 Now, in the UK, Amish = Seriously Weird. Nobody, anywhere, wears a prayer kapp. Even my auto-correct wants to alter "kapp" to "app". Even the women who live in Plain-Dressing intentional communities have fiddled about with their headgear to make it look more like a regular scarf.

And yet, here we are — men wearing what is as near as dammit an Amish prayer kapp, and friends, that's just fine! Nobody turns a hair.

I don't know about prayer kapps being weird, I think that's weird. Not that the men have those hats, I mean, but that if you call them a durag/butcher's hat/biker's bandana/chemo hat, it's all perfectly acceptable, but you say it's a prayer kapp and everyone draws back a little and makes their witty little jokes and quips about you.

I don't think I'll ever understand the human race.

You have made me smile. I have washed so many chef's caps. When I nursed the older nurses said they loved the very old frumpy caps because it hid all their hair. I have worn a modern [a[er nurses veil just once. It was a pain and offered no protection. So your post bright back some memories of washing, theatre gear and graduating from nursing.

There you are! My point exactly! If it's a nurse's cap that's fine (even if it's considered frumpy) — but a *prayer* kapp; weird! Isn't our society interesting! Our attire is full of language. Meanings and signals — some understood, some not. The many forms of observant dress.

we have lots of amish and mennonites near us. the amish 'kapps' are larger and usually include some pleats. the mennonite women wear simple circular head coverings that are held in place with pins but don't offer much in the way of controlling our ungovernable hair! i like those chef's caps though. they would cover a multitude of hair sins : )

These are what I wear. The men's small fits well but I do have a small head. They are in Jordon but deliver all over the world. Sorry I couldn't post a picture here.

Thank you, Joy — having the link works just fine; lets us see all the colours!

I like to wear hats, wooley ones in the winter, ball caps in the summer (so much better than sun glasses). But I cannot pull off the bandana type look, it just looks odd on me, and when I tie it, no matter how I try, I always seem to get a little bit of hair caught in the knot and it drives me crazy.

You look lovely in your recycled kapp, you always radiate peace and goodness.

Peace be with you,

That little bit caught in the knot! Oh, yes — I know just what you mean! I'm so glad you think I radiate peace and goodness (very kind of you) — I've been in a right strop today! Dealing with professional incompetence in Ones Who Shall Remain Nameless. I think the last email I sent radiated intense irritation. Ah, well. Nice to hear from you, friend. xx

There is a quiet dignity to this look that I really like. Partly perhaps because I myself lean a bit towards the undignified end of the spectrum.

I do like your artistically refreshed inspiration boxes. A friend stopped by recently and saw a stack of cigar boxes I had brought home from my brother's house. He gave me a puzzled look that seemed to say "why would you want cigar boxes, you don't smoke". Well it is true, I don't, and my brother doesn't either, but the boxes are lovely and of a useful size. They just need a bit of redecorating. I was thinking to recycle some wrapping paper, but now you've got me thinking I should use them as a place to put some inspiring reminders instead!

Ah — you are commenting on the other post with the boxes — my fault, I've been posting so often it's easy to get muddled between one and the other! Cigar boxes are brilliant to keep things in. I think they should be the right size for crochet hooks as well as good for buttons and small stationery items and whatnot. Are they cardboard or wood? I think the wooden sort might be harder for the sticky-backed plastic to adhere to — they might have to be painted instead.

Oops, yes I'm on the wrong post.
I muddle easily, I tend to think of it as part of my charming personality. I'm the comic relief sort, I make people feel better about themselves, haha.
Actually the computer system has been giving me fits and I'm surprised I got a comment in at all. The first few times it slid things over to my office email account and then basically told me this email is not inter-office, tough luck Charlie.
Finally got if fixed, not entirely sure how.

The boxes are that nice dense cardboard with paper over it. I think they should take paint nicely. Again, thanks for the inspiration!

Well done for your determination in the face of all the Electronic Brain can inflict on us!!

"Partly perhaps because I myself lean a bit towards the undignified end of the spectrum." Rapunzel, you've put into words something I've never been able to articulate about myself before! :-D

Buzzfloyd, there are a lot of us, you're in good and plentiful company ; )