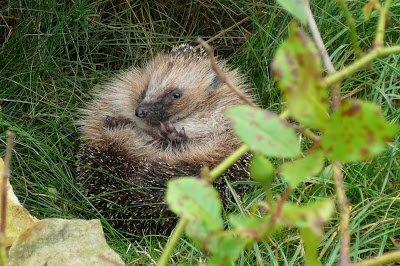 That is not just my fancy?

This last week or two, I have been feeling so beleaguered. In this house, that we moved into last November and had builders in until the spring, the second wave of building works is commencing. We’d finally established a sense of the household working as a community, and begun to settle down. It had begun to feel like home, calm and normal.

But today Alice’s and Hebe’s studio is being ripped apart for necessary work to be done. The boiler must be changed and the bathroom and toilet upstairs altered, and a door to the garden made in the living room downstairs. Our builder is a quiet, courteous, gentle man, and a good craftsman – and he has come to feel like a friend. Even so… we are very shy, private people, and the thought of everything upheavalling again has been unbearable. The pains have come back in my arms and I haven’t been able to settle to anything, wandering round like a lost soul feeling guilty for not applying myself to my work. I go a bit out of orbit, lose myself, feel insecure in the world (plus writing has gone manic with two books that should have been put to bed come back with further work to be done and problems to solve, and new deadlines looming. Aaaagh).

Then two things happened. A Jehovah’s witness showed up on our doorstep wanting to talk to Alice (not home) who had been kind to her. She talked to me for a while, and left me with a Bible verse: ‘Jeremiah 29.11,’ she said: ‘look up Jeremiah 29:11 in whatever Bible you read.’

Then we had a call from Grace. Alice (who’d come home) took the call. I could tell it was really important, but couldn’t tell if it was good or bad. Alice gave a little gasp and went slightly pink and had an aura of intense quiet excitement. I thought either someone had died or won the lottery. But no. Grace had found a hedgehog in her conservatory. I agree that is at least as exciting as dying and a lot more exciting than winning the lottery: I haven’t seen a hedgehog since 1995. Not even a dead one.

So we raced over there with our cameras. It had found its way in through the open conservatory door and put itself to bed in a bag of bags. She’d heard it rustling, and was just a bit inexplicably afraid of its aliveness – and anyway thought we’d like to see.

We took it out of the bag and put it in a sheltered place in the garden with a plate of catfood and a bowl of water. We took lots of photos and Grace videoed it – I think she will put the clips up on Facebook.

Hmm. A hedgehog rolled up in a tight ball against a cold wind and a difficult world. But there are kindly people who mean well and provide rescue from the inadvisable shelter of plastic bags, and offer free catfood. Life is not always as dangerous or frightening as it seems.

And Jeremiah 29:11, it turns out, says:
“For I know the plans I have for you,” declares the Lord, “plans to prosper you and not to harm you, plans to give you hope and a future.”
Posted by Pen Wilcock at 18:27

☺ That particular verse is the one the lady who taught Sunday school on the island for over 50 years had as her talisman. I love finding wild things sheltering in our yard. We've had roos & snakes & little birds & the occassional stray cat.

In my previous marriage, to Bernard who died, we lived out in the country in a little house on the edge of the woods, and it was a bit like the Disney film of Snow White for involvement with wild animals and birds! And Bernard's son found a turkey hiding out in his garden at Christmastime when the turkey mass slaughter happens. It was safe there :0)

I love the photo and the reminders and wonder that wildlife bring to us. How long will the work on your house take? I hope your arms feel better and the revisions go well....

The work on the house *should* be finished by the end of September, I think.
xx

Can you put films on your blog? I can send you some of the videos if you like.

I love that Bible verse, and I think it's nice that that's what the JW lady came to say.

I *think* I should be able to upload video clips here. It'd be great to have it - send me the clips and I'll tinker about and see what can be done.