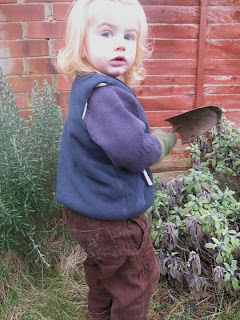 Today is cold and grey.  Relentless rain.  Dismal.  Praise the Lord (that’s what we have to do, innit)!  Cold days make a person hungry, so by half an hour past noon I was feeling peckish and went down from my garret, where I was checking the proofs for The Hardest Thing To Do, to see what we had in the fridge.
Now, when I cook I don’t start with a recipe.  I start with what there is.
We had some cold cooked quinoa from yesterday.  We had some mushrooms that needed using.  We had some oil left from a pot of artichoke hearts marinaded in sunflower oil infused with garlic and thyme.  A few bits of artichoke still there.  So far so good.
We have a frying pan but I don’t cook with that because it’s Teflon coated and I like Teflon scrapings left right outside of my body.  I have a sweet little iron wok but the leftovers were too big for that.  So I took the lid from the blue enamelled cast-iron pot.  It can double as a frying pan.
I put in the oil with the last 3 or 4 bits of artichoke heart, and broke the mushrooms up into it – lovely big open field mushrooms, firm and hearty.  Yum.  I fried them gently in the oil for a while, then added the cold quinoa.  The mushrooms had soaked up most of the oil and weren’t giving off any liquid (that pan is very open, so the frying is drier), so I stir-fried the mixture around for a bit, but it was sticking, so I added a little water.  No more oil.  Oil and I are antagonistic companions.  A little is plenty for me – too much and I have agonising heartburn and a bilious white-coated tongue.  Noooo!
Something else was needed now to make this tasty, so I chopped a scallion in and a handful of slivers cut from a ripe red bell pepper I found in the fridge.  I mixed in some concentrated tomato paste from one of those squirty tubes like toothpaste, and to finally make it tasty enough to eat I added a few shakes of tamari.  Done.  Delicious.
As I sat down to eat it, I noticed how substantial and hearty it both looked and tasted.  The mushrooms were as beefy as meat, the colour was deep and inviting and the flavour was savoury and had a good blend.  It had the same feeling to it as eating steak pie.
I’ve met people who puzzled me by saying they disliked vegetables because veggies are so bland and watery and tasteless.  What? Tasteless?  But then I discovered that what they meant by a carrot was not the same as what I meant by a carrot.  I meant a vegetable that had grown in someone’s garden or on an organic farm.  They meant the budget range from the supermarket.  When I ate their vegetables, I could see what they meant at once.  And their mushrooms looked like cunning fake fungi made from spongy polystyrene.
Tell it not in Gath, but my grandson (the Wretched Wretch) eats mud.  As he roves around the garden at the back of his family’s little cottage, he nibbles the grass and the herbs, and the mud.  This is not because he is a mineral-deprived starving vegan.  Don’t confuse their household with ours, please!  His daddy grew up in Georgia and knows how to cook!  It has taken all the might of the Wretched Wretch’s mummy applying her English brakes to slow him down from eating not one type of meat in a casserole but two or three.  The Wretched Wretch snacks on sausages and no block of cheese is safe with his mother.  Vegan they ain’t.  But he still eats mud.
However, before puckering thy face in horror and saying “Ewww!” let me point out we all eat mud.  Mud is the tastiness in vegetables.  If we grow vegetables in sterilised compost or water with chemicals added; then, by gum, that’s what they’ll taste of.  Thee can tell this in Gath, because the Philistines need to know it: mud is what makes veggies tasty – organic mud that the worms and beetles have mixed and enriched, mud that has had plenty of well-rotted poo dug in.  The potatoes and carrots and lettuce that grow in that, loved by sunshine and blessed by rain, are firm and full of flavour, with a good dense texture.
Quinoa, artichokes, mushrooms, peppers, scallions – one might say those are just the middle-men.  What I ate really was rainclouds and sunbeams and a hefty spadeful of good earth.  It was delicious.
The way earth grows veggies is clever as clever;
I think I’ll stay vegan for ever and ever.
With apologies to A.A.Milne, God rest him.
.
Posted by Pen Wilcock at 14:19

Email ThisBlogThis!Share to TwitterShare to FacebookShare to Pinterest
Labels: what vegans eat

Hooray and blessings for dirt! Sounds like a yummy dinner to me!

I eat more delicious and colorful and beautiful meals now that I only eat plants than I ever did before. All my life though I was one of the veggies-are-gross-hand-me-the-chicken-and-cheese type people. I can understand. Processed foods taste terrible, and processed vegetables are probably the worst!

Sometimes I think the my old friends and family wonders what happened to me now that I choose mushrooms over chicken nuggets. The answer is: organic food and gardening!

My daughter, for reasons I won't explain here, once had cause to eat a small mouthful of frozen spinach. From a bag. From a supermarket.
Screwing up her face in disgust she said 'so THAT's why all the other kids don't like spinach' (whereas she will happily eat it til the cows come home. Or later yet.)

I buy lots of vegies, and have lots of dried and canned peas and beans, then it doesn't matter so much about the meat. If I can afford it I'll buy it, otherwise I look around www.taste.com.au for some recipes with what I have left. After that, google.

Had an emergency supply of frankfurters in case of a power outage, found that so we are having this for tea.
http://allrecipes.com//Recipe/yellow-split-pea-and-frankfurter-soup/Detail.aspx

Hi Ember,
we just got home from vacation and there was your wonderful package! Sooo many coverings and only one head,albeit a big one :)
Here is my thought,I'd like to keep a white and black one and of course the red plaid one but the rest should go to other women, did you get other requests? I'd be happy to pass them on to people.Please believe me,I really appreciate your generosity but in the spirit of sharing the bounty? Let me know!
I've been having fun catching up on your blog too!
Bleesings
Gerri

:0) Pass on whatever to whoever! Keep the ones thee'd enjoy to have and pass the rest along x