The less I own the better I feel 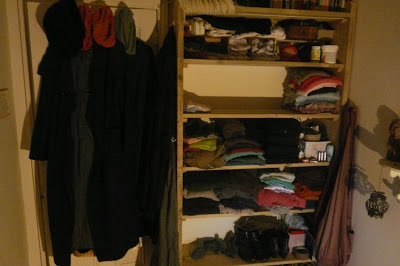 The other day, Daisy asked about my 365 chuckout – this was where I disposed of one possession for each day of last year, and got rid of two things for every thing I acquired.

“How do you feel about it now?” Daisy asked. “What difference has it made?”

Well there are two domestic layers to my life – the Big House and the Tiny Room.

In the Big House, the chuckout has been helpful.  We had a lot of extra stuff from putting two households into one, that we didn’t want to get rid of because the things were all useful or beautiful.  During my chuckout I got ruthless with possessions in that category, which has left the house a very peaceful space to be.

Although we are all family members living here, because we decided to live together as adults we don’t have the thing you get in most family houses of accumulated unquestioned junk that no one sees any more because it’s always been there.

We keep our personal possessions in our own rooms mainly, except for a few bits and pieces that stop the areas of common use looking bleak and unlived in.  So we have bookshelves with the Badger’s (mostly) books on, and on the wall some pictures either painted by or belonging to different family members.  We have Hebe’s dysfunctional clock, and a Turkish lantern (only a bit of tat but it’s pretty), the Wretched Wretch’s toys, and one or two other odds and ends.

So the 365 chuckout left the Big House with much more room to breathe, all the paraphernalia gone and nothing left that’s not in frequent use.  Talking about this over supper, one of us also commented that she has acquired the habit of looking at everything she has with a question in her mind “Do I still want to keep this?”  Sometimes the answer is simply “Yes”, but she’s found an increased inclination to just pass things along.

Then in my Tiny Room, not a lot has changed – I swapped quite a lot of clothes both in and out during the year, but have ended up with spaces on the shelves and things to wear that I like and feel like who I am.  The clothes I have now speak to the Plain yearnings of my soul while fitting in with the culture in the midst of which I live.  So they are loose-fitting, solid colour, practical, modest and unpretentious.  They look a bit medieval steampunk lagenlook amish zen troll or something.

I had a while right at the end of that year when I went a bit English Lady.  I got some elegant, fitted (still modest) skirts and tops from eBay, and some tights and lady shoes.  Well, that didn’t last. I found I couldn’t move easily and freely, I never felt like dancing in those clothes, and the waistbands dug into my tummy if I was gardening or doing housework.  So I sent those along sharpish.  And also at the end of that year I bought on eBay (and kept) some very pretty porcelain and silverware, because our things did all look unrelentingly rustic.

So things came in as well as going out, but more out than in as planned, so we ended up with not much stuff but what we do have, we like.

It wasn’t life-changing or anything like that.  When my first marriage fell apart I moved from a manse into a two-roomed apartment, most of the time shared with one member of the family or another, which meant keeping tight controls on the levels of belongings.  Then when I married Bernard and moved into his cottage, all I had was one cupboard and half a chest of drawers at first for my belongings, so I got rid of most of what I had.

When I married the Badger, it was two households into one, so most of my stuff went because he treasured his belongings.  Then when he and I moved into our present home, most of what we had left had to go because we’d be sharing with three other adults.

So last year’s chuckout was one of a series.  Everything I have now, I like; but I still think I have too many belongings, really.  More ought to go.

My online friend Julie Graff posted on Facebook a beautiful photo of woods in snow, the trees opening onto a wide track of untrodden white.   Across the photo was a banner with the words “The less I owned, the better I felt”.  I made it my computer desktop picture, because that expresses just how I feel. 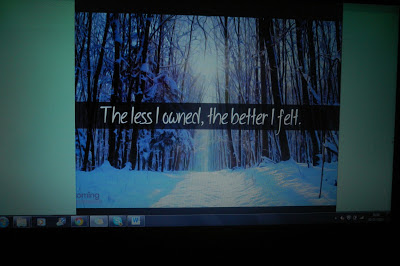 I am made such that I am easily overwhelmed, and too many stimuli – whether events, people, ideas, suggestions, complexity of surroundings or belongings – makes my nervous system crash so that I become confused and unable to think.  Though I love the things I have – my woolly red dress, the dark brown blanket on my bed, the remaining music in my CD collection, my books – I am open to parting with whatever I can prise off my soul, because the idea of it sticks to me like pitch and clogs up the works of my mind.  The less I own, the better I feel; and I like the peace of a home with very little in it, and the freedom of being able to pack up and move on at any moment’s notice.  We are only sojourners. 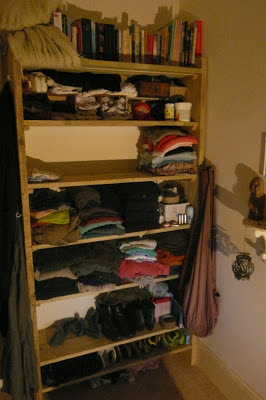 SHELF CONTENTS
Books on top
Underwear next down
Large handy space, tops and skirts.
Scarves, tunics, jackets, sock box and a few toiletries.
Winter fleeces, fleece gilets, nightwear and a couple of dresses.
Handy space (with some socks lying about in it), boots and stationery box
Shoes
Laundry

Then these little shelves by my bed have a few books and writing paper and whatnot. 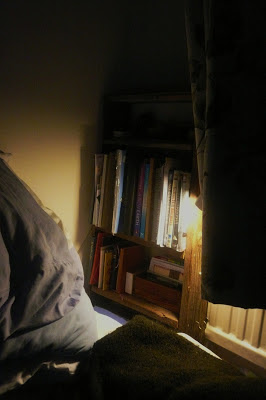 In the Big House I have  some china and my outdoor cooking things, one or two paintings.   In the attic I have the Quarantine Box that Maria suggested - the items waiting to go or still awaiting a final decision.  That's all.

I agree, I feel better cleaning out our belongings. I had a bag of trash and still a closet full of things to donate...it just keeps piling up lol! I love the quarantine box, great idea!

Only sojourners. I love that, Pen. I try to keep it in mind at all times, so thank you for reminding me.

I'm "between-times" right now. For the most part, I've kept only what is needed for the running of THIS household, almost all of which will not be required for the next one. Another great dispossession will be in order.

Hiya Julie G - yes I love the idea of steadily continuing the downsizing until there is just a bagful left. Not sure how feasible that is, but I'd like to keep moving in that direction! Like Peace Pilgrim. x

Oh Ember...I still have a quarantined box also :) I will not go through it until Spring!

I have to remind myself, that this is not my ultimate home... :)

Hi Maria - yes, that was such a good idea! xx

Thanks Ember, I wasn't quite as organised as you about it, but I did follow your lead when you first posted about the project and try to keep a focus on getting rid of more stuff than I acquired last year.

It does make me feel better, less overwhelmed with stuff.

I found that just getting rid of all the small detritus that accumulates has made a big difference.

For me its not the amount of belongings so much as feeling that what I have is there because I want it, not because I just acquired it at some point and now don't know what to do with it.

Also, that I am likely to use everything, even if only infrequently.

Like your family member I am much more conscious about my possessions as I come across them, thinking 'can I let this go?'

I have found it enormously freeing getting rid of things that carried bad memories.

"enormously freeing getting rid of things that carried bad memories"

Thank you for this detailed account of what you've ended up holding on to and the thought that accompany it. I am so moved and so pleased. And inspired.

:0) I have way too many garments still, but am going cautiously because I don't want to keep swapping things trying to get it right. All my clothes work for me now - I just have too many of them! x