Another facet of setting your house in order 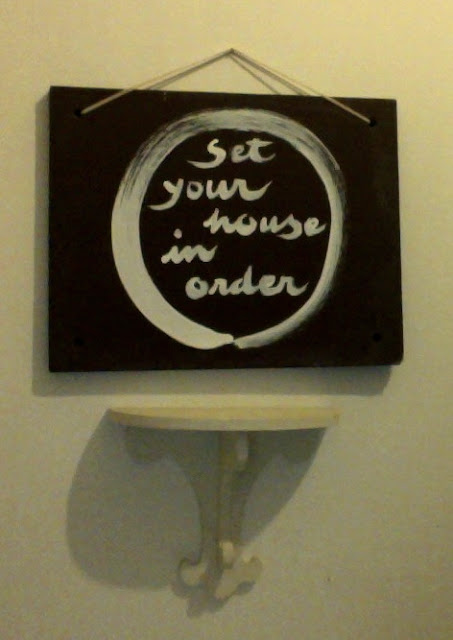 It’s the week of prayer for Christian unity, and I think in church this Sunday we might expect to hear sermons urging us to bury our differences and unite as one family in Christ.

I have a problem with burying our differences.

It’s something I’ve now been urged to do several times in my life. When someone has done me an injustice, then later wants to pick up the relationship and proceed as if nothing had happened, let a friendship begin or resume, I’ve been encouraged (by the irenic spirit who travels through life at my side) to forget the past and embrace the nascent signs of positivity. But I won’t. I won’t build the walls of the house on top of a dodgy and inherently fragile – even fractured – foundation. We get the foundation right first, them we build, is my approach.

I have had the opportunity to work as a free-church minister alongside Church of England clergy, so have stood in a position to perceive their insistence on securing and maintaining a position of advantage – even monopoly and supremacy. I have observed as the Church of England secured and defended (in prisons, hospitals, hospices, colleges etc) paid chaplaincy posts, insisting that these pass on through a C of E dynasty. The free-church ministers could participate in the chaplaincy teams, yes – as volunteers. Chaplaincies often pay better rates than parish ministry.

Where I live, it was once the custom that when someone died and had no especial church affiliation, but their next of kin requested a Christian funeral, the selection of officiant was left to the funeral director chosen by the family. In the early noughties, the C of E woke up to the reality that here was an area of monopoly they had neglected. So they – with no consultation except among themselves – informed the crematorium staff, and the various funeral directors in the neighbourhood, that in future there would be a rota of C of E clergy attached to the crematorium. In case of someone dying with no particular religious affiliation, it would now be the duty of the crematorium or funeral director to select and officiant from the rota of C of E clergy. This, in my view, is more than inappropriate – it is profoundly unjust.

I have the same problem about burying our differences as I have about digging in the weeds when preparing a vegetable patch. If you dig them out – take the trouble to root out all the weeds, your veggies grow in a clean patch. If you dig them in, you get veggies but also a forest of weeds all watered and fed by the care you give the patch as a whole.

So I am not in favour of burying our differences. To do so always tips the balance in favour of the greedy and unjust. It’s like a parent who intervenes in an argument between to children, when one has taken the other’s sweets or toys, and is interested only in that there is a fight, not why there is a fight.

I am always, without exception, willing to try and understand the point of view of people who have something against me, and I am always willing to settle our differences. But I will not bury them. They might not be dead.

today, women across the US and around the world will be marching to protest what we see as an attempt to silence voices of dissent, keep women and minorities 'in their place', curtail human rights, ignore the desperate plight of the poor and deny climate change. there are differences that need to be expressed, not buried. when we are silent, we are complicit. thank you, pen, for always speaking your truth!

I have been thinking about the women's march, turning it over in my mind, somewhat puzzled about it as its objectives are unclear to me. In the end today, I decided it is in many ways akin to the Occupy movement - an assertion of faith in a way of doing things differently. Like Samuel Rayan's candle light that is a protest at midnight, saying to the darkness, "I beg to disagree".

I'm going to Rwanda soon so the topic of reconciliation has been very much on my mind. As I understand it there is an official policy to remember and forgive. I have doubts how secure peace gained on those grounds can really be.

I fail to see how the church can have unity when someone must always compromise. I can live & let live & accept that part of the body believes & worships differently to how I do without feeling the need to violate my conscience by participating in things I disagree with. The problem with the unity movement is it refuses to acknowledge those differences, let alone deal with them.

I would agree that sweeping things under the carpet is not the way to go. It erodes trust for one thing. How do you trust someone who has never acknowledged their wrongdoing & repented? Not the same as forgiving them.

I have huge problems with this whole concept ~ though probably not for the same reasons as you. ☺

"Not the same as forgiving them" - yes, I agree.

If someone has done me wrong, I know I must forgive them. Forgiveness, I find, happens in waves or layers - I think I'm done, then there's more to do. But even when the forgiveness is at least well in progress, I don't necessarily couple it together with continuing association with the person who did me wrong.

If they did wrong, and see it, and understand the effect it had, and are genuinely sorry, then we have a basis for continuing. If they insult me and stonewall me after they did me wrong - then expect me to hop to it and carry on as if nothing occurred when their mood changes - well, that isn't going to happen. I work on forgiving what needs forgiving, understanding what needs understanding, and I put a firebreak of time and space between them and me. "No fight, no blame" as the Tao says - but no socialising either.

About unity in the church - well, Jesus prayed for it so we must work for it. But there are bound to be varieties of expression, and I think the church is all the richer for that. I'd be sad if they all merged and we had only one expression of the faith.

Spot on Pen. I could say more but I am trying to stay out of all the debates where the 'other side' is simply not listening and/or doesn't care. I have had to unfollow certain sites because the dissonnance between what they say and what they do is too great.

The latest effort by the C of E bishops has left me almost in despair. I cannot be part of it as that would imply I think their point of view is valid.

I am glad there are people like yourself who have the gifts to express what I can't.

The C of E bishops on sexuality - well, this is the sharp edge of what it means to solidify into an institution. Faith becomes impacted doctrine. You get spiritual constipation, so bad that people die of it. Institutionalism is inherently sluggish and cold.

Hey! I learned a new word today: irenic. Funnily enough, it relates to my middle name: Eiren, from eirene.

In my opinion, the church got off the rails early on and now is rife with division. I'll refrain from listing the areas and ways this happened--and just say that as things go along "faith" becomes calcified in certain tracks--not all of which are reflective of spirit, but of flesh. All denominations can point to scriptures as backing for their particular "beliefs" but few can point to the unity of scripture. The Word isn't divided, but The Word incarnate came to bring to bring division: the sacred from the profane, the common from the set-apart, the holy from the unholy.

We have to understand that we are living in captivity. The one thing that was on the lips of the dying Savior--that prayer for unity among the brethren--is haSatan's key strategic device. When we get all focused and despairing of "unity" it gets us off target to the essential mission: that of making disciples. Our unity lives in Messiah and he'll bring it with Him when He comes.