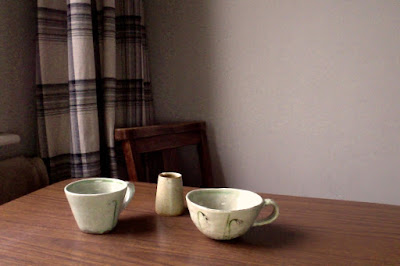 There were four minimalists, all good friends, who liked to meet up so they could encourage one another in the way of simplicity.

They all valued hospitality as beautiful and precious, so they took it in turns to meet in each other’s homes.

The first minimalist lived in the house where he was born. He had inherited it from his parents. Nothing in it had been updated since the 1940s, and he loved it just the way it was. Though the furniture and fittings had grown old and shabby, he kept everything beautifully clean. He had quite a bit of memorabilia – photos of his parents’ wedding and his childhood years, a rack of pipes his father used to smoke, the piano his mother loved to play, and the tea set that had been her pride and joy. He was satisfied with everything he had, and never bought anything new. When his friends came round, he would make tea in a teapot, boiling the water in the battered stovetop kettle on the old gas stove, and using loose tea leaves. He regarded teabags as somewhat wasteful and unnecessary. Afterwards he tipped the dregs onto the rosebed in the garden.

The second minimalist lived in a small rented flat above a shop. He had no car, so it was important to him to stay near the town centre where he could easily access all amenities on foot. Home ownership contravened his principles. He wanted to pass through life as untrammelled by possessions as possible. The flat came furnished with a bed and wardrobe, kitchen appliances, and a three piece suite and coffee table. Not all of it was to his taste, but he reminded himself to be satisfied with whatever had been provided. When his friends came round, he put £1 in the meter and boiled water in an electric kettle and made tea in cheery mugs he’d bought from the charity shop – a teabag in each mug, milk poured as it came from the carton in the fridge. He would never have used loose tea, because he would not have liked the unnecessary clutter and expense of a teapot and teastrainer. He kept the teabags to re-use later, and composted them in the wormery he kept under the coffee table.

The third minimalist lived in an off-grid cob house in the middle of a field out in the country. He had made all his own furniture, upcycling old floorboards and scaffold boards, broken chairs and surplus drawers. When his turn came to offer hospitality, he hitched the pony up to the lovingly restored governess cart and went round to collect his friends. They would arrive to find the kettle singing on the home-made rocket stove, and sit in his cosy living room while he gathered herbs from the garden to brew tea in a large and beautiful ceramic teapot made by the potter who lived next door. Afterwards he poured off the dregs as plant feed onto his indoor tomatoes before tossing the leaves onto his permaculture system veggie beds. He took his friends home well before dark, as a pony and trap can be vulnerable on the roads after dusk, even with a solar lantern hung fore and aft.

The fourth minimalist lived in a shed in his aunt’s garden. He served his friends water from the outside tap, in well-washed yoghourt pots. They sat on the floor except the one with arthritic knees, for whom they dragged in a large log for an improvised seat, with the addition of a folded sweater as a cushion. Here they chatted until twilight, when they all went their separate ways because their host needed to go dumpster diving.

They learned a great deal from each other, and their mutual friendship greatly enriched their lives. What, after all, would we be without the people we respect, whose values we admire, and whose company is dear to us?

This gave me a BIG smile, especially reading of the wormery under the coffee table!! I like that there are many roads to the same destination. May you, and all of us, have a very good year!

love this and, like judy, made me laugh. there's more than one way to be a minimalist. i hope we'll hear more about these four friends in the future. they sound like great fun to hang out with :)

The wormery under the table made me chuckle too. I would also like to see these four written about more! Do you think minimalists can be friends with maximalists who are minimalists at heart? Rhetorical question. :) xoxo

Honest truth? I think minimalists walk such small and hidden tracks they are hard to find, let alone befriend. The maximalist would have to know where to look! But I believe they are friendly enough. xx

This is why I don't think the word minimalist works for me. I try to live a simple life, rather than a minimal one...I'm not sure I've figured out what it means totally, especially as I live with my husband who loves his stuff!

Minimalist No.1. seems absorbed in the past, perhaps an overly sentimental attachment there?
No. 2. in the sterile surroundings .. I would probably suggest a snack in the park as more convivial surroundings.

No. 3. Could be a lovely creative person in interesting surrounds.
No. 4? The conversation better make it worth it. Mairin.

Hi Mairin - I wonder if the four minimalists had been women things would have looked different?

now that's an interesting question, pen. if those minimalist had been women, it probably would look a bit different but how exactly? i agree with jen's comment. my life is one of simplicity but certainly not minimalist. minimalism seems to have an association with a certain sterility that i don't find appealing. like jen i live with my husband who has plenty of stuff himself but we keep separate areas as our 'hermitages' so we don't annoy each other :)

Ha! I think that must be what they call "intelligent marriage"! x

I love this. I found it quite moving. It made me think about being able to be friends with people who don't believe the same way I do. About us celebrating what we have in common despite being on a different place in our journey or maybe on a different road altogether.

I think it would be Lovely to have tea with any of those folks...

I love that story. It is true there are many ways to be a minimalist, none of them are wrong.

I started de cluttering about 3 years ago - never imagining just how big a job it was. Starting in the loft and working my way through the house.

I find myself confused. I found the de cluttering process hard going but cathartic, as if I had streamlined my whole body by getting rid of unwanted 'noise' in the house. But now, as I come to the end of the journey I am starting to feel that I need to do something to make it reflect back our personality, which is something of my new resolution. Perversely, there is a part of my that longs to have Molly Weasley's house!!!!

Oh, I know just what you mean! There's such a thing as friendly clutter. Some of the pictures I've seen proudly posted of people's Konmari-ed interiors look as if they've moved out. I hardly dare suggest this but I bet no one else will: perhaps you need a smaller house now? The Badger and I have got rid of masses of stuff, but our place certainly looks fully furnished because it's so tiny! I'll post some pics in a week or two, following up this comment of yours, because I think it's a really good point and applies to lots of people. x

you are quite right you know. We have a very large house - when once we were a family of five with busy kids, and animals. Now eldest son, has moved away. Youngest son is a teenager and lives in his own room, and our daughter likewise. The large lounge, music room and family kitchen now echo with the noise of a family that doesn't exist anymore - as my husband and I sit in opposite corners to try and fill the void. Very astute you are me thinks. :)

I'll await your future plans with interest and excitement!