The one and only sales conference I've been invited to attend as a writer was for the very first book I wrote, my novel The Hawk and the Dove.

I didn't know anyone at the publishing house, so I arrived to a room filling up with strangers taking their seats round a big table.

Somebody said to me, "This is Tony Collins," and I turned my head to look into eyes full of kindness and sparkle. I immediately loved this man, my editor.

That was at the end of 1989 — exactly thirty years ago. So began a deeply satisfying professional partnership, from which friendship also grew.

I have loved and admired Tony's approach to his work. For one thing, he is always willing to go the second mile. In any situation where things have gone wrong or someone is struggling, his first thought, every time, is to ask, "How can I help?"
The journey of a book from initial idea to publication is often fraught with difficulties; there are many hurdles to get over. I, and his publishing colleagues, and every other writer who has been lucky enough to have Tony as their publisher, discovered that he would always have my back, always do his best, always carry more than his share of the burden. Everywhere I go with Tony, I hear the same opinion expressed — that he is a legend in the world of Christian publishing.

Tony has always taken the rare and blessed view that a book is primarily the author's work. He was clear and firm in advice and direction to ensure the book contained nothing libellous or injurious to success in the marketplace, that all permissions had been sought, that the prose was up to snuff — and his editorial suggestions were every time constructive, resulting in a better book. Tony asked the right questions. But he never, ever made it a vanity project, never tried to "put his own stamp" on someone else's work. His contribution was intelligent and authoritative, but also essentially humble. I have treasured that, not least because it was his input as a publisher over the last thirty years that cleared the way to publication for my writing as I wanted it to be, not turning it into some kind of dog's breakfast by regarding it as "product" or by over-intervention.

In the September of 2005, a year after my husband Bernard died, Tony told me that his marriage of nearly thirty years, to Jane, had sadly come to an end after a decade of the two of them doing their very best to hold it together — though after the deep pain of parting Tony and Jane have remained good friends, and still enjoy each other's company and conversation.

When I discovered that Tony was therefore once more unexpectedly single, it felt like finding the foot of the rainbow right there in my own back garden. Romance began, escalated swiftly, and we married each other the following September, thirteen years ago. 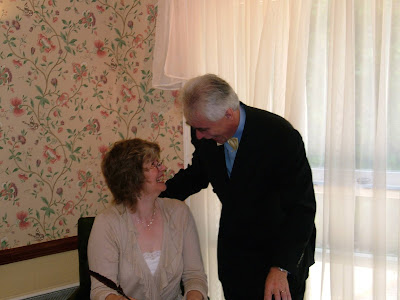 Tony semi-retired a few years back, and has been working "part-time" and mostly from home since then. "Part-time" means part-time pay. The work mysteriously expands to fill every hour God sends, just as it always did. Tony will be seventy next year, and decided this last summer that the time had at last come to stop working for a publishing house. So he will be retiring from his job at SPCK — which he has immensely enjoyed.

Tony still has more plans than most people would think it practical to try cramming into one life. His book Taking My God For A Walk, about his pilgrimage along the Camino de Santiago, was published in 2016, by Monarch books — the imprint Tony started and took with him to Lion Hudson. 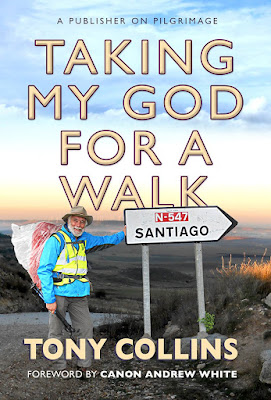 "Monarch", incidentally, is not monarch as in "superior being lording it over everyone else", but as in the epic-traveller Monarch butterfly. Readers love this book, and Tony's plans for 2020 include working on another book he's had in mind for some time.

He will also continue his lifelong work of looking for new authors, or new books from established authors, to help birth new work about the Gospel into the world.

Just today, an email came in from his friend Roger Chouler, a colleague from Tony's Lion Hudson days, one of the cover designers.

"I thought a visual would sum up my enduring thankful and appreciative thoughts of years spent working in the field with you. I always admired the way you handled people, situations and could always find a way through when things became testy.
You always encouraged me, even when a cover, graphic or design needed to be revisited, and were the first to commend the final result. You never laid blame on anyone. A true man of grace.
I hope this visual tribute brings you happy memories and sense of accomplishment. The Lord has kept His hand on you through the years." 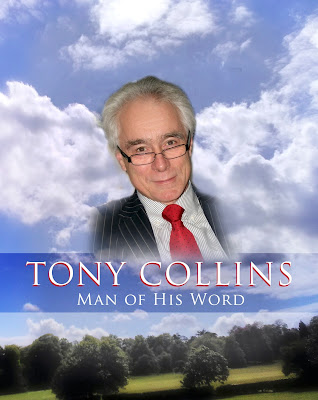 I am so proud of this man, and so very glad I've had him as my publisher through thirty years of writing. It seems entirely right that as he steps down from his editor's desk, this is the moment for me to put down my pen. Because we always worked together.

I am so glad I married him; not least because he makes me a cup of tea, first thing every single morning. Which is biblical, isn't it? You know — He-brews.
Posted by Pen Wilcock at 13:21

Aw precious words Pen and so poignant too since you truly are a writer. Here's to looking forward to reading your continued musings here on the blog. Love and prayers to you both and a blessing upon 2020 for you and your lovely family xx

Hi San — may you and your family prosper and be blessed in 2020. May God provide for all your needs and watch over your life. Peace and happiness to you. xx

Hi Anne — I'm hoping we can catch up sometime early in 2020 — I think Tony will be in touch. We had some thoughts. May you be blessed in the year ahead, may 2020 be a happy year for you. xx

I've started reading Tony's book. Very perceptive. Lots to think about. I'm going to reread your Hawk and Dove books this year. I live in Australia. You may have heard about our bushfire crisis. I am not directly under threat, but am shattered and devastated about what my fellow Australians are suffering. I am thinking about what I would do if I am in that position, and how I would cope. I am in a high risk bushfire Area, so it could happen. So I need to be more loosely attached to my possessions. So I am decluttering. It is not easy. Your books and I think Tony's book will help me to get things in perspective. Help mum e work out what I really need. What I would take if I had to evacuate. How I would cope if I lost everything.

For sure I have heard about the fires — terrifying. All of you in Australia are uppermost in my mind and constantly in my prayers just now. God bless and protect you, and keep you safe. I love your idea to turn this to good in your own life by simplifying and streamlining — I think this is going to be a vital approach for us all.

Such warmth, love and respect in this post, Pen, echoed by those of us fortunate enough to have worked with Tony. I owe him much - everything when it comes to my books. However, you also have had a large part to play, so I thank you for the advice and encouragement you have offered over the years and for the books that continue to inspire. X

Hello, Claire! Waving! May 2020 be a good year for your writing, your home, your family and you — body and soul. x

How have I missed this most beautiful unionw wth all its connectivity? Congratulations to Tony. May you two have many more years of mutual respect and productivity.

I absolutely loved Tony's book. I have friends who I just learned yesterday are going to walk the Camino later this year, and I will recommend it to them. xoxo

Hurrah! I think they will find it a wonderful experience. Tony's writing another book now he has stopped his full-time employment. It's going to be grrrreat! xx