In the Easter vigil, the act of worship held to bear witness to the moment of Christ’s rising from the dead, the paschal candle is lit in the darkness, and from it the flame is passed from one worshipper to another, each lighting a candle from their neighbour’s until the whole church is shining.

In John’s gospel, the prologue introduces Jesus as Light coming into a dark world where, though it is not understood and is met with hostility, even so He is “the true Light, which enlightens everyone that comes into the world” (v.9) and “as many as received him, to them he gave power to become the children of God, even to those that believe on his name”.

The prologue to a gospel is the place where the writer sets out his stall as it were – as in the overture of an opera we discover glimpses of the themes and melodies that will unfold more comprehensively as the work progresses.
John’s gospel depicts Jesus as Light moving through the dark world, allowing us to see the way, illuminating the hearts and minds of those who welcome Him.

And John presents Jesus to us as the cosmic Christ, through whom all creation came to be. He describes him as the Only Son. He is referencing a figure of Greek philosophy, the Monad, represented graphically as a dot in the middle of a circle — the first being, who emanates from God, and from whom all life proceeds.

The crucifixion is described in this particular gospel in terms of glory — “Father, the hour has come, glorify your Son” John 17:1 — so that the moment of self-offering in sacrificial death is the great blaze of light, the hour of glory when the work of the cosmic Christ depicted in the prologue is consummated and fulfilled.

Each of the gospel writers is working in a church context, and understanding the context is helpful in perceiving the thrust and slant of the thematic content of that gospel.

John is writing for a church bearing severe persecution at a time when the expected imminent return of the Christ seems dismayingly delayed.
A question (not the only question, but a question) his gospel is answering is an urgent “Where is Jesus?”

Thus John’s gospel in telling the story of Jesus brings out the searching of discipleship.

In each of the gospels, the first words that Jesus speaks as He enters the drama offer a clue to the themes of that particular gospel.  In John’s gospel, Christ’s first words are ‘What are you looking for? . . . Come  .  .  . and see.”  Christ encourages the search, beckons us on further and deeper, calls us to keep looking.

John shows us that the light to our search is Christ Himself, drawing us through the darkness to union with Him, to the state of faith in which we are completely one with Him (see His prayer in John 17) and with the Father.
The task of the gospel writer is not the same as that of a journalist telling the story of a famous man; the gospels are written for discipling the flock of Christ, teaching the household of faith.   John’s gospel is teaching a weary and embattled flock how to find Christ now; where Jesus is to be found.
What he does is to show how the real presence of Christ has transferred from the man Jesus of Nazareth into the body of believers – that is to say the risen Jesus is still really and fully with us, but the locus of encounter is no longer in an individual only, but diffused into the laos – the people of God (what we anglicise as "the laity").

He tells the story of the risen Jesus appearing to the disciples the day Thomas was not with them, “the first day of the week” – and then shows us the same group a week later, this time with Thomas present, encountering for real, for himself, in person, the living presence of Jesus.  This incident helps the believers (then and now) to grasp with powerful immediacy how it is that as the faithful meet together week by week, Christ can be encountered really and immediately in the midst.  The Light of the World known in the hands and feet and smile and touch and laugh of the man Jesus, has now passed into the whole Body of Christ.

There’s an interesting detail that we are inclined to miss in translation, in the story Grace read us from John 20, of Peter and the disciple Jesus loved, running to the tomb on the resurrection morning.  The word see — or rather the past tense, saw, is used three times.

The beloved disciple got to the sepulchre first, and stooped down to look in. John says he saw the linen cloths lying there. Then Peter, coming up behind him, went right in to the sepulchre, and saw the linen cloths that had been used to wrap Jesus’s body and, a little apart from them, the cloth in which his head had been wrapped. Then the beloved disciple followed Peter in, and he saw and believed.

My daughter Alice made two etchings portraying the inner truth that John, with his preoccupation with light, was conveying to us in telling us about this happening. 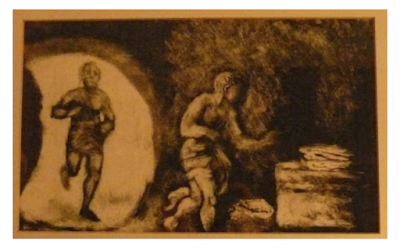 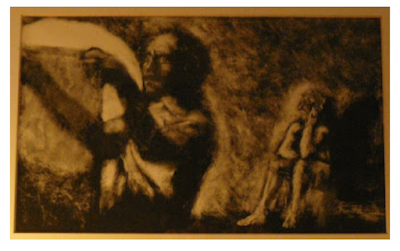 John is showing us how the Light continues to move and illuminate and transform.

In the first one, the light is outside, behind the disciples, and the place they are coming into is dark.  The way they walked with Jesus, behind them now, was illuminated by his presence.  This death has clouded their understanding.  But look at the picture.  Light is waiting for them in the depths of the tomb, like a promise: the grave cloths are SHINING.

The in the second picture we see Peter holding up the cloth, mystified.  Alice expresses the moment in the way she shows the cloth partly obscuring the light and partly allowing it to shine through.  Peter is searching for meaning there, but hasn’t quite got it yet.

But in that second picture, look at the other disciple, who has “seen” (understood): he himself is shining now, as he looks back towards the light of the way they have come.  The Light has passed into him, is incorporated with him.

This is the message of John, the promise of Light that can shine within us, “While you have light, believe in the light, that you may be the children of light” (John 12:36); “the true Light, which enlightens every man”.

This is, to me, what underlies my sense of call to travelling light — to pass through the world in simplicity, not weighed down by an accumulation of money, possessions or commitments. I feel a sense of call to be — not in any specific thing I do, but just in who I am — something like a lantern; simple, transparent, one-purposed, upheld for the single purpose of showing the way.

The light that came to earth in Jesus has illumined every soul willing to receive it. You, too are here to bear the light, to show the way, to bring hope and peace and healing by the light that shines out of you.

I will need to read this when mum is asleep. I need to concentrate but I do so appreciate the message. I personally feel Easter is the high point of our church year. Christmas is beautiful but Easter is so special. The first time I participated in a new fire service I was overwhelmed. The light in the little old stone church spread so quickly. The message really was driven home.