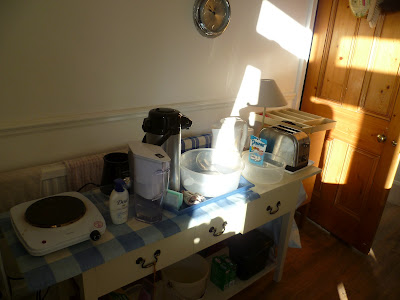 Hey, that's impressive.  Even since that photo was taken we Freecycled the filter jug and the clock!  And used up the hand-soap and stopped buying it in plastic bottles like that, transferring to unpackaged natural soap from the wholefood co-op.  And can you see that small pale green oblong next to the filter jug?  That's a nylon scouring pad, not biodegradable and we used to get through quite a lot of them in fairly short order.  We scour with bicarbonate of soda instead now, with better results.
Anyway, welcome to the madhouse with its usual ailments and muddle.  Buzz’s iritis has been flaring up badly, the Wretched Wretch has a broken arm and the Badger has gout in his knee, not to mention a rattling cough.
Kitchenman, having taken the entire week to paint and fit 2 kitchen units (he was delayed, yes my friends, by cutting the worktop too short), promised faithfully to paint diligently in his caravan all yesterday (Friday), then spend the weekend fitting units in our kitchen.  Have we seen him?  Have we heck!
However, his presence in our home was not without impact.  When I came to put the old juicer on Freecycle I found to my surprise that the plug had been cut off.  Turned out Kitchenman didn’t want to spoil the nice units he’d made with the intrusion of a hole cut to pass through the plug for the washing machine so we can actually plug it in.  Since washing machines come with a sealed join uniting flex and plug, he couldn’t take it off.  No problem.  He simply cut it off.  And sourced a replacement from the juicer I'd earmarked for Freecycle.
Sigh.
Oh, and I had a letter from the Inland Revenue (God bless ‘em) during the week.  A pretty red letter, signed by Nobody, covered with Final Demands, threatening to send in the bailiffs, levy a penalty fine, charge interest on the amount outstanding, and demanding £2.5k this living instant.  Well, that would be entirely reasonable if I hadn’t paid them promptly on receipt of their initial demand 2 months ago.  I did try to phone them but there was nobody home to answer any of the three numbers I tried – no sir, not even when I waited 45 minutes listening to tuneless electronic “music”.
Anything else to tell you?
Well, the new issue of Resurgence has a beautiful cover, but I’m scared to open it and read it.  Abattoirs . . . factory farms . . .  How the term “inhumanity” came to be coined I shall never understand, I should think “humanity” covered it pretty well.
However, spring is here in Sussex – the kind of light misting rain that is exactly what the new grass seed on our ploughed up garden needs.  For the first time this year a couple of mornings back it was warm enough to have the window open and listen to the birds sing in the new day.  And I am reading a jolly good book called Countryside & Cloister written by Sister Marie Therese of Thicket Priory Carmelite Monastery in Thorganby.    And I enjoyed watching Goodnight Mr Tom (good film, even better book) on the telly this evening, even if the film-makers' idea of “Yorkshire” does not coincide with mine.
And today the Wretched Wretch came to play with his mother.  I walked along the Tricycle Route (back roads and alleyways) to meet them.  Even before I saw them I knew who was coming round the corner by the fierce growling and roaring of an approaching wolf intermittently insisting "Mummy!  Be a pig!"
So we sat by the fire and ate orange cake and did jigsaw puzzles and drank tea as if we were the happiest people on Earth which, notwithstanding Kitchenman, gout and the Inland Revenue, I think we probably are.
God bless you and keep you sane and healthy; try to be good.
xxx
from me
-----------------------------------------------------
365 366 Day 56 (if you don’t know what I’m talking about, see here) 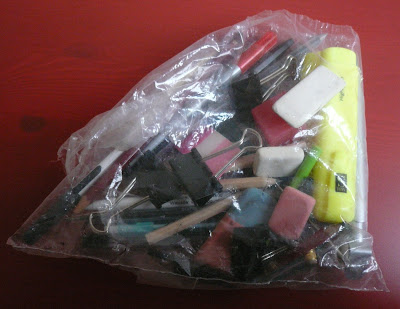 Oh, glory, was I glad to be rid of this!  I’ve toted this bag of accumulated stationary items with me through 4 house moves!  Can you believe, someone actually wanted it!  It went with one of my “Keep the kids busy in their school vacation” kits on Freecycle.  And the recipient was actually – get this – PLEASED!  We’re all different, aren’t we?
Posted by Pen Wilcock at 21:19

Loved Goodnight, Mister Tom [the book, haven't seen the movie; didn't know there was one]. We have rain too ~ not light & mizzling. Heavy. Torrential. Floodable.

Good things come from some of the flooding. The Inland Sea is back ~ which gives the best cattle grazing in the world so the farmers are happy. ☺

Sane and healthy, thank you. Yes, I am managing to do both. xx

Ganeida, I am *so glad* somebody can rejoice in all that rain!

Mercy!
Still...it's all about being happy amidst the muck isn't it? Otherwise when would we get a chance to be happy?

I just recieved a lovely package from over The Big Pond. Prettiest flowered apron I've ever seen and I am delighted! Thank you so, so much. It is long on me, but as I'm only 5'4" I've had lots of practice shortening things.
The darling purse is a sweet surprise, I've never seen one with two sets of clasps, the "secret" inner compartment is clever. The Manimal says it's eelskin, which is something I've never seen before, we don't get a lot of eels here in the American Midwest. Not enough oceans here I suppose.
Thank you, Thank you, Thank you!
L.

;0) And your Manimal is quite right!

the thing is that one woman's rubbish is another womaan's treasure! love it!

2nd word down here is emberri!

One person's rubbish is another person's treasure...

The Wretched Wretch has a book of parables retold for small children, which he likes very much. We were reading the parable of the Pearl of Great Price, and I was trying to imagine how anyone could possibly care enough for a pearl to sell everything for it.

I mean, I understand what Jesus was saying, it's just that a pearl so doesn't do it for me. I've always been the sort of person to bypass the real stuff in favour of the costume jewellery. I'm trying to think if there is any object I could put in that story that would be a good match for me. Maybe some kind of book. But my treasure would be days free of obligation and anxiety.

I remember thinking just the same thing, Buzz, when I was immersing myself in the story to learn the Godly Play version. In true "the answer is supposed to be Jesus" fashion I knew the Pearl was meant to represent the Kingdom of Heaven, but I knew that my personal Pearl of Great Price was our home because it safeguarded the freedom and the safety of our family, as well as a little patch of land that allowed us to live out eco-principles.
Actually the real Pearl is the family itself, because I have no trouble handing over the home to them!
For me, the Kingdom of Heaven is inseparable from my family (not identical, but inseparable), because we came here to do this lap of the journey together.