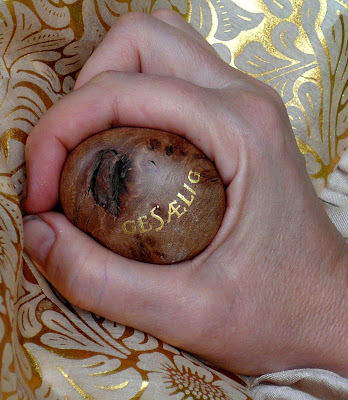 I had some wonderful birthday gifts (yesterday was my fifty-third birthday) and cards. I especially wanted to shown you this beautiful wooden pebble. Hebe, who is a calligrapher and letter-cutter has gilded onto it the word 'gesaelig'.

It's a favourite word in our household.

We first came across it when our Dutch friend Carien said our home was 'gezellig'. That's a Dutch word meaning cosy and comfortable and homely, but in a sacred space kind of way - a sanctuary, a kind of retreat. I loved to think that our home might be described like that, so I made it the name of our home: Gezellig.

Then we moved house, and our next home was Godsblessing House. We moved again, and our present house hasn't a name yet, because we haven't agreed on one.

Meanwhile the word gezellig travelled with us - and when Carien saw Godsblessing House, she said that was gezellig too. Next week she will visit the home we live in now for the first time - I'm waiting to see what she says!

Some of us in our tribe feel a sense of identity with the people who lived in England a long time ago - the Celts, the Anglo-Saxons. Their spirituality and culture speaks to us, and we have made a few vague attempts at learning Old English.

While we were doing that, we found some words that interested us especialy. One was the Old English greeting 'Waes hael' - more comfortably rendered 'Wes hal'. It means 'Be thou whole/well'. The greeting 'Hello' or 'Hallo' derives from it. The words hallowed and holy grow from the same root. The ancient songs and customs of 'Wassail' arise from this greeting which is also a blessing.

For Christmas last year, Hebe gave me a beautiful grey stone into which she had carved the words waes hael. Right now it sits on top of a cupboard in our bedroom, but once Mikey (aged fourteen months and showing every sign of being an Obelix in the making) has stopped hurling rocks, it can safely sit on the stone hearth in the living room, to bless and greet everyone who comes here.

And it was Hebe who found that gesaelig was an Old English word. The central part of the word is 'sael', which you can see at once is really the same as 'soul'. The 'ig' ending is like the German '-ich' (as in lieblich, freundlich, etc) so correlates with the modern English ending '-y' (e.g. friendly, groovy, messy). The 'ge-' beginning indicates an activity of modification, and perhaps best correlates to the modern beginning 'en-'. So gesaelig means something like 'ensouled-ish', or 'made holy'. The g at the beginning and end are not hard. The one at the beginning sounds like a 'y', and the '-ig' at the end sludges like the German '-ich' or the Dutch '-ig'. I know there are proper terms for all these things (prefix and suffix and whatnot) but I can never remember them.

By the time Old English had morphed into Middle English, the word saelig had become 'silly'; meaning 'innocent'. People of simple mind were described as 'silly' because they were seen as God's innocents, not to be held guilty of sin because they lacked the capacity for moral discernment. 'Silly' continued to alter over the years until it simply meant 'foolish', or 'of no account': but once it had meant holy and innocent. To develop from 'holy' to 'innocemt' means that for the Anglo-Saxon people, holiness had a strong flavour of purity - being unsullied. The best expression of this particular sense of purity I know is in Ben Jonson's poem The Triumph Of Charis:
Have you seen but a bright lily grow
Before rude hands have touched it?
Have you marked but the fall o' the snow
Before the soil hath smutched it?

So the word gesaelig is an adjective to describe something that has been infused with a quality of soul that is shining and innocent and bright and pure and clean, at the same time humble and lowly and ordinary. The casual presence of all of God in the world of everyday.

Can you see why I was so pleased with the gift of that beautiful pebble?
Posted by Pen Wilcock at 11:09

thankyou for this new piece of information. There's a lovely word quite similar..gemuetlich..it means so much more that cosy...it speaks of family and hospitality and frienship. Close perhaps to ..shalom.Words are wonderful things, no wonder He is called The Word.

And it rolls of the tongue so beautifully ~ for words are meant to be said aloud. I loved this ~ but I'm mad about words.

That is beautiful. So interesting about the words.