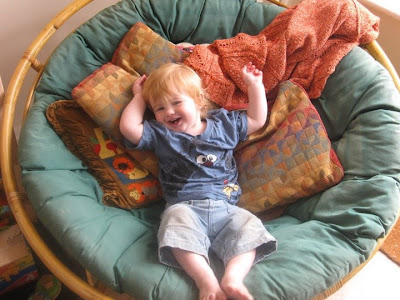 They do say that when you give birth to your first baby, your brain descends into your bottom and you never get it back. I have to admit the evidence for this observation is compelling.

I am finding a certain go-with-the-flow approach is useful in prompting my middle-aged forgettory. I can rarely remember the right words for anything, but I can usually retrieve something with the right number of syllables – the same shape and sound of word – so I go for that and it generally gets me there in the end. Or somewhere approximately near.

For instance, on the Cambridge train from London which I take to visit my mother (getting off at Audley End because she lives in Saffron Walden – aren’t English place names lovely?) coming out of London you can pick up the train at… er… now, what is it called? Something that sounds like Lavender Hole… Lavenham High… Damn… it’s on the Victoria line … er… oh, the first one past Liverpool Street… um – Aha! Tottenham Hale! D’you know I did actually have to google a tube map to track that down.

And right now the cat needs to go to the vet, just for her routine thingummies. I hate taking cats to the vet basically because they don’t want to go, but I did get as far as buying a cat-carrier. Now I’m finding excuses until it just happens to be Tony the Badger’s holiday and hoping he won’t mind taking her – it’s only at the end of our road. But my nephew is a vet, and he told me that you can get one of those drop-stuff-on-the-back-of-its-neck medications and it will fix worms as well as fleas – neat! So I want that stuff; but it can be got only on prescription, so we have to take her in to the vet. My nephew said there are two kinds and I must get one and not the other. One is called Strontium 90 or something, and the other one is called something like Firm Line or Tight Grip or Stranglehold or Tough Stand – but I can’t remember exactly what or which one it is I’m supposed to be getting. But I do remember you definitely must get one and not the other.

I thought this was all because I am growing old. I shall be 53 next week and that’s old, right? But I took heart last Sunday.

I go (now) to a very liturgical kind of church – incense and robes and signs of the cross and statues of the saints – fab! My daughter Grace usually attends chapel in the little village of Pett some miles from her home (because that’s where we all used to go), but sometimes she comes with me to St John the Evangelist which is only at the end of her road and is such a loving and welcoming church community. She came to St John’s last Sunday, bringing my grandson fully armed with snacks and Very Quiet Toys. Her best friend Donna came too, bringing her two little girls. We had a good time. When it came to the Gospel procession I abducted my grandson and took him down to the back where he could watch them process down with the golden cross shining in the morning sunlight and the candles and robes, and the thurible swinging sending the fragrant smoke curling up through the sunbeams, the red and gold book of the gospel held high by the priest with her long grey hair and her green and golden robes, everything so full of beauty and wonder and mystery.

Well my grandson (his first birthday was at the end of May) thought this was cool but then he wanted to play. I’ve not been going to St Johns all that long, so this was the first time I discovered that the Frogs have a niche tucked away in the corner behind the pillars there, with books and toys and drawing things, a statue of St Joseph with the baby Jesus, and pictures of Jesus with animals, and beanbags and child size chairs. So we went there.

This kept my grandson happy for a little while, but then he wanted to explore and headed off crawling fast towards the congregation. Uh-oh!

I headed him off at the pass and took him back to where the massive stone font is. It has its own little place up some steps, and the paschal candle is there, colourful stained glass windows and a painted roof: a lot to look at. My grandson was interested in the steps, because he is practicing, always practicing, climbing the stairs right now, and remembering ‘feet first!’ on the way down – head first is not so good on a flight of stairs, and we have managed to persuade him of this.

So we did that for a while, then Grace came over bringing her friend’s little girl, and we went back to the Frogs’ corner, which is where we were when they all returned from the Swamp. They go there taking a special children’s Bible after the first bit of the liturgy, leaving a candle burning on the altar to remind us in Big Church that though some of us may be worshipping out of sight down in the Swamp, they are still part of us.

The Frogs had not met my grandson or Donna’s little girls before, and as they looked a bit shocked to find their corner invaded, I felt introductions were in order. ‘This is Minnie,’ I said, ‘and this is Grace: and do you know, Grace is my little girl! Can you believe it?’

The Frog in question looked interested but not incredulous. So I gestured to my grandson and continued: ‘And this is –’

And do you think I could remember his name?

Fortunately Grace thought this was hilarious. Just like his mother and his aunts before him, my grandson Mikey is not the world’s most assiduous sleeper, and wakes up many times in the night for a cuddle and a feed. Grace said that the night before, after the third time she got up to feed him, she could no longer remember if he was a boy or a girl.

Email ThisBlogThis!Share to TwitterShare to FacebookShare to Pinterest
Labels: now just a minute where did I put that thing?, St Johns Pevensey Road, Where?, Who?

Wonderful post. It's nice to be part of The Sisterhood of the Forgettory. :)

Is the word Frontline? We use it on Edith and Mildred. :)

Yes. But I think Frontline is the one I'm definitely supposed not to have. But I can't remember the other one!! No doubt when we go to the vet and hear the options it will all come back to me...
And Edith and Mildred are your fosters, right?
;)

He still seems like a nice baby, even when I'm not sure who he is!