A most healthy aspect of the way of minimalism/simplicity is that it strongly encourages its pilgrims to leave failure behind.

There's a tendency, isn't there, to absorb the idea of "you've made your bed — well, now you've got to lie in it!" And that's so miserable.

However hard we think, however carefully we strategise, even when we do the very best we can, we're still going to get things wrong some of the time, aren't we? And the more inventive and adventurous and curious we are, the more we'll get wrong. If we stick to what we already know and can already do and walk only the well-trodden paths, we'll get less wrong — but how extremely boring.

Minimalism grabs that particular tree and shakes it hard. It absolutely makes you face up to the reality that if you keep the tunic with a peplum which makes you look like Nellie the elephant, and the jeans that fit you when you were thirteen, and twenty-four pairs of shoes and a selection of wide-brimmed hats in case you ever go on holiday — either there'll be no room left for anything sensible or before you know it there'll be a sliding heap of detritus taking over the floor.

The way of simplicity firmly assists you in reaching (again and again) the conclusion that, yes, this purchase was an error.

Let me offer you two examples.

The first is a little set of silicone egg poachers. 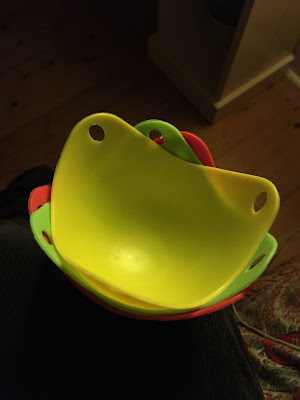 I didn't get them to poach eggs. Last year I cut the bottoms off a couple of plastic one-litre milk cartons — the ones like this — 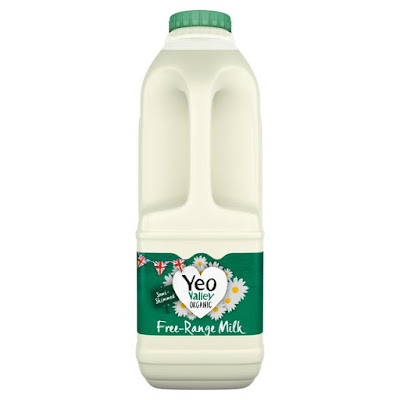 — and I made holes in the four corners with a skewer, and threaded freezer ties through to hang them from the branches of the cherry tree. As a crow can easily land on a tree branch and a seagull can't, this allowed me to successfully feed our crows in such a way that they could eat peacefully without being endlessly harassed by jealous herring gulls who had scoffed their own supper in one massive gulp.

However, that particular rig-up was a bit precarious and hard to maintain, not least because the crows thought it was fun to partially undo the freezer ties securing the thing to the branch, and I only had a wobbly chair to stand on to reach up and put them right again.

Then I thought of those silicone egg poachers you can get, with ready-made holes, and the perfect size for crow food. So I bought a set, and you know what? The crows hated them. Spurned them utterly. Would have nothing to do with them. Why? I haven't the faintest idea. I showed them, explained it to them, hung them in the easy to reach and familiar places. Nope. Nothing doing. They've been hanging up all winter.

Now, silicone is more or less indestructible, so when I took them back down out of the tree they looked as good as new. So I washed them up and poached an egg for my tea.

And then I thought — no, look, this is stupid. Because when I poach eggs I just chuck them in the boiling water and that works perfectly well. I don't need to add a silicone egg poacher that I then have to wash up, just because I bought the damn thing. Time to draw a line under it, I decided. So that's gone on its way.

And the second thing I disposed of was a book.

This book, to be precise: 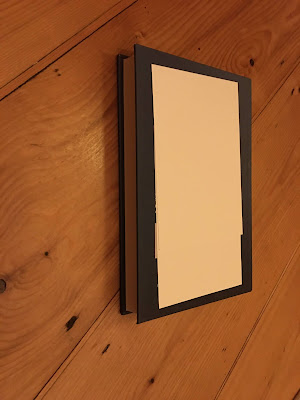 Now, I write books myself and I know how disheartening a negative review can be, so I'm not going to tell you either the title or the author. That's why I put a postcard over it, so you can't see.

But I will tell you this. What I expected to be interesting and inspiring and educational proved to be such unmitigated tosh that I wouldn't even send it to the charity shop. I thought it was going to be such a great book I even bought it in hardback — didn't wait for the e-book or the paperback to come out. So I paid (by my standards) quite a lot for it.

And this is where it went. 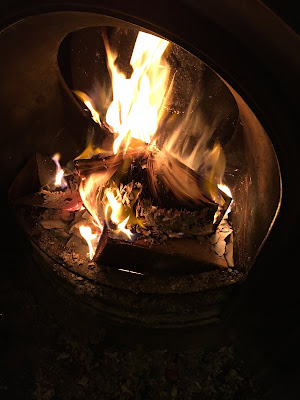 Sometimes, in life, in relationships, and in buying things, you just get it wrong.

And the way of simplicity and minimalism encourage you to accept that every now and then it will be so, and to cut loose and move on. Don't hide it in the back of the cupboard. Don't palm it off on your unsuspecting relatives. Don't pretend you'll use it when you really never will. Just get rid of it. If you don't want it, don't keep it. Leave it behind.