The challenge of today is sorting out my grandson's birthday present. He has a deep and fierce enthusiasm for transformers, and put a Dark of the Moon Megatron star-screamer on his Amazon wish list. The snag was the delivery time, which estimated a month past the actual birthday. He is a very focused person who knows exactly what he wants and is willing to wait for it (an admirable example to both his grandmothers), but even so I thought maybe I could find a version of it that might arrive quicker. And so I did, on eBay — new, but without the presentation packaging. Hmm. I consulted with his father, who thought that would be okay. So I ordered it and it came. Surprisingly, it proved more of a tussle to obtain a story he wanted by Dick King-Smith — The Fox-Busters — which I had to take two goes at ordering before I managed to wrestle it out of the ether.

So now I have the birthday loot I need to put my mind to creating satisfactory packaging. But I have a plan, that involves the box in the fridge where I keep my veggies. 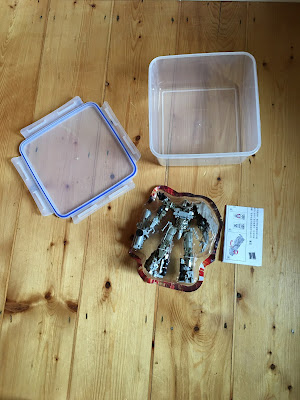 I used up the last of my sticky-backed plastic selling shoes on eBay, so I've ordered some more and when I've created a packaged gift I think looks okay, I'll show you what I did.

Somewhat to my surprise, because I am not a very loving person and because key people close to me have let me down badly and eroded my trust — I have made my inner world into something of a fortress — I find I do very much love my grandson. He is pure of heart, "an Israeli without guile", and you don't find that very often, do you?

Our family is entering Birthday Season with a vengeance now, and I have two small stashes in my cupboard waiting to be processed and dispatched to the relevant birthday persons; but in the meanwhile, regular stuff continues to leave my life.

When Tony drove across to the ex-homeless man in his new flat with the bundle of bedding yesterday, I thought he might like a pillow to go in one of his pillow-cases. I had a good one as-near-as-damn-it new, so I enrobed it in two further pillowcases and added that to his bedding mountain.

So, one pillow with two pillow-cases went out yesterday. 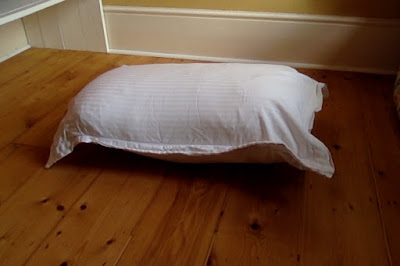 Frankly, I am slightly stunned by the amount of stuff that has been lurking completely unneeded in the nooks and crannies edging my life.