Did you ever have a go at scratchboard/scraperboard art?

There are some sophisticated and very grown-up forms of it that depend on actual artistic ability. YouTube has tutorials about how to do it (one chosen at random here). The basic idea is scratching away a dark surface to reveal a light base underneath. It's a form of engraving.

When I was a child I was occasionally given a kiddies' version of scraper-board — all you did was scratch off the entirety of a black surface to reveal a picture underneath; much like the scratchcard option of entering a lottery.

Sometimes I ask myself, why have I always been so drawn to minimalism and radical simplicity? I have things, I play with things, I try things out, I like to be resourced and also to see that everyone else has what they need and they're okay — but I never want to keep anything. I always want to move on, and I am happiest with a bare minimum. I don't want to hoard stuff; I don't even like saving money. I prefer the idea of flow, currency, a resource stream where people take what they want and pass on what they don't need and refrain from accumulation, stay free.

It occurs to me from time to time that my strong attraction to minimalism may be pathological — like bulimics feeling the need to make themselves vomit. And I accept that it may be so, and I know from observing others that the last one to know they have a problem is usually the person who has it. And part of me says, so what? It lets me live in a very small space, I pass on things others are very keen to own, I give away a lot of resources of one kind or another, I don't need very much; how can there be a problem with that?

I've asked myself occasionally what I am trying to achieve. Many people are drawn to minimalism so they can travel a lot, or retire early or save up to buy a house and start a family. I rarely go anywhere (nor want to), I am already retired, and I have raised my family.

In part, I am getting ready for the end of my life. Whenever I die (and once you're in your mid-sixties you've entered the mortality band for sure) I want to evaporate like a wraith of smoke and leave as little as possible for others to clear up and sort out.

Part of it is that the people I admire — Jesus, Gandhi, the Buddha, Lao Tsu, St Francis — all lived with very little, and it both contributed to and emanated from who and what they were/are. Somehow it is a key aspect, and I'd like to understand why. There is something beautiful in the monastic way, the way of the hermit and the sage, that I love.

And then I think it's a kind of scraper-board activity. I want to see what's underneath all the stuff on top — not the grown-up type of scraper-board where you have to make your own picture, I don't think I'm clever enough for that; the child's sort where you just patiently and carefully scratch away all the crud on top, and see a picture emerging that you knew was there but couldn't see until all the surface is taken away. I want to find out what lives underneath the patina of stuff that overlays our life. I want to see the hidden picture.

Of course it may turn out that there isn't one, that you were supposed to make your own picture, and all I'll be left with is a blank white space instead of a blank black one.

Well, for today, what's leaving my life is a large bed base. 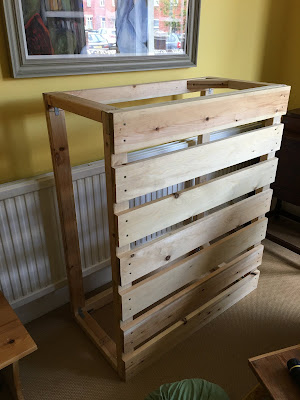 Tony made this for me. It's the same as the one he made for my room in the house, which looks like this. 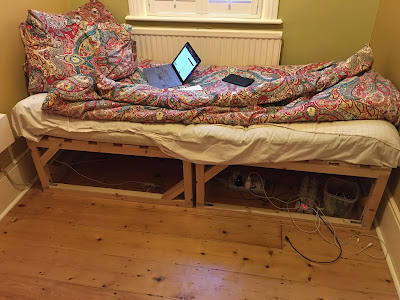 If you have been reading this blog a long time you'll know that at the bottom of our garden is a tiny house with a wood stove in it because I wanted to live in a tiny house. But when it was actually a physical reality, I found I wanted to be close to the people I live with, and I felt nervous about living in a shed at the bottom of the garden because spates of shed-burglaries are a thing even though we haven't had one in a while, and also damp created a constant problem of mildew in that space. So we keep it as a summer house and a wood store and a place to practise musical instruments and record songs, and sometimes to stay overnight. But at some point Tony made me a base for a bed there, and as none of us actually sleeps there except very occasionally (when a floor bed will do), I have come to accept the space is more useful than the bed. I felt sorry he went to all that trouble for something that wasn't used — but that is a drawback for the people who travel with me. They always urge me to "keep it this time", but I never do. That's just how I am.

That's something big, here's something small. A packet of what they call "pop-socks", nylon tights but socks. 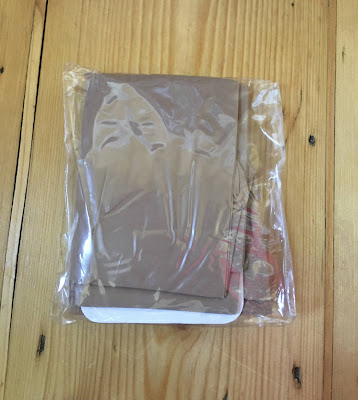 At some point I thought they'd be useful but in reality I always and only wear the socks Alice makes me. I never even opened the packet. I got them passed on by a private seller on eBay who obviously also thought they'd be useful and found it was not so. I moved them on via Freegle with a bunch of women's clothes that someone put up her hand to receive.

Thank you for today’s campfire, I joined late due to family commitments it was blessed all the same! Sending love to you xx

I can’t seem to find the campfire service anymore. I was used to just finding it on your blog, but it’s not there anymore. Any suggestions?

Hi, Charleen. Nice to meet you.

Sometimes I don't post it here — for instance, last Sunday's worship was so structured that I thought a person would really need to be in the whole meeting to get what was being said, so I chose not to post the ministry of the word for last Sunday here, as it would have been unsatisfactorily incomplete.

The Campfire Church is a Facebook group, and you can access any of our meetings (including past meetings) if you join The Campfire Church group on Facebook. To guard the privacy of what people say at the meetings (what they may share in the open intercessions for example), it remains a private group, which means you have to apply to join. You will be asked three questions about yourself, which helps me filter out inappropriate applications.

I'm not sure how long we will continue The Campfire Church. We started it as an online response to support people spiritually during the period while churches were closed here in the UK. But for the moment we are continuing to meet.