For as long as I can remember I've searched for information about people who live simply, in small places, with few possessions, to learn as much as I can from them.
Years ago before we had the internet, I used to read magazine articles about bedouins and other people with nomadic lives. I devoured Juliette de Bairacli Levy's books, most especially her wonderful account of living as a herbalist in a cottage on the New Forest during the 1950s. I read everything I could find about Romany travellers. I loved Ina May and Stephen Gaskin's accounts of their life and work as part of a sangha (faith community or ideological community) travelling across America in a caravan of school buses. I read everything I could find about St Francis and the life of Franciscan monastics. There's a book by Giei Sato about Zen monastic life — it's called Unsui, which is the Japanese word for a novice — that I read over and over. And David Whiteland's Book of Pages also taught me a lot about staying simple in a complicated world.
Then came the internet and the chance to see videos of Chinese Buddhist mountain-dwelling hermits, and Orthodox hermits and monastic communities, and about people making and living in tiny houses and reducing their possessions and travelling the world . . . So much to learn from! Wonderful.
Every now and then there comes along a book that's really exciting and helpful — like Fumio Sasaki's Goodbye Things or Marie Kondo's books The Life-Changing Magic Of Tidying, and Spark Joy, but mostly I find what I'm searching for in YouTube videos — in effect the journalling of minimalists, or a glimpse into small dwellings. For the tiny houses my hands-down favourites are Kirsten Dirksen's channel and Bryce Kingston's Living Big in a Tiny House — and I also love Tiny House Giant Journey.
Of minimalists, my favourites are Youheum at Heal Your Living, Lefie, Lia, and a recent discovery is Roland L Banks.
Then today I came across a young man in a interview on someone else's channel giving advice about how to go about minimising, that seemed sensible and useful, so I looked him up to see what else he'd got to say. I started to watch one of his videos, got a few minutes in and turned it off. I'll explain the problem I had with it.
The minimalist in question planned to travel ultra-light with just a back-pack and an absolute minimum of things — let's say about 23. He did give the exact number, but I've said a similar but different one, because it would be mean to give him such a bad review. So we're talking essentialism or extreme minimalism — the elite of the minimalist world!
But then it turns out, he has other stuff; not much, but some —warm clothes and so forth. And what's his plan? He's going to stash it at his mum's place. NOOOOOOOOO!!!!!
I think minimalism and small space living are great. I think they bring freedom and possibility and peace, and greatly maximise life's many blessings. I am wholly in favour of minimalism. But I am NOT in favour of dumping your crap on some other poor soul so you can kid yourself you haven't really got it.
As it happens, our household member who lives elsewhere has a few belongings here, but that's a different matter. For one thing, she's one of the people whose house it actually is — it's not letting me keeping her stuff here, it's her (and her sisters) letting me live here. For another thing, she tucks it away neat and tidily with a very clear awareness of making it possible for others to use the space while she's away. And for a third thing, she isn't making videos telling the world she only has 23 things when all the time she's stashing stuff in someone else's home.
It's not a numbers game, or a competition. Minimalism is highly beneficial but shouldn't come with pressure or expectation attached. There's no need to live with 23 things; have 50, have 100, have 349. Whatever. But what is important is to take responsibility for one's own stuff, life, ecological footprint, spiritual development, and one's own impact on everything and everyone else. Living minimally to make room to share living space, or to travel the world, is worth doing. Dropping off your crap with Mum so you can make videos about how little you own is less so.
I am aware, he's very young and I'm probably being rather harsh — but please, darlings, don't do that, will you? Respecting boundaries is definitely part of the minimalist way, and obliging someone else to own/store things on your behalf is not that.
Rant over.
Today, I think it's time for some more clothes to go. 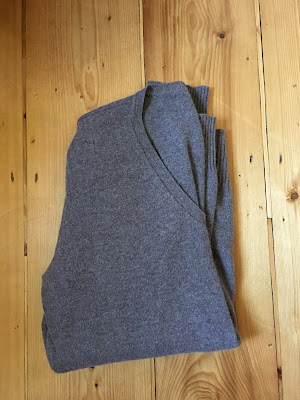 This very nice v-neck cashmere sweater, passed on to me by someone else in our family who had it passed on to her by another family member, was a good colour for me (browner than it looks in the photo), but more close-fitting than I like and I prefer crew necks or roll-necks.
And this teddy fleece I liked a lot in terms of appearance, but it was rough and scratchy, not soft, and rather confining and unyielding. It felt less like I was wearing it and more like it had imprisoned me. It was rather hard to extricate myself from it. 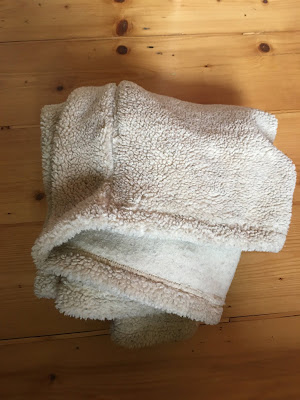 I know I said light colours don't look good on me in general, but the coloration of this particular fleece was textured — calmed down by darker colours heathered/marled/mixed in. So I very much liked the way it looked, just not the experience of wearing it.
Even so, I felt sad to see these items go — they came into a "so very nearly, but sorry, not quite" category of clothing; and I prefer the "yes, absolutely" sort.
I Freegled these.
Posted by Pen Wilcock at 08:13

A friend of mine told her two daughters when they finished uni and started work that they could each leave ONE suitcase in her home. I have one box of books [daughter #2] and one large bag of baby equipment [daughter #1] but even the babystuff is going shortly as it will be needed again soon. I remember being very annoyed when I read that the writer David Thoreau 'living simply' by Walden Pond, used to take his washing home to his mother! I like Joshua Becker's take on minimalism, it chimes with the way I am thinking about my possessions...

Ah, yes — it is precisely with minimalist solutions to things like laundry and cooking and cleaning that the details are interesting and informative — discovering the challenge is just relocated into someone else's life always feels so disappointing!

I am decluttering, for me it is mainly books and clothes and a charity is coming to my house today to pick up two bags of stuff. A beautiful way of life is L'Abri and Arche in Canada where Catholic priest Henri Nouwen lived and cared for a very handicapped (differently abled?) young man. He gave up teaching at Yale and Harvard to do this.

Ah, yes — sometimes here when they are in need of some more things for the shop, a charity will drop round a bag for us to fill if we have anything to give. They say a specific day when the van will be coming round to collect, and we leave the bag out on the step for them. They will also come and collect from us if we phone and ask them to. Handy for people on public transport.
Henri Nouwen — yes, a gentle and lovely soul.