Our daily lives in the modern world have evolved consumerist patterns — a lot of gadgetry has gathered around cooking and keeping fit, holidaying and walking, leisure time and cleaning and gardening; every different area of activity seems to have a kit to go with it. And people do derive a lot of interest and fun from using their hiking gear and their golf stuff, their fishing things and their food mixers. Only yesterday, I bought a milk-frothing jug, because I love frothy coffee. Was it a sensible purchase or just one more damn thing? At this point, I find it hard to tell; but I'll re-home it if it isn't regularly and enthusiastically used. I do buy things, but I don't often keep them.

Of course there's still a question mark over the things I do keep and enjoy. That milk-frothing jug — if I factor in the industrial process and the ecological impact and the approach to life it represents, is it still worth it? Even though I feel pleased to have it, I have to acknowledge that no, it's probably not worth all that. But if I consider returning it to the shop, I know I don't want to. It is this attitude, repeated over and over and multiplied into many different areas of life, that creates a consumer society and a ruined Earth. But I can feel my inner self clinging fiercely to that jug like Gollum, insisting that I wants it.

Sometimes, perhaps, it's better to allow the child inside oneself to be exactly that, and have the toy and let it go in due course.

We do have some machines we use constantly. We have an electric kettle (we also have a stovetop one, we use both) in our house, and a soup whizzer, and a smoothie maker for our kale shakes. Those things have such frequent use that, over the years, we have burnt out several electric kettles, smoothie makers and soup whizzers. Where are they now? At our landfill site, things to be thrown away are separated for recycling, and there's a bin for small electrical goods where we've put our kitchen gadgets with burned out motors. But what happens to them then? I suppose some components can be re-used, but others just get added to the trash mountain.

I don't even know what I think about this, at this point. My adventure into minimalism, even though it's been rolling for some years, has got as far as keeping down my stash of personal possessions and clothing, sharing living space and household equipment, giving away or selling anything surplus to requirements, and doing my best to live simply and frugally — but I have never thought about fasting from all gadgetry until this moment. It's never occurred to me that I might choose to have soup with lumps like stew, and just have steamed kale not kale shakes, and only use the stovetop kettle even though it takes so much longer, and say I can have frothy coffee only as a special treat when I go out to a café. Actually — correction — I did think of that last one but rejected the idea before it got legs and ran.

Yes, I think I could imagine a future where I might walk deeper and deeper into minimalism and gradually let all these things go. I think it would be good for me. It would have joy inside it. I'm not there yet, though. And at least, in our shared house, if one person has a soup whizzer it means that four people do (five at times). We'd all have to live somewhere. If Tony and I didn't live with Hebe and Alice, we'd in reality likely have two separate dwellings rather than three, or four — but that would immediately double some machinery, though not all. We already have two televisions because we sort of have two households within one house. We each have our own computer. We have a second freezer as an overflow (for harvest times and Christmas), in use as a kitchen counter and storage place for accumulating hospitality food the rest of the time. We have two vacuum cleaners because Alice and Hebe much prefer using one and Tony much prefers using the other. I use either of them, but both as little as possible because the sound of vacuum cleaners does my head in. But we'd be running two boilers (UK — furnace, US) and two cookers (US friends, that's what we cook our food in and on; I think you have a different term), two irons and ironing boards — we'd have to duplicate several things but some we already do.

It seems to me, in thinking aloud about it here, that we in our household have been able to limit/minimise quite a bit by sharing and making conscious choices and moving on anything we no longer use regularly — but that our life does still bear the hallmarks of unthinking consumerism, and at least I (since it's my own pilgrim path, not something to be imposed on others) would do well to think hard about further simplifying in the whole area of gadgetry.

After all, if I really lived simply — if I lived in a shed or a cave or a rented room, I wouldn't be able to have all these things, would I? There wouldn't be the space to put them or anywhere to plug them in.

Sometimes I muddle up imagined lives with my actual life — it's how I try on my thoughts — so I have to remind myself I don't in fact live in a cave or a shed. I mean, this is how I came to own a sleeping bag (one of my items to be moved on at some point this year); by forgetting that I don't in fact live in such a way as to need one.

Anyway, as agreed with myself, I made sure to swap out one comparable object when I brought the milk-frother home; but I still need to move on two of the regular things.

I specially enjoy it when I can match an item to go with someone who would really enjoy to have it, and that was the case with today's things, which are — 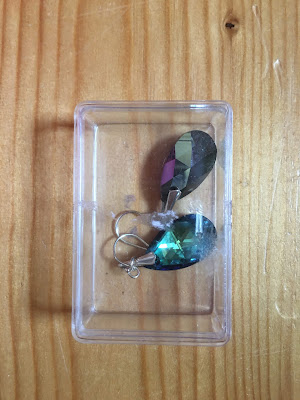 — and a very nice cashmere cardigan in a deep pine green. 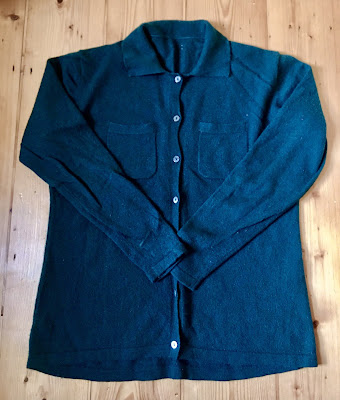 Both, in their way, very beautiful, and happily received.

The way I think about gadgetry is a bit different. I tend to think, what did they do in earlier times when they didn't have this gadgetry available, but they still wanted to do the thing I'm doing with it? What would I do if civilisation was crumbling and I couldn't obtain or maintain these items any more? You can froth up your drink with a small whisk. You can boil water with any container and a source of heat. You can smooth out soup with a sieve and finely cut veg. And so on. Most of it takes longer and is more labour intensive, so you'd have to prioritise.

As well as an excellent practical approach, that's a great adventure for the imagination!