England has some interesting place names that, with the passing of time and the development of language, have come to sound distinctly odd and in some cases acquired amusing connotations.

At various times in my life I've lived near

When my children were small, we had some pictures on the wall in our toilet (things to look at can be helpfully relaxing for people whose guts are routinely affected by stress), and among them was a newspaper headline that had caught my eye:

Perfect for a toilet, I thought.

Whatever had once defined and constrained Scratchy Bottom, there it was in the newspaper — they had released it into the wild again, let it start again and go back to what it wanted to be.

When I finish writing a blog post, I have the option to save it as "draft" or select "publish" once I'm satisfied with it. But then, after it's published I still have the option, at any time I wish, to choose "return to draft".

And, of course, if I'm in the middle of creating something but it's still incomplete — I'm not quite there with it yet — at any point if I want to I can "save as draft" and come back to it later. In fact that happened between the last paragraph and this one; you can't see it, but it did. A pop-up notification at the top right of my screen caught my eye: "Your computer will close for updates in 59 seconds." Aaagh! It's meant to update during the night and it's well morning by now — almost eight o'clock in fact. Perhaps it's on an American schedule? Who knows? Computers retain an element of mystery.

So I saved what I was writing to draft, and waited peacefully (if impatiently) for about twelve minutes until it returned to a state of natural space.

One of the things minimalism can do for you is return your life to draft.

Sometimes, people on a journey into simplicity or minimalism hit the buffers — for a while, anyway. I've watched a video with the self-styled "The Minimalists" (Joshua Fields Millburn and his friend whose name I've temporarily forgotten) where a woman wrote in asking for their advice. She said she'd done all her de-cluttering and got rid of loads of stuff, but now she'd reached her target level of belongings and achieved the minimalism she wanted, she felt empty. Why? What should she do? They might have responded by telling her it was because she'd worked so hard, and with such focus and creativity, that there was bound to be an sense of emptiness before what was new began to form. They might have spoken about how life goes in seasons, and the winters when everything has ended are always followed by the new growth of spring. They could have talked to her about how it is when someone dies — if you are their carer it absorbs you body and soul, and once the journey's complete you have this dreadful feeling of emptiness and no idea what to do with all this time you suddenly have; but then the next phase of your life re-establishes, and you begin again. They could have said any of that — but no. The friend (I've still forgotten his name) rather condescendingly told her she must have been doing it wrong; minimalism is not an end in itself, you're meant to de-clutter to make way for your exciting plans, not just because. So that was disappointing.

I think all that had happened was that she'd reached a moment when minimalism had returned her life to draft — and the wisest course of action would be not to abandon the project and re-clutter, but save it to draft — time to take a break, have a breather, come back to it later and see how to shape the new.

In her book The Art of Emptiness, Carolyn Hetzel has an interesting chapter called Time, Space, Silence and Shakespeare.

The "Shakespeare" part of this refers to the famous line from Hamlet's soliloquy, "To be or not to be? That is the question."

And Carolyn says of time, space and silence:

What they have in common is this: they are areas of potentiality, blank matrices that underlie and enable the existence of everything we perceive.

Silence allows sound. Space allows material. Time allows evolution. These are three forms of unfolding. Silence, space and time have the interesting characteristic of being and not being simultaneous[ly], whether Shakespeare likes it or not. It is the unmanifested absolute of spiritual traditions.

She makes the point that practising minimalism gives you back silence, space and time, and therefore restores potential. It returns your life to draft, your Scratchy Bottom to a state of natural space. "What will you do with your one wild life?" (Mary Oliver) becomes an unanswered question once more — which explains the sense of emptiness experienced by the woman who wrote in to "The Minimalists".

Not only does minimalism return your life to draft, it also disables the handles people have on you. In our society we are primarily defined and evaluated by our possessions — our car, house, clothes, jewellery — and by our affiliations, occupation and connections. Minimalism dismantles or hides these. A one-bag digital nomad travelling the world with 15 possessions is remarkably difficult for others to rank and grade according to category or fit into any mental schema. They are often misunderstood as a result, because the mind offers up the nearest matching pre-sets which are sometimes "free-loader" or "hobo" or "bum". I suppose this is partly why we like to signal our aspirations in a display of things we own; so that others will have a respectful and admiring estimate of our worth. I mean, loads of people have numerous books they don't read because they are drawn to the image of "intellectual". And plenty of women who wish they were young and beautiful have a collection of clothing that fit them when they were ten years younger and two sizes smaller.

Minimalism goes some way towards deleting personal history (Carlos Castaneda wrote about this in Journey to Ixtlan), or at least the outward signs of it, and that has the effect of returning your life to draft.

The absolute potential of silence, space and time, that Carolyn Hetzel observes minimalism tapping, is akin to the Zen concept of The Uncarved Block — the limitless potential that exists before someone gets to work limiting it by shape and definition, cutting away all the bits that don't look like a lion or a horse.

Minimalism differs from organising in that it restores potentiality, returns you to a state of natural space, where organising keeps all the clutter — just boxed up.

Pursuing this thought in my choice of things to give away today, I've put on Freegle (thank you for doing that for me, Tony) a set of fabric boxes for keeping things in. 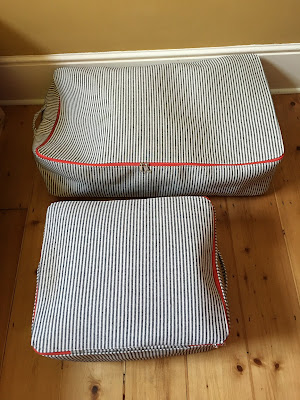 Because if the things have returned to a state of natural space, they no longer need their boxes. This may not be permanent. Anything could happen.
[Oh, look! May the 4th be with you.]

Pen, reading your posts can be rather like listening to ministry in Meeting for Worship. Often they spark many thoughts of my own; occasionally they spark a ministry in me; sometimes, like today, I feel that there might be a ministry building within me, but it never quite forms properly.

So, I have no profound thoughts today, only to tell you that we live in South Yorkshire, north of Sheffield, and never fail to be entertained when we drive through the Sheffield area called Carsick.