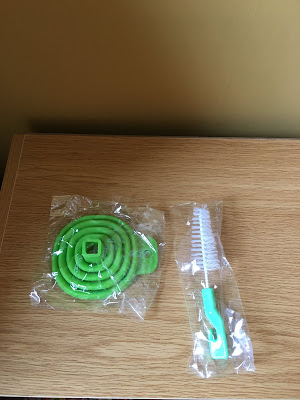 I didn't acquire them intentionally, they were just freebies additional to some other purchase I made. I think the little brush may have come with a water bottle (not sure) and I can't remember where the telescopic silicone funnel came from. Anyway, I don't need them so they've gone to the charity shop.
Posted by Pen Wilcock at 05:15

One colour. Well almost. Most days I wear a black t-shirt and skirt. Yesterday I found some reduced to $2.75. Six of them came home with me. I love having almost no choice. My skirts can be quite colourful but my shirts are always plain.

Oh, yes, That's clever! Just about any other colours go with black, don't they? So I can see that if *all* your tops are black, then *all* your bottoms can be colourful. And since with colour the issue of whether it suits your own colouring applies to tops (and then what else you wear has to go with the top), if your tops are black the colour of the bottoms can be anything. How pleasing.