Here's a video of Youheum from the Heal Your Living channel on YouTube, talking about doing her cleaning.
I like the idea of her sustainable solutions, though personally I have never got on well with the plant-fibre bristle brushes she mentions — like her, I have found they quickly go mouldy, and they are not as effective as nylon brushes. So I admit I stick to the usual plastic sort, but I do make them last for ages and ages which is all that can be said in defence of my choices.
My heart said "Yes! Yes! Yes!" to the aversion she and her cat feel for vacuum cleaner noise. I'm the same, and so is our cat, Miguel. I can't stand the noise of the vacuum cleaner. Because of a foolish early choice when we moved in here — I thought fitted carpets would be way cheaper than replacing 1970s chipboard floors with reclaimed wood; I was wrong — we do have fitted carpet in some places still, making a vacuum cleaner (almost) necessary, but Tony is willing to do that particular chore, thank heaven.
However my room and the bathrooms, the passage through from the front door, the kitchen and the studio all have hard floors, so I can sweep those and then wash them.
I see Youheum has a mop thing to wind a cloth round for cleaning floors — I don't bother with that, I find the cloth is fine and any stick or handle isn't a helpful addition.
So my cleaning kit is a rag — or disposable wipes if we happen to have any left over from some source, but I no longer buy them; or paper towel I can then use as kindling for the fire if I have some particular reason for using that rather than a rag (if Miguel threw up or something) — and then one of our two highly prized Japanese hoki brooms. 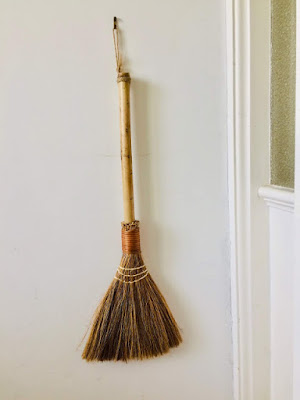 These are not especially expensive but hard to come by. Every now and then someone in Japan (or China) takes it into their head to sell some through Amazon or eBay, but not very often. If you search on "Japanese broom" on Etsy, they have a lovely selection there, including some at very affordable prices. I know this, because I've just looked — it hadn't occurred before to me to look on Etsy for brooms.
At the moment we have an accumulation of bottles of cleaning stuff to work through — Ecover multi-surface spray and orange oil for the floor and so on — but I think I might do as Youheum has, and go on to dilute vinegar and essential oils, once I've used up what we have. I'll be careful which essential oils I use, though, because (as she mentions) many are highly toxic for cats; the list is long and I can't remember them all, but eucalyptus makes cats ill, and it's one you might well choose to incorporate into house-cleaning mixtures. I wonder if you can get catnip oil? That should be okay, and smell nice. Catnip smells like incense.
I am very intrigued by Youheum's Scrubba wash bag, and have put one on my watch list on Amazon — I like the Scrubba Bag Tactical that comes in a quiet shade of brown, rather than the bright green one. A German reviewer on Amazon recommends that if you use this method of doing your laundry then you do well to also get a micro-fibre towel and use it to wrap-and-wring your laundered items to dry them off a bit before hanging out. If you do that, then hand-washing becomes as effective as machine washing but without needing to have the bulk and noise and expense of the machine. If you wash something big like a duvet, the public laundromats are a back-up.
But though I am drawn to the idea of purchasing a Scrubba bag and microfibre towel, something (well, two things actually) gives me pause. The first is that I already have microfibre clothing, and feel guilty enough about that because the fibres are getting into the water courses and turning us and our fish slowly into plastic, aren't they? The other caution is that a) I already have a perfectly good cotton towel which dries pretty quick on the line, and b) this last fifty or so years I have been hand washing things with perfectly satisfactory results, in the sink, with no Scrubba Bag. If I go away from home I a) will most likely stay in a Travelodge that has a sink just like at home, b) will probably not try to wash anything until I go home, and c) will be most unlikely ever to go camping and won't attempt any laundry while there, if I do. I strongly suspect the Scrubba Bag is, for me, a let's-all-be-like-Youheum fantasy, and to be resisted. Ditto the microfibre towel. Anyway, we have a washing machine in our shared house. Sometimes I use that, sometimes I wash my clothes by hand.
What I'm moving on today is a bundle of bedding — my spare sheets and duvet cover. 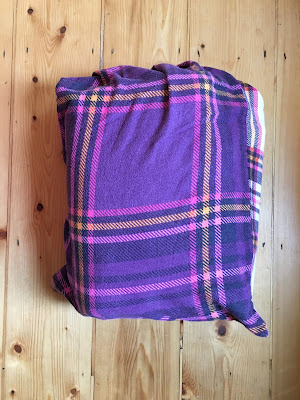 This bundle includes more than two items, but there's only one picture because they are all incorporated into one pack.
So here's another (related) picture (calligraphy by Thich Nhat Hanh). 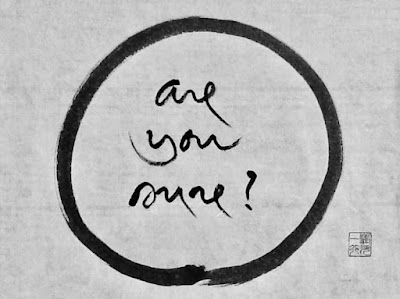 I have for some time been wanting to get rid of this bedding, but hesitated to do so because there are pros and cons.
On the plus side, it is warm and cosy, because it's made of flannelette, though there's a regular cotton flat sheet in the bundle too. On the minus side, I dislike the colour and general appearance — I usually put my Tibetan "yak" blanket over the top when that bedding is in use, so I don't have to look at it. "Yak" is in inverted commas because these blankets, though they are indeed from Tibet, are made of wool from acrylic yaks. It is possible to buy blankets made from yak wool, but if the ones you are contemplating have groovy colourful Indian patterns and cost about £22 on eBay, let me tell you now that what you will be getting in this instance is acrylic. But I digress.
The other thing is that most of what I have fits nicely into the storage space I am willing to retain, now I've moved on several sets of shelves, but only if I don't keep the spare bedding bundle — because it's bulky and takes up a significant chunk of space.
I have hesitated over this for about a year, because it means when I wash my sheets (not all that often as it happens, certainly not every week like my mother did) they need to be out on the line and back on the bed by nightfall if I have only one set. But why not? Within the span of time I'm likely to wash them, there's bound to be at least one dry, breezy day, is there not? So though I've thought about this a long time, asking myself, Are you sure?, the answer turns out to be, "Yes".
Posted by Pen Wilcock at 07:08

This is genuinely fascinating but it seems to me like it is almost a calling to live in such a way. Still, even in a lifestyle like ours where we work long hours at the moment etc, we have felt the benefits of dipping our toes into a more sustainable approach. I have always bought the cheapest laundry cleaner etc for financial reasons (although I do think fabric conditioner is a con and have never bought it) but we read last week an article by someone called "Mr Laundry" (no idea) and he said that we only need a small spoonful of detergent in each wash and it's the detergent companies who tell us we need lots. So we have bought a more sustainable detergent which is lasting ages because we use so little and it's working well. Also, I have just changed to reusable makeup remover pads and again - working well. I'm also using a Japanese wash sheet in the shower which massages as well as cleans. It is synthetic obviously but I thought it would last a very long time. However, I have to dry it on the balcony by hanging it over the clematis every morning and last week it must have blown away because I have never seen it since. Still - we carry on. Am enjoying the give-away blogging very much btw.