Taoism has a concept called The Second Mountain. The pilgrim sees a mountain in the distance that is her mountain to climb. She sets out on her journey and she does climb the mountain. On when she reaches the top can she see beyond — and realises that a second mountain stood there hidden by the first. And that's the mountain she has to climb.

But I have been thinking about The Second Mountain and also about bends in the road on one's life path — that you often can't see things of significance coming towards you because of the visibility/view where you are at the moment.

This is not always bad. Not everything coming towards us is a problem.

When I started out on this most recent wave of chucking things out, it was just with the intention of generally clearing and simplifying. I'd been unwell and I was tired, and a maxim I stick to is "if in doubt, simplify". I find things accrue and accumulate without my really noticing. I think they creep under the back door at night like slugs. So I just thought it was time to go through and have a sort-out, because every now and then I do and I hadn't had a really good go at it for a decade.

But to my surprise, as I made headway with clearing things out, I came round a blind bend in the road to something unexpected.

It's to do with what I was writing about bandwidth the other day (here). I found that once I had less in my environment, and could think more clearly, I wanted to write stories again — which had gone out of focus in trying to regain health and sort out my physical surroundings.

In going through my possessions, I got out of their box (where I'd put them away when my shelves got filled up with other stuff) the people from the stories I'd been writing. I got rid of the box, and got rid of enough things to give them a space where I could see them. 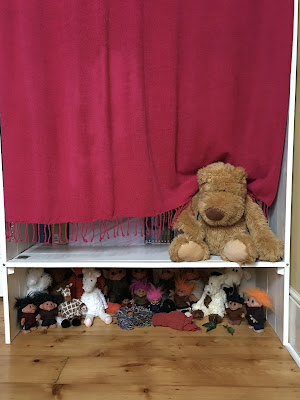 And because I could see them, I could hear what they were saying more clearly instead of just a muffled murmur coming from the box underneath my bed (there's nothing under my bed now except the thing for charging up electronics). Now I can hear them, I can see what they're doing and tell their stories again. So I'm sorting out a designated blog for them where I can keep all their stories in one place, and which I'll tell you about in due course when it's properly ready.

But it's Saturday and tomorrow is my turn for taking responsibility for our meeting for Sunday worship at The Campfire Church, so that's my focus for today. I'll make a story on Monday.

But if health challenges made Mountain One, and then led to sorting and clearing as Mountain Two, maybe writing some stories will be a Third Mountain. The bends in the road conceal many surprises.

A table. I got this because I wanted sometimes to sit at a table in the window that looks out on the greengage tree in the front garden, to eat my lunch out of the way of people cooking their lunch in the kitchen. 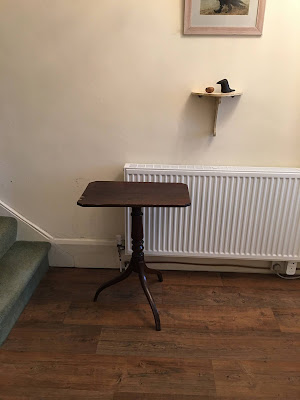 Then we borrowed a bigger table from Buzzfloyd at Christmas, to make something more festive of our Rosie (who lives alone just up the hill, so is in a government-covid-restrictions bubble with our household) coming to share Christmas lunch with us.

So the little table I'd got was no longer needed, but I just kept it (as one does). Then it occurred to me that now we have the big table I don't need the little one. It's gone to a man who restores furniture, sometimes for other people and sometimes to sell when he's made it nice. Times are hard for craftsmen like that, and a friend thought it would be helpful to make him a bit of money, so picked it up to take it to him.

The second thing to go was one of those folding shopping bags. I wanted to take the number of bags I have down to a simple set, and I prefer a shoulder bag or a rucksack for carrying shopping home. 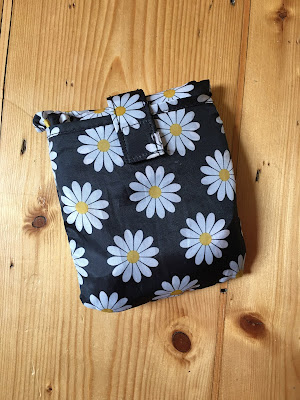 I opened up the folding shopper and put in it some of the things I'd sorted out for the charity shop. I figured they wouldn't be stuck with packaging that way..