Once we have paid attention to responsible disposal of unwanted items we're moving on, doing what we can to keep it in useful circulation and out of landfill (unless a hoarding problem makes radical measures helpful), and not burdening friends and relatives with unsought heirlooms, we still have options to consider.

The principal question is whether to sell our stuff or give it away.

How we answer this depends on our personal situation and our reason for moving stuff on.

Many people writing online have down-sized for financial reasons — perhaps they are moving into a tiny house to reduce accommodation costs with a goal of becoming debt-free, for instance. For somebody like that, it would most likely make sense to sell as much as possible, recouping a proportion of financial outlay to address debts.

Some people de-clutter to give their nerves a break from stress; they feel an urgent need for peace and simplicity. For someone in that category, donating might be better than selling, as selling adds a whole extra step to the process (a not uncomplicated one).

So how you might go about this (if you want to) will depend very much on your personal circumstances — what's absolutely right for one person might be wrong for another. Therefore what I'm about to say about selling/donating really applies only to me and might not carry over to your life.

I first got into the whole concept of walking a simple, humble and lowly path of voluntary poverty when I was fifteen and discovered Francis of Assisi. I explored further into it by seeking out and walking alongside monastics and others living in intentional community.

When I got married and had a children, what I'd learned from monastics transposed brilliantly to family life, because I understood the power of owning as little as possible and sharing as much as possible, and also how to integrate silence into daily life and how to give others privacy by one's demeanour. All this enabled us to live in a much smaller home that you might expect a family with 5 kids to fit into, without it being untidy or crammed with things. It also meant I knew how to make money go further (I learned this from my mother's superb thrift and self-discipline, too), which allowed me to be home-based in my work choices, which in turn allowed us to have an unlocked open home — a place to turn to for people in trouble or distress.

In the last decade or two, I've done a lot of thinking about my relationship with money. I've paid careful and close attention to the journeys of people like Daniel Suelo, Peace Pilgrim and Heidemarie Schwermer, who added to what I'd learned from monastics living in community some valuable lessons about living solo and freelance without money. Gandhi and Thoreau inspired me too.

As the spreading reign of Mammon is the thing killing our planet, our only home, and bringing great suffering to creation, I think our relationship with money deserves close attention.

I feel, though, that I personally am not ready to take the step of being entirely moneyless; but I try my best to lower the extent to which it features in my life. A long time ago, as soon as I could (once my children became independent) I adopted a discipline of earning below the tax threshold, to reduce involvement with my government's bloodthirsty pursuit of arms dealing, and other political choices abhorrent to me. Because I live in a house and contribute to our Council Tax, I am paying my share toward civic responsibilities (garbage disposal, police, etc), and because I pay (voluntary) National Insurance contributions I am paying towards our National Health Service; I'm not freeloading.

Another way I've addressed disentanglement from money is by sharing resources as much as I feel able — living in a shared house, for example.

I also try to see the physical items in my life as for my use, not for my ownership (a monastic principle). If I am part of the human family, and if I am merely the steward of what passes through my hands, then when I no longer need it I simply pass it on to the next person who needs it. My life is resourced by the grace and goodness of God, and I continue the flow of that grace in the world when I responsibly donate unwanted items to people who would love to have them. I sort of feel that everything really belongs to everyone, and what I have is just pausing by me for a while to make me happy.

Honestly? It's also true that selling things on eBay is a massive faff, and because I am chronically and inherently lazy I feel very unmotivated to do so.

However, every now and then there are some things I feel it only responsible to sell on eBay, with the objective of increasing access (in terms of numbers) to people who might like them.

What I am moving on today comes into this category.

As hardly any other women have such long feet, but the ones who do have to pay a lot for shoes, when I have shoes to pass on I sell them at low cost on eBay, to ensure they reach a person searching for them.

I used to wear Vivobarefoot shoes all the time, but in the last year I developed foot problems, and now the only shoes comfortable for me are the lightweight EVA Birkis. I have 5 pairs of these; I might at some point give one away, but as they're unisex I won't need to sell them — Freeglers will pounce on them happily.

As my foot problems developed, I struggled to find closed shoes I could wear in winter (I gave up, settling for thick socks with my Birki sandals, anything else hurt too much), and I bought a new pair of trainers I thought would be good, at great expense — 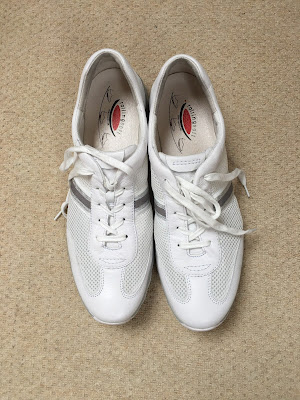 — and then also an as-new pair (much cheaper) on eBay. 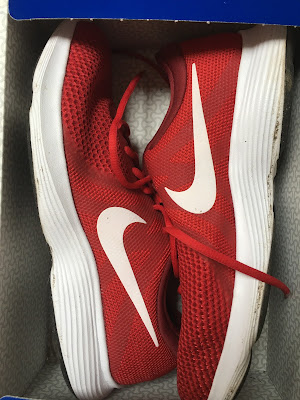 I wore them for a while. As the eBay ones were non-returnable, and as I'd worn the expensive new ones for several walks before I reluctantly accepted they wouldn't work for me, I was stuck with them.

So, in order to get them into the hands of another woman with very long feet (the lasts for women's shoes are not the same as those for men), I'll need to sell these on eBay; also the funeral boots I wrote about yesterday.