I don't know about you, but I find it very hard to determine at what point something should really be thrown away.

Today I am disposing of this bundle of three pairs of tights. 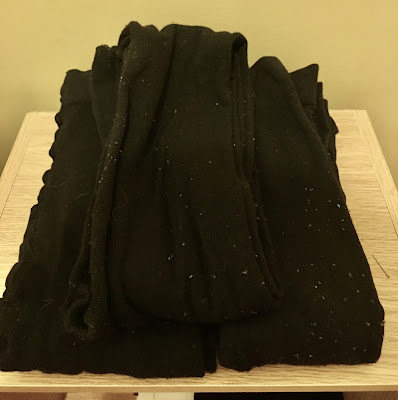 I do still have a skirt, so I have kept one pair of tights for those rare formal occasions when a skirt is called for. Mostly I have transitioned to trousers because they fold up and don't need ironing and don't need hangers — but mostly because they don't need tights which these days hurt my feet.

But I hesitated a long time about disposing of these pairs of tights I no longer wear. Tights that have been worn are not welcome in charity shops, and these ones wouldn't be even if they were in general. They didn't have holes but they are badly pilled and fairly ancient. They did look very well worn indeed.

When my clothes develop holes I usually darn or patch them, and I don't mind wearing shabby and mended old clothes at all — I rather like the wabi-sari character they develop. But it's not easy to know at what point exactly to call time on them and finally lay them to rest. I might have gone on owning these pairs of tights for several years more if my health changes hadn't begun to make them painful and prompted me to swap from skirts to trousers.

I find it all too easy to tuck away things I have stopped using and don't really want any more, into the odd corners of the shelves where I keep my clothes or the boxes where I keep my scarves and hats and gloves, and my spare set of bedding. I think, "I'll just put that here and decide about it later." And I do, but probably five years later, by which time I'd forgotten this thing I never use even existed, and I discover it again as a complete surprise.

Sorting though everything, with a view to finding two things a day to move on, has been a very good way of dislodging these limpets of belonging that cling with such close determination to the rock of my life.

Oh this made me laugh Pen. I'm having the same dilemmas over some clothes
(much loved, very worn, very soft, veerry comfortable) which have all given up on me at once. How many times should something be mended, even when there seems to be almost nothing left to stitch to?! Patch upon patch...and raised eyebrows from many;)
On a different note, did your booklets go on the fire? I wondered if they could go into a book instead.
Deb x

"Patch upon patch" — I like that. Are you familiar (I expect you are) with Japanese boro patchwork? There's an article about it here:
https://www.heddels.com/2015/08/all-about-boro-story-japanese-patchwork/

Yes, the booklets have been consigned to the flames. I do still have the electronic files if we ever want to do it again. But I think, you know, we are sometimes mistaken in trying to freeze something good into permanent form. It can be the moment — the doing and the living and the time — that makes it special. Different seasons ask for something different from us. x

Yes, I've been reading and thinking a lot about the type of impermanence you describe, and I have to say it sounds very comforting and actually very beautiful to let go and to remain open to what is. We get so bogged down, don't we?
It's funny how the books, blogs and even You Tube clips all seem to form a linked up community too. Thich Nhat Hanh talks about watering the seeds you want to grow, and I love his garden metaphor, because, of course, everything is cyclical and responds to the forces and elements of life.