Today my mind has no interesting principles in it.

I don't know how this last year has been for you, but for me it's been the most extraordinary time, not so much in externals as my life is quiet and somewhat restricted anyway, but in reappraisal of priorities in my life path. And, as for most people, there have been good days and less good days and yesterday was one of the not so good. By about ten in the morning I was hoping it would be bedtime soon.

Thank goodness the spring sunshine is glorious and our garden is full of joyous life. The fox comes to visit and sit with us, and the crow evidently has children in the nest because one or other parent comes on a food mission multiple times a day but they no longer visit both together. And all around the little birds — sparrows and blue-tits and robins and so on — chirp and sing and land on the branches of our trees. It is a place that breathes contentment, so that made me feel better, and isn't the day always full of minor chores to carry you through to the end of it, even if your mind and heart and soul and life feel strangely empty?

So there is no wisdom in my thoughts today, they are just muddling around bumping in to each other and apologising.

The things I'm moving on, then, are this very large and cheerful canvas bag. I like it but I have another shoulder bag and a rucksack, and I know for sure I don't want to get rid of those — and how many bags can one person need? 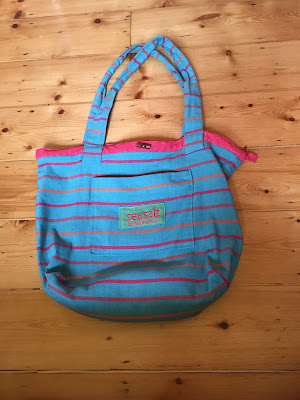 I put the frying pan and chicken roaster in it to take them to the charity shop.

Now, this next thing to give away made me extremely happy. It's a pair of trainers that I got secondhand on eBay and they were comfy but didn't offer the arch support I need. 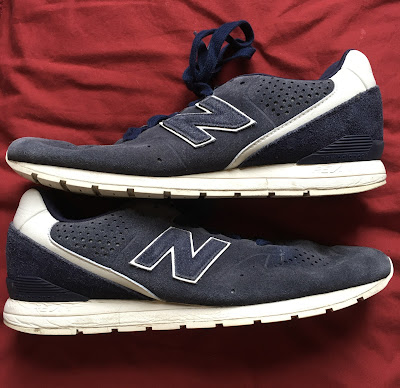 I intended to put them on Freegle not back on eBay, because they definitely looked worn although still in very good condition — but I eBay only things in tip-top as-new condition, not least because I find the whole eBay transaction thing a bit stressful, and not worth passing through the anxiety it generates just to earn a fiver. I will sell (even at a very low price) women's shoes on eBay, because other women with giant feet have a hard time getting the footwear they need, so it's not about the money but a matter of getting the right thing to the right person. However these were unisex so I thought Freegle would do fine.

But I did put three other pairs of shoes on eBay (ones I've already written about; red trainers, white trainers and the boots I got for my mother's funeral). People chugged along doing their eBay thing, saying nothing then all bidding together in the last 20 seconds of the auction, and they all sold. However, the red trainers went to a person who said they'd been watching those shoes all week and would I combine postage if they managed to snag the white ones too. They sounded to me like somebody with very little money, because all the shoes were on buy-it-now as well as the auction option, at a very low price. So I said yes, I'd combine — actually what I charge for postage doesn't even cover the basic cost of sending the thing, but never mind that, people are hard up, aren't they?

But then, at the last hurdle the person who wanted both must have electronically crashed into another bidder and come off worst, because they place a couple of bids but only managed to get the red ones — but, phew, at least they got those.

So then I knew they were disappointed and a bit sad and had big hard-to-fit feet and not enough money to get shoes, and I felt sad right along with them.

And I had the brainwave to send them the blue ones I'd meant to Freegle, just as a gift. I showed them the pics I'd made for Freegle, and they liked the look of the shoes, but they were worried about me being out of pocket and wanted to pay me something and pay for postage — that's how you know when people haven't got much; they care about how someone else is managing.

But I just wanted the happiness of giving a gift, which is in a different league altogether from the paltry satisfaction of earning a few quid and not quite enough to cover the postage, isn't it?

So I sent them off, and they arrived safely and the person reported back that they were comfy and being worn. An altogether satisfying result.