The things I'm moving on today have nothing to do with each other, except that I have kept both of them for a long time thinking "But surely I must want this" — for a different reason in each case.

The first is an anthology of poetry about animals, compiled by Leila Berg. 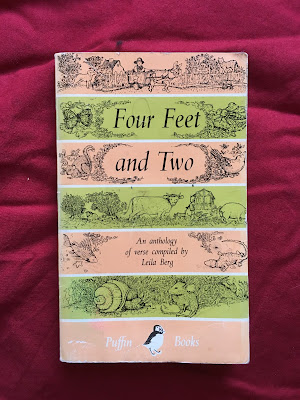 I have the most immense respect for Leila Berg's writing and perspective on life. She was one of the teachers at Summerhill, the school run in the 1960s by A.S.Neill, whose philosophy of education — along with John Holt's (who wrote How Children Learn, How Children Fail and Teach Your Own) — massively influenced the way I brought up my own children.

In my own childhood I had a book of her Little Pete stories, which are just excellent, and I think most highly of her writing.

So I pounced eagerly on this anthology when I saw it secondhand on Amazon.

What I hadn't taken into account is that poetry about animals usually makes me feel deeply sad; so much of it is inevitably about suffering, and human mistreatment of other species.

Like most people, I haven't found the last year easy, and I am tired and a bit low and not all that well. At the present time I seek out, with great determination, reading matter that will cheer me and strengthen me, something uplifting or at least entertaining — and this anthology turned out to be not that. I suppose I could put it by for another time, but I've already been doing so for several months; I think I can let this one go.

The second thing on its way today is a duvet — large, warm, still in the bag in which I bought it (again, many months ago). It was from an eBay shop that sells slight seconds of high quality bedding at knock-down prices. 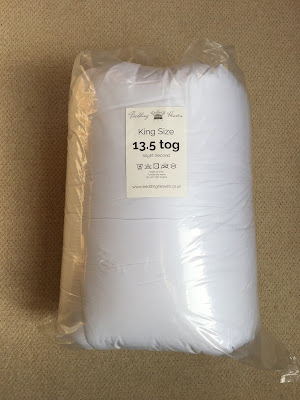 At the beginning of the pandemic, I became anxious over the possibility of family members falling ill. I worried in case my daughter Grace and her husband caught the virus and an emergency might arise where their children needed to stay with us. Thankfully their family has been super-vigilant and cautious in their health precautions, and continue to be so as infection rates drop and their turn for vaccination is on the horizon (one of them has had the first jab so far). But I'd bought some extra bedding, and indeed an extra futon bed, just in case.

Happily it has not been required, and we already have as much bedding as we need for our usual occasional family members passing through, so this duvet has been welcomed into another home, via Freegle.