I think the assumption that minimalism saves money can sometimes be a misconception.

It's like a similar false assumption that electric machines are inherently labour-saving. That idea comes (I imagine) from the emergence in the 1960s of vacuum cleaners and washing machines replacing brooms and hand-washing.

I wish we had never put any fitted carpet in our house at all. It was my decision to do so when we moved in, because the floors were all either chipboard laid down in the 1970s because the floorboards rotted, or Victorian boards with much scarring and heavy dark varnish. I mistakenly thought it would be more expensive to have the boards sanded and re-finished and the chipboard replaced with new boards, and we had to spend so much money on repairs and refurbishment that I went for carpet. But I was wrong about that; good carpet (plus underlay and fitting) costs just as much as having the wood floors made good. Later we took up the carpets and sanded the floors in the bedrooms, and we had a wood floor laid to replace the chipboard in the kitchen. But we still have carpet on the stairs and landing, and in the attic room, and the front sitting room. All this means we have a vacuum cleaner still.

If you have little furniture and hard floors and Japanese brooms, then sweeping through the house is easy and quick and blessedly silent.

I have washed my things by hand often in the course of my life and never found it a problem. The secret is to soak them. You start the night before, leaving the laundry to soak in a bath of hot soapy water, which loosens all the dirt. In the morning, you drain it out and run new hot soapy water, swoosh the things about in it, rub any stained places, then rinse through three waters (putting fabric conditioner in the final rinse if you want it. You carry it out in a bucket and hang it on the line to dry. It's easy and not very time-consuming at all — well, it takes time, but not your time, if you see what I mean.

Personally I find 'labour-saving devices' quite labour-intensive. It takes ages fiddling about changing a vacuum-cleaner bag, and the tools are hard to attach and detach, and vacuum cleaners are heavy to cart about and awkward to use on the stairs — plus, whatever the ads say, they don't get into the corners and edges like a Japanese broom. And, geez, how complicated it is to get a washing machine powder dispenser drawer out to deal with gathering mould, not to mention cleaning the filter and tackling the mould that grows on the door seal. A bath's a damn sight easier to clean.

Machines extend what you can do; they don't make it easier.

In the same way, it's unwise to confuse minimalism with frugality.

If you hoard loads of stuff the advantage (the only advantage that I can think of) is that if you need something you usually have it. So if you put on weight and need new clothes, and, instead of disposing of the ones now too tight, you keep them in your house, then it is true that in three years' time when you decide it is a problem and start to tackle it, if you lose the weight you put on, well, lo! — there are the clothes you had three years ago. You can wear them again now.

I think if you do this, you might be surprised to discover it's not quite as nice to have the old clothes back as you first assumed, but that's another conversation.

If you are a minimalist and want to travel light, then two crucial things apply:

I find the first of those two things relatively simple — I rarely want to revisit old clothes I wore years ago, and I can usually find a different way to do what I want if I've got rid of an implement or item of furniture. For instance, I find it positively easier to make coleslaw with the cheese grater than I did with the (bulk, heavy, multi-part) food processor we got for that purpose. And if I don't have much clothing, the rucksack I use for grocery shopping works perfectly well for a weekend away – if I had a suitcase and got rid of it, I don't need another if I take off for a holiday.
But the second one — making sure what you acquire really works — has cost me hundreds and hundreds of pounds. The fewer clothes you have, the more crucial it becomes that all of them are absolutely right. I buy as much as I can secondhand on eBay, partly for ecological and political reasons but partly to keep down the cost if I get it wrong. Because times beyond counting I have bought something (this especially applies to clothing) used it for a couple of months — and then reluctantly had to accept this isn't working.
For instance, I had a few pairs (perhaps four) of Vivobarefoot shoes that were perfect and I wore them all the time. And then when I developed a foot problem they no longer worked at all and I had to change to footwear with an arch support. So I got Birkenstock shoes, and the plastic beach sandals were fine because they're light (my joints are very soft). But I really wanted some closed shoes for the winter, so I got some fleece-lined Birki clogs. They are very expensive. I wore them for a while, trying to make them work, but after a month or two had to accept that they are too heavy for my feet and made the pain worse. So I parted company with them, and that pair of clogs is the first of my items moved on today. 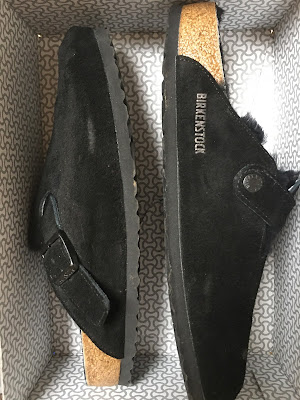 Another instance is that I love high-neck sweaters. I bought, to wear at my mother's funeral, a black cashmere sweater with a roll neck. I got it at a bargain price on eBay — new with tags, but end-of-line stock being moved on. It was soft, it was comfy, it fitted well, it looked good — but the roll neck in wool (even cashmere) slightly irritated the skin on my throat all the time, which meant I kept fiddling with it, which along with it being up by my face meant I had to wash it way more than I like to wash sweaters (carefully, by hand, and drip-dried, being cashmere). I want clothes that are easy to maintain. So that's the second thing that's gone out today. 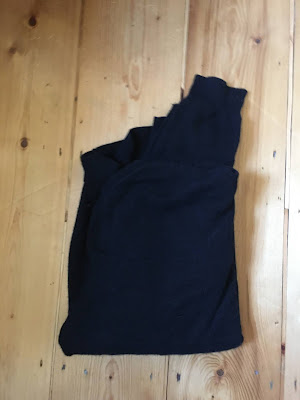 I now have quite a small collection of clothing, all of which is comfortable, looks presentable for homewear or even for a formal occasion, is hardwearing and easy to maintain, and all the things go with each other. The garments in my wardrobe were all either given to me or bought secondhand or in a half-price sale — so what I actually own didn't cost much at all. But the journey to arrive at that collection was eye-wateringly expensive.
So though minimalism may in the end save you money if you stick with it, it may not necessarily be the frugal option it looks at first.
Posted by Pen Wilcock at 05:44

Don't you think online shopping has made this worse? Before, the process of going from shop to shop and trying things on, slowed purchases down. And it's less easy now to be sure that a particular shop's clothes will or won't fit you.

I do see what you mean, and I think that's probably true for a great many people. I personally like to buy secondhand from private sellers on eBay, rather than from shops, to support the informal economy of people at home and make sure everything is used and re-used and not wasted, as much as possible. Not only that but I find I don't really know until I've had something and worn it for a few weeks or months whether it will work for me or not — even if I've had the chance to try it on in a shop! So in my particular case, the existence of eBay is a godsend, but Tony (my husband) way prefers the chance to try things on in a shop, and finds he makes better choices if he does that — and he is good at knowing if he really likes something; he usually keeps what he buys.