Let's have a break from thinking about clothing — although if clothes interest you particularly, well, don't you worry, I have plenty more in my heap of 730 things.

Packaging has become a serious issue in our modern world. I expect this reality has not passed you by and it is no surprise to hear me say so.

We do make an effort to keep down the amount of packaging that flows into our house, but there are other criteria to consider as well, so it's not always easy. If you make being zero-waste and plastic-free your number one goal, it's hard but can be done; but in our house we trip over other concerns and drop the zero waste objective.

For instance, it is important to us to buy organic, and to go through the world on foot. But the shop in easy reach on foot, which also sells organic food, and prices goods at an affordable level for us, sells food that is not organic too. This means they can sell the regular veggies loose, but the organic ones (which are more expensive) have to be wrapped up so they can be protected and labelled as organic. So the organic ones generate more packaging waste than the poison ones. Tough decision — sometimes resolved by just what there is and how much money we have.

But though packaging flows in, we do our best to slow down the outflow, by re-purposing and re-using. For instance, our seagulls and fox have their breakfast and tea in ex-mushroom-boxes or ex-tomato-boxes, and use them quite a while before they have to be chucked. By which time they are so utterly and shudderously filthy that they have to go in landfill — because I don't know if you have ever tried to clean a build-up of sardine grot off a plastic box, but it's an endeavour in which I've never been successful.

Then, I'd estimate you might say we are moderately conscientious in how we monitor packaging. We aren't great at it but we're not indifferent either.

So here, today, are two items to go that I have been husbanding carefully along the road of life for some time, but now I think it's their moment to leave us. 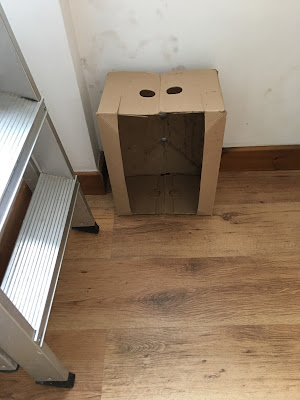 All last year we had a fortnightly delivery from a local veggie box scheme, which became a bit of a nightmare. They grew massive, tough things that were tasty but distinctly chewy, that filled up Tony's and my allotted fridge space in great lavish frondy stalky Triffidness that froze onto the back panel and overhung the edge. The gardeners had marvellous ideas of growing strange varieties we'd never heard of and didn't want — and their idea was that they'd choose what to put in the box and we'd just pay for it. So we struggled through most of the year, gave away the contents of the last two boxes, and were glad to not renew.

But they used to deliver in these cardboard boxes which they collected when they delivered the new one. Failure to do so carried a threat of being fined 50p. That meant for an entire year one large box after another stood in our small storage cupboard alongside the Abel & Cole boxes also waiting to be put out when their delivery man came by.

So when the music stopped, there we were left with this box. As I instigated the whole ghastly scenario, the box was my responsibility — and what I did was fill it with houseplants that someone from the Hastings Transition Town Facebook page wanted, and I gave it to her. So I smuggled it out with plants and ran like the wind.

Then the second thing to go was two Huel scoops.

I only ever had one bag of Huel, so I guess one of the scoops may originally have been mine, but some of us had several bags and I kept other people's scoops too, because they look so useful, don't they? However if — as I have — you stop eating oats and rice and flour and sugar and legumes, I can tell you they become a whole lot less useful. And these two just sat in the back of our kitchen drawer waiting for me to take some kind of action. So I did. I put them in the recycling bin.

The rubbish that is generated before things make it to the consumer is mind boggling too. I recently read a post by a young woman who reminded me of the level of ridiculousness we have achieved. She works in on of the newer stores where you buy the amount you want. However, there was a sting in the tail. For instance to sell a toothbrush minus packaging was obtained by the removal of many layers of plastic and packaging.

It seems there are catches everywhere.