When I was a child, my mother vacuum-cleaned throughout the house, dusted and cleaned the bathrooms every day. On Thursdays Mrs Lawrence came to help with extra cleaning — one of her tasks was going round the outside washing the paintwork of the windows.

We had a variety of brass and copper items — a vase, a tray, a kettle — and a fair amount of silver, mostly cutlery but also picture frames and other oddments. Every week my mother spread a newspaper on the (faithfully polished) dining table and there collected the various metal items, rags, Brasso and Silvo, and someone (me in the school holidays) cleaned them until they shone.

We had several pieces of wooden antique (or repro) furniture, all polished on a regular basis. It was fair to say our house was clean.

The front step was swept, the rugs and mats shaken, the bedding washed weekly and dried on the line in the garden. And ironed.

I do not do any of this. There is only one household task I do that my mother did not.

Back in those days — the 1960s and 70s — we had a frying pan, a grill pan and a chip pan (for deep frying, stood permanently half-full of oil which was used repeatedly and topped up when it ran low). These were used regularly and often, but not washed. I suppose it was to do with grease remains being good for cooking and good for the pan. I personally wash every cooking utensil I use, every time, good for the pan or not. That's the only thing I do that my mother left undone.

We do have furniture in our house, but not a lot. There are spaces, and we try to stand no furniture items in the passages and entrances. We keep down to a minimum the items standing on the surfaces. So if anyone (me, usually) feels moved to put the duster round, it's easy. Of the five of us permanently here — Tony, me, Hebe, Alice and Miguel the cat — four of us hate, loathe and detest the sound of any form of power machinery. Tony doesn't mind it, so he puts the vacuum cleaner round once a week. Sometimes one of us cleans some windows. Every now and then one of us cleans the ashes out of the woodstove and the fire grate. Most days we clean down the kitchen sink and wipe the work surfaces. When I feel motivated I get a bucket of soapy water and wash the floors through the entrance and the passageway and the kitchen and the studio. A couple of times a year I clean the top of the freezer and the top of the fridge, where dust and grime accumulate.

It's all easy and quiet (apart from Tony vacuuming on Monday mornings). We just use brooms and rags, no mops and buckets or special implements. We have a feather duster for when cobwebs appear on the corners of our high Victorian ceiling, but that duster is not over-used. I bought it in Lewes twenty years ago.

Because we are basically fairly lazy and don't like doing housework, we focus on maintaining ferocious vigilance against accumulation.

I remember the home of my first husband's aunt, well stocked with furniture, ranged all around the perimeter of the room like a ring main, with the sofa and easy chairs and nests of tables and magazine racks in the middle. When her mother-in-law died they inherited her furniture. Their house was already full but they brought it home anyway, and ranged it around the inner perimeter of the furniture already ringing the room. Terrifying.

The house of my parents-in-law of that marriage was similar. They never threw anything away. Under every bed, on every shelf, inside every cupboard, in the garage, a solid wodge of stuff packed every space. Every surface jostled with ornaments and knick-knacks and utensils. Tatted doilies copiously adorned the living room. Macraméed multi-level bowls dangled from the bathroom ceiling to hold spare soaps and whatnot.  When any of the old people died, this couple diligently and responsibly sorted the estate of the deceased, and brought home anything unwanted. They had a friend called Mrs Sennet, whose house they cleared on her death. Mrs Sennet had all kinds of stuff, that took up residence in their shed and garage and any remaining cupboard space in the house. What sticks in my mind from that scenario is that Mrs Sennet used to go on cruises with her husband while he was still alive — he pre-deceased her by some years — and from every cruise ship they brought home (and kept) a paper napkin from the dining room. They accumulated a stack of these mementos. Mrs Sennet ceased cruising after her husband's death, but kept the napkins, which my parents-in-law faithfully cleared from her house when she died, and brought home to their own house, in case they came in useful. They did not.

We live in an age of mass-production, when every event has to be marked by the addition of a physical item, and yes, things do accumulate.

But in our house we do our best to thin them out because we never signed up to be curators of a museum.

I think I mentioned before (but I expect you forgot; I usually do) that when the pandemic kicked off I became alarmed lest family members urgently and unexpectedly needed to be taken in to our house, so I acquired an extra bed. Well, no one extra had to stay with us in the event — our free-range inhabitant came home to roost for the lockdown, but she has a bed here on a permanent basis anyway because it's (nominally at least) her home.

Eventually as panic died down I saw that this bed was redundant. So my two items leaving the house today are a futon and accompanying wooden base. 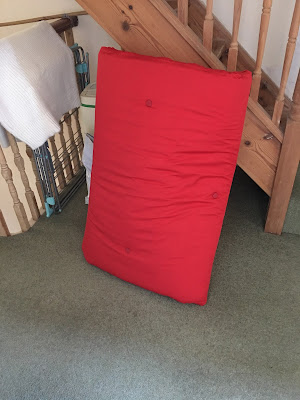 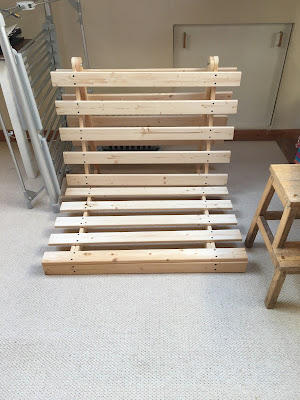 These went via Freegle to a woman with a homeless young man sleeping on her sofa. They didn't have a car to collect them, so Tony took them over to her in his car. They wanted some other bits too, including the three bears china that I wrote about before. So everyone was happy. It makes sense to keep the flow, move things on to whoever needs them.

Ember you describe some of the rooms here. Our house is small and the lounge room has seven tables of varying sizes, an antique washstand, a sideboard, two lounge chairs and two two seater sofas plus a chaise longue and a piano. The dining area is adjoined to this room and this super tiny space has a dining table and a table made from an old singer machine legs. One Christmas I cleared the top of the piano and was told it was too bare!!!!!! The complaints that things are not properly dusted are legion but it takes for ever. The piano is antique and has brass candle holders and lots of tiny, bitty brass bits to polish. I only hope that one day I can reduce the clutter.

Perhaps what you imagine and long for will begin to take shape — a place of order and peace. x