I have (I expect you do  as well) a mental collection of thinkers who have inspired me, whose wisdom travels with me and offers guidelines when I have a choice.

Here are three for today.

William of Ockham is one. To be honest, I haven't actually read William of Ockham's work, I only know about Ockham's Razor— but it's a useful concept and I love it. You'll sometimes see it written as "Occam's Razor", because spelling was a bit random in the 14th Century when William, a Franciscan friar, lived at Ockham.

Ockham's Razor is, in essence, a model for minimalist thinking.

Minimalism (and extreme minimalism and essentialism) and simplicity are often understood in terms of how many physical things we own, and how many social entanglements enmesh our lives, and how many obligations dominate our days — so; possessions, relationships, schedule (things, people, time).

Sometimes we leave out the dimension of our thought life, where minimalism applies just as much. For instance, Tony (my husband, part of our shared household) says, "I always assume people are more likely to be inept than malign." That's a form of minimalist thinking, because assuming someone is inept saddles you with less psychological baggage than assuming they're malign. Suspicion and resentment are heavy for the soul to carry. Cheerfulness is light, and compassion contributes to cheerfulness.

Ockham's Razor is the principle of going for the simplest solution/explanation unless there's a good reason to do otherwise.

Ockham's Razor is a good remedy for worry and for conspiracy theories and other unnecessary complexity cluttering up our thought life. It's a discipline that contributes to peace, and I regard it as an important component of minimalist thinking.

Like all who are drawn to minimalism I love the work of Henry Thoreau. His little house at Walden Pond has become something of a minimalist shrine, just as Walden is a minimalist classic. My absolutely favourite part, which I go back to again and again, is this.

Let your affairs be as two or three, and not a hundred or a thousand; instead of a million, count half a dozen, and keep your accounts on your thumbnail.

That last — "keep your accounts on your thumbnail" — has sustained and guided and inspired me all my life. Genius. A vivid, shrewd, liberating approach to financial management.

And my third thinker (for today, anyway) is George Fox, who applied minimalist principles to religious practice and social interaction, with the very beautiful result of the Society of Friends.

George Fox wrote reams, of course, and his work is a treasure-store of gems, but to pick out one — I love this:

Keep in the wisdom of God that spreads over all the earth, the wisdom of the creation, that is pure. Live in it; that is the word of God to you all, do not abuse it; and keep down and low; and take heed of false joys that will change.

So, he's advocating what is natural, humble and abiding; minimalism in a nutshell, I should say. A recipe for human flourishing.

Yesterday I left space in my soul for the Duke of Edinburgh's funeral, which was moving and beautiful, showing the world the power of simplicity — how what is pared back and kept to a dignified, disciplined minimum, allows the spirit to speak.

So today I have both this day's and yesterday's items to move on, and here they are. All pieces of china.

A few years ago I bought a cream jug on eBay. It's a good size, very useful and really pretty, so it has survived several household culls.

However, the crucial thing about cream jugs is that you put cream or milk in them. Nowadays, I can take a smidgin of dairy before my curmudgeonly gall bladder fights back, and I reserve that small window of opportunity for butter and hard cheese — without which, in my opinion an omelette is greatly impoverished. So, while the jug continues excellent, I no longer want the cream. And off it went to the newly re-opened (lockdown's easing) charity shop raising money to help homeless people. 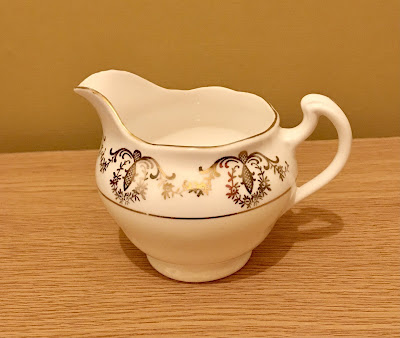 Leaving along with it, and received with much joy, were some other china items. Strictly there are six things here, not three, but I reckon two things that belong together as a set are in a sense one thing (like a pair of socks or a pair of earrings).

Though I sent these on their way in the end, they did in their short-to-medium-length sojourn in our house occasion a certain amount of hilarity in my soul.

What I thought I'd bought on eBay was the opportunity for us ladies in our household to share a sensible-sized cup of tea from the teapot we have from the same china house as these cups and saucers. The purchase was stupid in the first place because we already have plenty of china to drink from, but hey. 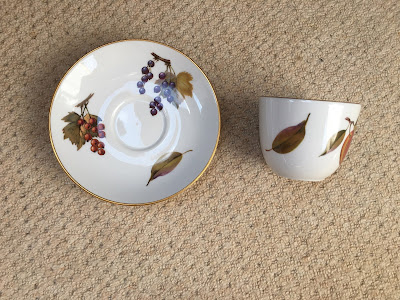 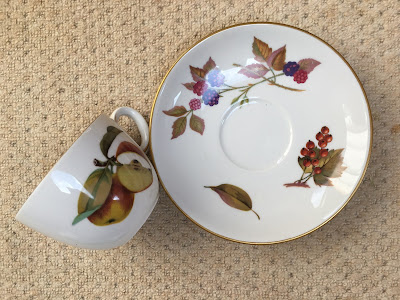 and a massive cappuccino cup. 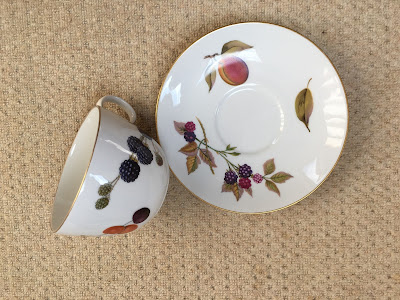 This amused me so much that I kept them. They're pretty, I thought they'd come in useful for something, and every time I looked at them I thought of Goldilocks.

But honestly? They are surplus to our requirements. I just got on a roll with buying china. Someone on Freegle was thrilled to have them. I expect she has bears at home.

The hilarious three cups made me laugh.

I love Occam's Razor, but I have a caveat about it that is forming in my mind, and which I will try to express. Life is inherently complex, but the complexity arises from the interaction of simple rules. As an illustration, think of a game of snooker - there is a pretty simple set of rules and basically only one thing that a player does; he must use a stick to hit a white ball into another ball. But these simple rules and interactions generate great complexity on the table as he moves the positions of the balls and must try to plan ahead based on what is happening. I think that people sometimes misapply Occam's Razor, not by going too simple exactly but by failing to recognise that there is complexity that has been generated by simplicity.

Reducing things to their simplest form, in terms of understanding, may require a degree of insight into what the simplest form is, as it may be disguised by the complexity that has arisen from it. For instance, in treating a health problem, is the simplest approach to apply one salve to the symptom, or to apply one change to the source of the symptom? Occam's Razor requires us, as well as editing our approach, to edit correctly.

Does that make sense?

Yes. So it is more like driving a car than a train — rules to follow but a huge level of individual interpretation and application, and many factors to consider (including what everyone else is doing — which continually changes the picture).
I remember Michael Lorence (husband of Diana from Innermost House) saying that simplicity eschews complication but is inherently complex.
And I think every person espousing simplicity pursues an individual path. I think your Grandad lived in great simplicity even though his house was crammed with stuff. The key is to find one's own sweet spot of authenticity.