When my mother-in-law died she had an impressive collection of shoes.

Like me she had long feet and in the early years of her life had the dickens of a job finding shoes to fit. Later in the 1980s as mass production took off in a big way, it became much easier to source what she wanted by mail order, and in those retail park malls where tall-and-small shoe shops found a niche.

This meant that, by the time what she wanted was available, she had a deep-rooted conviction this was a rare opportunity to be seized at all costs, and she purchased pretty much every pair of shoes she ever found that would fit her.

I have fallen into the same trap. Fear of missing out. Fear of letting a chance go by.

As my joints became softer and more troublesome and my feet became painful, I was on a mission to find shoes that would work for me —and as you know, for the most part I failed, until I hit upon the Birkenstock beach sandals. Partly fuelled by anxiety over rising costs resulting from Brexit (because Birkenstock is a European firm), I pounced with glee, and bought them in every colour they did in my size, which was stupid because of course I don't actually want to wear all these colours. Two, in particular, I find rather in-your-face and strident. And frankly, not being a centipede I don't need all that many pairs of shoes.

So here go two pairs. I think it's a bit pernickety to say each shoe is an item; I'm saying one pair is an item. So two pairs of shoes are my two items for today, going on Freegle. 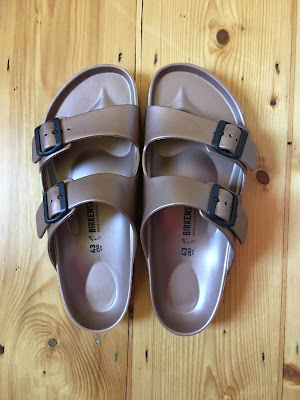 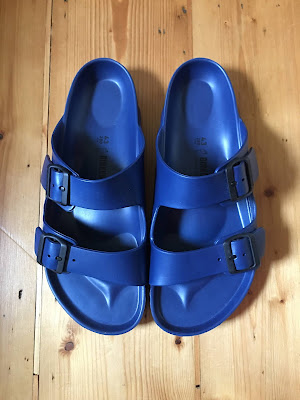 And I say to them, Goodbye and thank you and may you bring joy to your new feet.

I feel your pain. My feet are very wide and short. Very little fits well and if I buy the worn item I will suffer for a long time because my metatarsalgia will haunt me for months. I understand the wanting to have what you need. I hope someone is very blessed by these shoes.

Ha! We'd be good in a household together — you could wear all the shoes I couldn't wear!

Hi there Penelope! My friend suggested your book The Hawk and the Dove. What a great read! I'm on to the second one! It's super cool you keep this blog and have continued to do so this last decade. I'll definitely be returning!

All the best from Oregon,

Thank you, Evan. I'm so glad you're enjoying the St Alcuin's stories, and thank you for taking the trouble to let me know. Lovely to see you here.