I think what I'm about to describe may definitely not apply to everyone, but equally I am sure it is commonly true for a particular category of people — perhaps HSP, or on the autistic spectrum, or both? It is true for me.

There is a palpable lightness of being, an inner freedom, obtained by owning little.

I've written before about how my belongings constantly quietly talk. It's like the buzz of a roomful of people chatting and laughing. Up to a point that's okay. I can hear what they're saying, and I take in the points of view they're expressing, but there comes a point when their noise gets over-assertive and argumentative.

If my belongings are few and synthesised to all relate with each other, and if I know I could pack them all up into a suitcase and move out if I wanted to, then I feel peaceful and light. It affects the way I relate to people because I don't start out by feeling stressed and trapped. I feel light and not-quite-here inside, and that allows me to be less affected by the moods and perspectives of others, because I have obtained a freedom between myself and them. I am just, for the moment, here — but crucially, I don't have to be; and that makes it easier to stay.

I don't think everyone has this craving for ephemerality and disconnection. I think, from what I see and hear, that many people feel comforted and sustained by rootedness and connection — having their things around them and their relational network upholding them.

So I'm not at all recommending that you should minimise your belongings, just saying that I find it has a very beneficial effect on me — and that many other people have discovered it is the same for them.

I do think all people benefit from living in a space that is uncluttered — but not necessarily from minimalism. So I think simplicity is good for everyone; not being exhausted by too many things to do, too much stuff to sort and tidy and clean, too many relationships to attend to properly; but I think for most people it stops there. There's just this sub-group of humanity that needs as little as possible in order to be able to breathe.

I find my attention is claimed by

As I got older and the health issues began to clamour and needed fuller attention, I found I could address this successfully, but only by reducing the other attention claimants.

I wanted to carry on thinking, and the health issues are there as long as I have a body.

I stopped working because the combination of health issues and relationships made it hard to continue. This has in turn simplified my finances by significantly reducing my income, which has then simplified my life because I can no longer afford what I once used to do.

If you are also HSP or on the autistic spectrum and can relate to what I'm trying to express here, I'll be very interested to hear from you in the comments.

The two things I'm blessing on their way today are as follows. 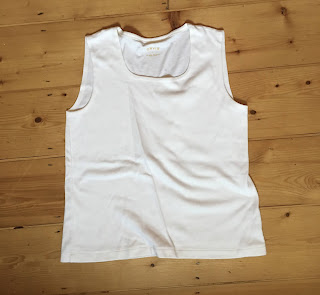 I like this (found it second-hand on eBay) but at the time I bought it I forgot that since I only like actually wearing long-sleeved garments I would never wear this.

Secondly I freegled a sun-hat. 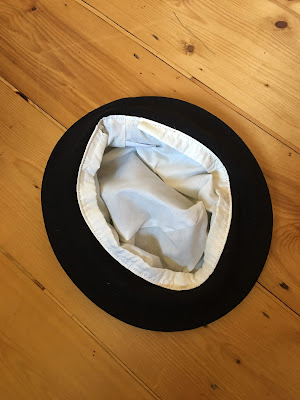 I forgot to photograph the actual sunhat I gave away, which was a soft olive green, and so I have photographed the one I still have, to give you the idea. I need only one sunhat; the sun does shine in England, but then again it often doesn't and is frequently too windy for hats. I only really wear it sitting in the garden or on the beach.

I spoke to my eldest child (aged 16, they/them) about this, as I think they have HSP tendencies. They said that their room is very loud (I should think it is, it's a tip!), and that's why they love being outside, but they also need to retreat.

They are a Marie Kondo fan, so perhaps getting one of her books out of the library again would inspire them to do some work on the stuff and feel more comfortable in their room.

Ah! Blessings on that child. To identify the difficulties and gradually find the way is slow, I think. Marie Kondo is a wonderful teacher. I especially love the way she is so respectful and present to the space that is someone's home, and treats every one of the belongings as a person with its own path and contribution. x

I'm on the autism spectrum and feel easily overwhelmed by things, so I got rid of quite a lot over the course of a few years, but it turned out I got rid of too much because I discovered that I feel exposed if I have too little. So lately I've been buying things again to fill some of the spaces I emptied. I think I like to feel a bit cramped, but only by very specific things that I love to avoid becoming overwhelmed.

Oh, how interesting! It's a very individual matter, isn't it? Your saying you like to feel a bit cramped reminds me of friends on the spectrum who like their bedding tightly tucked in, or who find benefit in those weighted blankets. I personally cannot bear any weight or restriction on me, and have the lightest bedding and clothing I can find, but I'm wondering if a weighted blanket might be something you'd enjoy. Or it could be, as your comment suggests, more a spatial issue.

I've actually thought about getting a weighted blanket. I always cover myself with a blanket whenever I'm sitting or laying down. Wool in winter and cotton during summer. However I think I'm more like you when it comes to clothing, because I don't like restrictive clothing at all. I don't like wearing socks or even turtle necks, and facemasks are a nightmare.

Oh, gosh, yes, face masks!! I can't *think* when I'm wearing them — I get all breathless and hot and bothered and make poor decisions, and give up trying to find the groceries I want on the shelves. The word on the street is that here in the UK the requirement for them will be lifted at some point in the summer, depending on how the vaccination programme is progressing I suppose.