Have you read Marie Kondo's books — about tidying? If you have, you'll know that she's Japanese and grew up within Shinto tradition. I didn't know much about Shinto until I came across Marie Kondo, but her approach to life intrigued me and I began to explore it more. I still don't know much about it, but I've formed the impression that the Shinto outlook on the world sees everything as being alive. So, for example, Marie Kondo might thank her shoes, when she takes them off as she enters her home, for protecting her feet and keeping them dry, serving her so well. When she folds her socks up to put them away, she does so gently because they deserve that — she doesn't screw them into a tight ball that would make them uncomfortable. When she goes to a new client, she first takes a moment to kneel on the floor in an attitude of devotion, really feeling the space and intention of that place.

This accords with my view of life, and reminds me of a friend who is a Reiki master talking to me (decades ago now) about placing her hand on her coffee table to reconnect its life back to when it was a growing tree.

"the reason every item must have a designated place is because the existence of an item without a home multiplies the chance that your space will become cluttered again. Let's say, for example, that you have a shelf with nothing on it. What happens if someone leaves leaves an object that has no designated spot on the shelf? That one item will become your downfall. Within no time that space, which had maintained a sense of order, will be covered with objects, as if someone had yelled, "Gather round, everybody!"

I find that so funny, and so true.

I've begun to notice that our house seems to have opinions and an agenda. Recently — in the last year or so — we tried very hard to have the bathroom re-done for various reasons, and tried also to further our ambitions to restore the floor in the front room from the chipboard put down in the 1990s to reclaimed floorboards proper to the Edwardian building that it is. We had the money, we found tradesman after tradesman — yet could not progress it. Every time the initiative fell through.

Not high up on our list, but something one of us wanted, was to restore the fireplace in her room (it had been closed up into a cupboard and the chimney capped with the other vandalisms of the 90s). The chimney stack also needs pointing. Somehow all by itself that work has taken off like a rocket. Extraordinary. It feels as though that's what the house wanted to do.

In the same way, as I've begun to think again about my belongings, what to keep and what is ready to leave me now, items have started to emerge I had completely forgotten existed, like wild boar stepping quietly forth from the trees at the forest's edge.

Here's one such thing. Ear defenders. Never in the passing decades have I felt the need for ear defenders, nor thought about them, but I was persuaded by kindly advice to purchase these for a concert I attended some long while ago, with the warning that it would be loud.

Then today, unbidden, they emerged from their hiding place saying, "Here I am. It's time for me to leave your life." 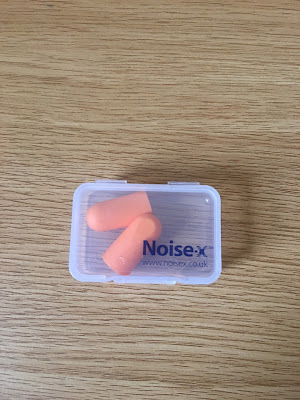 This jacket, on the other hand, has been the subject of much thought and inner struggle. My problem is that I think it beautiful. 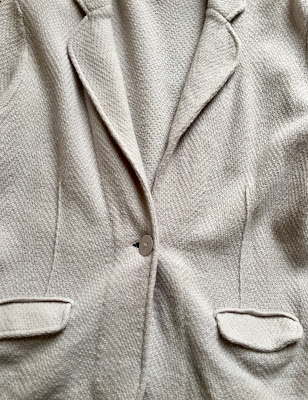 It is soft and make of wool, and is a most exquisite and subtle colour — is it oyster? is it grey? is it cream? is it beige? I really can't say. It is a colour of the beginning of the dawn, so lovely (the photo makes it look just cream, but it's something more than that). Unfortunately it's also a bit tighter than I like and it doesn't really suit me anyway. I have decided, despite its beauty, to face this reality.

So those were the two things that left my life today.

Ear Defenders. I love that phrase. Thank you for the joy that phrase alone has brought to my day.

I feel I could do with some time alone. My mother doesn't see that as an important need. I like to retreat into silence and rest. I don't need ear defenders for this. I simply lie down and put my hearing ear into a pillow. This drives mum bats because she will arrive and yell at me and I startle. This in turn gives her a fright and I am told off for scaring her! Today has been a family day and I loved it but I need to retreat for a while.

Okay, Suzan, I'm going to say it. You could do with setting firmer boundaries. Everything you have ever said to me suggests that you feel your relatives disrespect you, and the only person who can change that is you. I hope you don't find this remark rude. May you be peaceful, may you be blessed. xx