I spent a phase of my life working (in a voluntary capacity) as a free-church chaplain in a hospice spiritual care team. The hospice was situated in a long rambling building. Only one half was the actual hospice; a connecting door opened into a residential nursing home, for which I was also the free-church chaplain. I travelled alongside people making their Great Journey out of this world, and their loved ones and the doctors and nurses and carers looking after them. I also taught spiritual care workshops in the nursing home and hospice and more widely in the National Health Service.

The work was varied and interesting, including bereavement care and a lot of listening, creating funeral ceremonies — all sorts of things.

Today, for no reason I can identify, a memory came back to me from those days — more than 25 years ago now.  The building had at one time housed a monastic community, and the chapel remained as an architectural echo of its history, rather beautiful in a traditional, high-ceilinged, ornate way. One morning I sat in that chapel with an old lady who lived in the nursing home end of the establishment. I had taken her there in a wheelchair because she asked if I would celebrate Holy Communion for her, and she wanted to do that in the chapel not in the room where she lived.

So we sat together, and I began to go through the eucharistic liturgy with her, using the prayer books of the location we were in.

At an early point in the service there's a prayer of confession, followed by absolution from sin. The wording of this varies somewhat according to church tradition (Anglo-Catholic, Evangelical, mainstream Anglican, Methodist or whatever). In the more Catholic wing of the church, sins are confessed using the words "my fault, my own fault, my own most grievous fault" (from the original Latin, "mea culpa, mea culpa, mea maxima culpa").

I confess to almighty God,

and to you my brothers and sisters,

that I have sinned in my thoughts and in my words,

in what I have done and what I failed to do.

my own most grievous fault.

all the angels and saints,

and you my brothers and sisters,

to pray for me to the Lord our God.

This is not the form of words in the more mainstream parts of the Church of England, but it must have been the wording of the order we were following that day (the main C of E chaplain heading up the hospice team was a high-churchman), to explain what happened.

The lady I was with, though somewhat confused and not well, not able to follow the words on the page, had her memory triggered by the words she knew so well, and she joined in with bits she recognised, including this prayer of confession.

But somewhere it must have got transposed in her mind into a form of words from her childhood — something her mother used to say, I suspect, as I remember my own mother saying similar.

That's what my mother used to say — "It's his own stupid fault!" or "It was my own stupid fault!" — if she or someone else made a silly and regrettable mistake. She would also say, "I have no one to blame but myself!" Who was to blame when things went wrong featured sharply in my mother's thinking, as it does for many people (you'll notice this if you follow the news).

I think the memory of this fusion of words in confession came back to me today because I was thinking about the many mistakes I have made and wrong turnings I have taken, stumbling inadequately and often ineffectually along the path of simplicity. So I have ended up wasting resources (my own and the Earth's) on silly purchases, buying things I didn't really want for reasons I wasn't bright enough to discern — only to come to the reluctant conclusion I didn't want to keep this thing, within an embarrassingly short space of time. I should have known better; it was my fault, my own fault, my own stupid fault.

But that's part of what it means to be human, isn't it?

One of my fellow ordinands, alongside whom I trained on the Southwark Ordination Course (Anglican, but they also took Methodists), said one night as we sat in the pub enjoying a drink together when classes were finished: "Sometimes I get it wrong; and when I do, God forgives me."

It was such a simple thing to say, but profound as well, and went deep into my soul — I loved the trust and peace implicit in it.

Today, then, I'm moving on some things I should never have bought in the first place, a set of eco-snack-plates/trays made of bamboo, and some wheat-straw beakers that go nicely with them. I thought they'd be great for parties, and got them shortly before we all went into lockdown and no parties were allowed. The ensuing months offered plenty of time for reflection, allowing me to come slowly to the unwelcome realisation that the regular plates we already had would do just as well, and that these would get very little use. Such a pointless and unnecessary purchase — "my fault, my own fault, my own stupid fault. No one to blame but myself." But sometimes I get it wrong; and when I do, God forgives me. 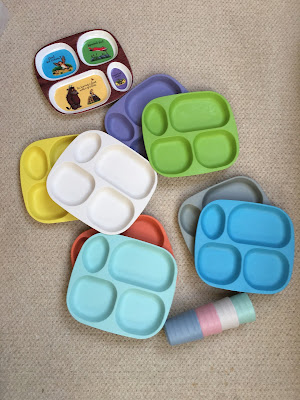 They quickly found another home through Freegle.

These stories touch my soul.

What a lovely thing to say! How wonderful to think that, right across the world from one side of the Earth to the other, we can touch soul-to-soul by sharing our story! xx

Absolutely. I understand what you say and why you say the things you say.

My mother loves to buy clothes and doesn't understand I don't like to shop much at all. I stick to cotton skirts that are homemade and cotton t-shirts. I might add a layer if it is cold but our cold isn't cold at all.

I find it hard to imagine living somewhere that's never really cold! In terms of clothes storage space, I think about two-thirds of mine is taken up by garments to keep me warm. Obviously they're bulkier than the warm-weather kit, but they also take much longer to dry, especially the natural-fibre garments. This is something of a conundrum for me. In recent times we've been alerted to the ecological scenario of doom generated by synthetic fibres going through the wash. Apparently over time all of us, from fish clear through to humans, will have more and more plastic integrated into our body tissues via the water courses. A depressing thought.
So I've made an effort to veer more in the direction of wool to keep me warm, and away from micro-fleece.
I wear roll-neck sweaters, and I hand-wash them so they don't shrink and felt. They take *forever* to dry, especially the necks. So I really need two or three — one to wear, one taking forever to dry, and one in the laundry basket waiting for it to stop raining long enough to make it worth doing some washing.

I was interested about your mother loving to shop, while you prefer to stick to the familiar things you already have and don't enjoy clothes shopping!

It strikes me that our mistakes must often be a source of blessing to others. In this case, there will be some family with little kids for whom plates like these make life immensely easier, which will in turn enable them to be kinder to each other. And chances are, in this town, they wouldn't have been able to afford them from new.

I agree with you. I've come to the view that if one stops using money as the benchmark of evaluation, there's a massive shift of priorities and a whole lot of things matter a great deal less.