The world has so many things in it, doesn't it? Simplifying our lives has become urgent.

I think the priority is to create the conditions for simplicity. For someone who has a big problem of hoarding that's creating health hazards, I'd go flat out for clearing the space somehow, anyhow, even if that means sending a lot of stuff to landfill — which normally we try to minimise.

But the objective must surely include reducing the amount of waste we generate; the ideal would be a zero-waste life. Making choices that reduce one-use plastic and moving away from clothing and packaging made of plastic (because it's so difficult and slow to bio-degrade) is an integral part of our human responsibility.

So whether we're moving in the direction of greater simplicity, pruning out our belongings to create a more flexible and peaceful environment that's spacious and easy to clean, or downsizing so we take up less space (to make room to share, or to move into a smaller and more affordable home), either way the question arises of what to do with everything we're choosing to part with. The choices should be made judiciously too, so that it doesn't end up like a yo-yo diet, tossing one load of stuff only to replace it with more and different. The idea is to end up with less, a stream-lined quantity that also feels like enough.

A little while ago I read an article challenging us to stop donating our unwanted belongings. I should clarify, by "donating", the writer meant taking large quantities of stuff to the charity shop (US, Goodwill). He said (I'm sorry, I've forgotten who wrote this) that the recipients get swamped and have to undergo their own clear-outs, resulting in most of what we donated going to land-fill. I can see that is likely true and very undesirable.

So it seems sensible (unless you are a hoarder in urgent need of radical and swift intervention), rather than having a massive chuck-out all in one go and sending cartloads of unsorted junk to the charity shops, we should sort out things to go steadily and gradually, finding new homes for our surplus items. That way they will be re-used and not add to the problem of pollution.

Freegle is good for this, and neighbourhood pages on Facebook. I imagine many Freeglers who are happy to receive bags and bundles of clothing are also eBayers, making money from selling on anything they don't want to wear themselves. I'm all in favour of that, personally. It helps the informal economy thrive, giving people a chance who would otherwise be in poverty. Selling on eBay is an excellent way to make ends meet, especially for those whose lives are home-based through choice or necessity.

So I think the responsible route to greater simplicity runs through ensuring that surplus items leave our lives in a trickle rather than a torrent, and that the trickle out exceeds the trickle in.

That said, every now and then we have some items to dispose of that are frankly garbage. Yesterday I sorted through my three sewing boxes, consolidating some things into a crafter's kit to give away on Freegle (I wrote about that yesterday), repurposing one (now emptied) box to store my stationery, using the cardboard box in which I'd kept my stationery as kindling for the fire, keeping my own reduced number of sewing things in the remaining box. At the end, I had a little pile of junk that is of no use to anyone. I sorted it further, to use what could be burned as kindling, and to send anything that could be recycled in the right direction.

So the things I got rid of today weren't donated to anybody. One thing was a little pile of rubbish. 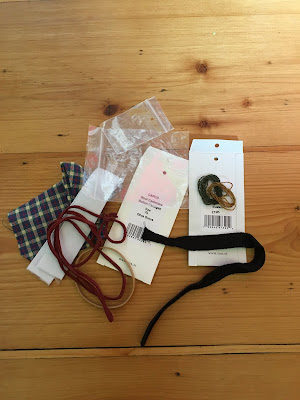 The other thing was the cardboard box I used to keep my stationery in, that I burned as kindling. It was a very good box, I've had it a long time. Before I used it to store my stationery, it was the place I kept all the receipts and record of expenditure during the years I held power of attorney for my mother. Hence the wording I wrote on it. 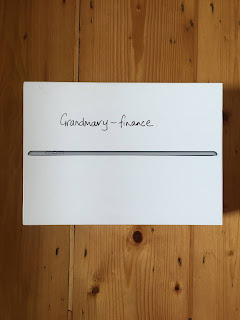 I know these don't seem like much to dispose of, but that's the point, isn't it? We hang on to all this stuff, until it gradually occupies too much of the space inside our homes — we can even end up needing bigger homes, to accommodate not ourselves but our possessions.