In general advice is as welcome as three-day-old cold cooked cabbage for lunch. Even so, today I am offering you a piece of advice for your downsizing and clearing of clutter. Very straightforward: don't dump it on someone else.

I believe it to be only responsible to carefully sort through my belongings and send them on to destinations where they will be welcome. I live in a town where there's much poverty, and Freegle is a wonderful channel for putting things within reach of people who can't afford to buy them. We have a lot of charity shops here, and donating good quality belongings to them both supports the volunteer sector (a lot of retired or disabled people greatly value the cheerfulness and companionship of their contribution to society working as volunteers) and raises funds for really good causes. But sometimes if I am passing on something like a lovely pair of earrings or a cashmere sweater, I will give my family first dibs on it, only donating it away if they have no need of it. Actually, I've even sent bundles of clothing overseas to ensure they arrive in the hands of someone who will really value them, because I don't like the wastefulness of just throwing things away. I no longer do that since Brexit, because postage costs have risen so much, and that's sad.

My previous husband Bernard was married to Anne, his soul mate and the love of his life, before me. Anne was an artist, and left behind a studio and a large collection of paintings when she died. Bernard sold and auctioned and donated as many as he could in honour of her memory, but was still left with a considerable number.

When he was diagnosed with a terminal illness that would rapidly progress, Bernard seized the time remaining, while he would still be strong and active, to both put his own affairs in order (simplifying his investments and savings down to one bank account) and resolve the echoes of Anne — her possessions still gathered here and there in his house, her studio and the outstanding paintings. Mindful of the pain and sadness it would cause his son (who inherited Bernard's house) to move in among the ghosts of his deceased mother as well as his father, Bernard cleared the studio, restoring it to the identity of a useful shed, donated away Anne's remaining personal possessions, and made a big ceremonial bonfire of the paintings. He didn't eradicate her memory; he left a photo of her on the dresser, and a few of her paintings on the walls, he just took away the saturation of her presence from the house. I thought that was both wise and kind.

My own mother loved her belongings, and brought them with her when she downsized from a house to an apartment. not knowing what to do with everything and having no room for it all in her new home, she stashed piles of boxes in the garage, that over time I sorted through, finding new destinations for everything. Even so, her closets and drawers and cupboards remained crammed full of clothes and china and paraphernalia. Frustrated, she muttered that other people just leave their children to sort all that out when they're dead, and she didn't see why she shouldn't do the same. She died in the middle of a pandemic, leaving my sister as her executor, so I don't know what's happened about her apartment and all that stuff, now.

It is really important to be respectful as well as responsible in disposing of one's accumulated hoard. I had a dear friend whom I used to love visiting — someone I am really fond of — who evidently decided the time had come to pass on the mounds of stuff she had stashed here and there. I discovered this on the occasion I went to see her, to discover she had ready for me two large bags of things she didn't want, for me to take away. I did take them; but I never could face going back, for fear of what else might be coming my way. And I understand that as we grow old it all gets too much — we just don't know what on earth to do with the rising tide of things; that's why it's important to begin before we are too tired.

So I suggest to you that if you value your personal relationships you will respect the unseen but real boundaries around your own life and your own belongings. Offer if you like, but don't presume or insist. As the old songs says, "You can't put your muck in my dustbin — my dustbin's full."

Don't fall into the common error of seeing your children as a conduit for your memorabilia and sentimentalia. Offer it, by all means, but don't just leave it to them.

Above all, if you know someone who believes in simplicity and has worked hard over years to pare down their belongings and maintain the considerable discipline of practicing minimalism, don't make the mistake of thinking, "Oh good, she can deal with my junk as well. Here you go."

I hope you don't mind me giving you this advice.

Today I am moving on two plastic fridge jugs. They came in a set of three and I thought they'd be really useful. They are, but I still don't want them; I've got too many things. Sometimes you have to get rid of useful things or things that you love, if you want the peace and freedom of simplicity more. 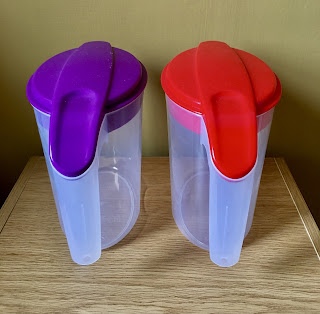 I kept the third jug, but I don't think I really want that either. If I'd made that decision at the time I took the photo I'd have included all three in one go, but as it is I added it to the donate pile a few days later, so that'll appear as a separate item in days to come.

Oh Pen, I didn't know that your Mother passed...please accept my condolences. I know she lived to a blessed age, but still...it's your MOM! Here's a big hug from across the pond!

I hear you...my kids both have emphatically stated that they don't want any of " my crap", both are minimalists and my daughter lives as close to zero waste as you can get. I'm 65, time to employ the gentle art of German death cleaning. So the library will benefit from my books, charity shops ( who in my neck of the woods charge exorbitant prices, I drive it it an hour away) will get everything else ( it sounds like a lot.but it isn't). The pandemic really brought home to many how little we really need.

Thank you for your kind wishes.
Yes, growing older concentrates the mind, doesn't it! I too am resolved to leave nothing behind. I try to keep everything in such a state that it would take hardly any time to clear it all away; simple and organised. A while ago I made the decision to stash nothing away in the attic.