What have we got today? Things that arrived in my life without consciously seeking them — this must surely happen to you, too, all the time! 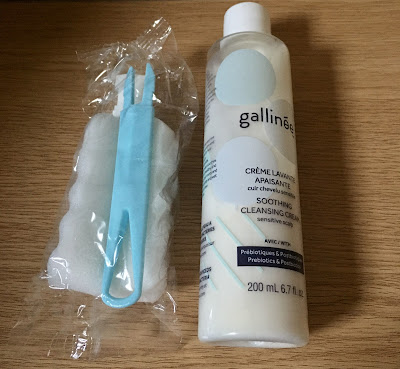 Back in the summer I bought two of those stainless steel bottles that keep water cold (or hot). I really love chilled/iced water, especially the water we drink which we fetch from a chalybeate spring just half a mile down the hill in the park. We put it through a Berkey filter just in case of pathogens, because the water table must surely be polluted in this modern world.

As it's somewhat laborious to go and fetch the water and carry a large, heavy bottle with several litres of it back up a steep hill, we certainly regard it as precious having got it home. That's why I bought two bottles rather than just the one. I have one full one, with its ice cubes, on my nightstand when I go to bed, and the second one has the remains of yesterday's water (if there is any left over) to be used up first. I think having water always accessible is a good way to ensure I'm hydrated. I've never been a big fan of drinking masses of water — I'm not one of those 3-litres-a-day people — just making sure what I mistake for hunger is not thirst, and that if I feel I'd like a drink there's some water right there, nice and cool.

So I bought these two bottles. And one of them had tucked away inside it (good job I looked!) a sponge-on-a-stick thingummy to clean the inside of the bootle as and when necessary. Well, for one thing I don't really feel the need to scrub out a water bottle, rinsing is adequate; but if I did want to clean it I'd use one of those fizzy soluble tablets for soaking dentures — they're good for thermos flasks and bottles. Also one of us has a set of tiny copper balls (like ball-bearings) that you can tip in a bottle and swirl them round in a little water, and they clean any accretions of algae etc of the side of a water bottle, but they're not abrasive because they're round. All this means the scrubby thing that came uninvited inside the bottle was completely redundant. However, yes, you guessed, it looked so useful that I kept it. Unfortunately. it's not (to me), so today it's going.

The second thing is half a bottle of probiotic hair-cleaning stuff (a shampoo alternative) that nourishes one's skin micro-biome. I like this very much and had a couple of bottles of my own over the course of time, but then I was using something else on my hair. One of us had this left over and didn't want it, so I gladly accepted it into my life, but I was on a different track by then and it's sat unused for simply ages on my shelf. Being oil-based it goes off a bit in time, and I think the day has come to call time on it.

So that was the saga for Day 8. I'm a bit worried now that I won't actually be able to generate 730 things to get rid of, because I haven't got much stuff in the first place, but I'll keep going on this journey and see where it takes me.

I had a sniff at the lovely Gallinée hair-wash stuff, and I was wrong; it hadn't gone off at all, so I took it back. I resolved to get on with using it up, and wondered if using it could be considered a form of getting rid of it, but decided not.

So here's a subsititute thing that arrived unsought into my life.

Our kitchen sink is set into a surround of oiled wood, so we have to use a free-standing draining board. For a long time we used a tray which was okay apart being not properly flat, not big enough, and creating puddles that meant the rim of glasses and mugs never dried if you left them there. So at the end of the winter I got us instead a silicone drying may which is bigger and had little projections on the surface holding the draining items out of the water dripping off them. Perfect.

It came with a scrubby thing to clean thoroughly round the little projections, but I think the brush we already have for scrubbing pans will do that okay, and these scrubby things are generally useful so I'm donating it. It might just get lost and overlooked in a charity shop, especially if people don't know what it is. As there are often people on Freegle looking for stuff because they're setting up home, I think I'll put a kit of kitchen things together and add it to that — so it may appear in with a box of other things later on, but it belongs in this day as a substitute for the Gallinée hair wash. 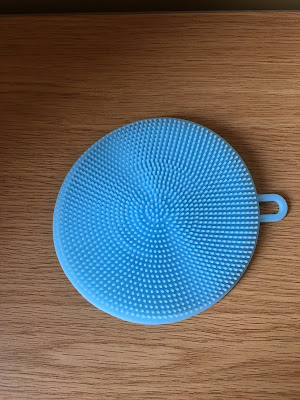