Our journey through life spirals, I think. We go round and round the same issues, over the same territory, but the perspective changes because nothing is ever quite the same.

Do you know Herman Hesse's book, Siddhartha? Such a wonderful story. In the course of it we come across a ferryman, who talks about how the river has become holy to him. He says,

"Have you also learned that secret from the river, that there is no such thing as time? That the river is everywhere at the same time, at the source and at the mouth, at the waterfall, at the ferry, at the current, in the ocean and in the mountains, everywhere; and that the present only exists for it, not the shadow of the past nor the shadow of the future."

From the first moment I read that it captivated me — and was, I think, something that formed and opened my mind, because I was only fourteen when I read it.

But I think you can also come at the same concept from the opposite side, and say that the river holds all the moments of time within its flow — because, though it is always the same river, sometimes it is the little mountain spring, sometimes a torrent rushing over rocks, sometimes the deep amber-green mystery of deep water passing slowly between meadow banks under great trees. Exactly because only the present exists for it, the river fully inhabits every time and place.

These thoughts returned to me today when I came back yet again to the familiar territory of thinking about how simplicity tends towards freedom. I have considered this so often, written about it, preached about it, revisited it over and over. But it's a spiral, not a circle; though it's the same river it offers a different manifestation of itself and a different view in this stretch of the journey.

How it resurfaced in my mind today was through the hatch of thinking about chocolate.

Last year I got ill again, and it became evident that my health problems were to do with insulin, which I (successfully) addressed by determined and sustained reduction in my starch and sugar intake. In a recent post someone commented that fats are also problematic; my own fat intake has to stay low or my gall bladder warns me loud and clear of a problem. It's a constant balancing and re-balancing thing for my, but I'm lucky to have a body that screams in pain when I get it wrong. We're all different; it's a very individual thing — do what works for you. And just a reminder, I won't be publishing any health comments because it's contentious — I don't want to get into a Health Guru War — and isn't the topic under discussion. I'm just explaining my train of thought about hanging onto possessions. I got better, and — a concomitant unintentional effect — also thinner. This second effect was more than a little annoying, because I'd spent some time figuring out a wardrobe of clothes that all worked with each other very nicely to fit an XL woman. Now I had to chase her metamorphosis down through L (where I assumed she'd stop) to M where she plateaued out to what I assume is a halt. I re-stocked her wardrobe and Freegled her former attire, knowing that she must never return to her old aristological habits. A new status quo took shape (literally).

One of the challenges of getting older and saggier, perhaps especially when hypermobility exerts its insistence on the necessity for soft, light, stretchy clothes — "Or else!!" — is that it's hard to look smart (in UK English "smart" means sartorially elegant, rather than clever). One way round this is to dress in black and white (plus ivory, beige and grey), which instantly adds formality to all the woolies and stretchies and cosies. It helps.

So there I was, garment duly adjusted to a neutral capsule wardrobe in size M.

Then, this last week, I got this overwhelming craving for granola. I thought hard about it, and decided that — in limited quantities and accompanied by the right other things — I could give it a go. While I was at the store I also bought a very small amount of chocolate.

Pleased with these purchases I enjoyed a pleasant lunch; after which I became consumed by terror that this might be only the top of a very slippery slope at the bottom of which would lie illness and the necessity to restock with size XL. I hope not.

But this is the point at which minimalism and maximalism part company. They have (obviously) two quite different approaches. Maximalism would suggest you should never throw anything away, exactly because you might need it again. Lest one chocolate becomes ten and my girth starts to expand, the maximalist would counsel me to keep every garment clear through L to XL to XXL and beyond — just in case. After all, you never know.

There's a moth that does this sort of thing — the Uraba lugens. As the caterpillar grows, it sheds its exoskeleton, but instead of just leaving it all behind it retains the head section in each case. These remain attached, adding one on each shedding, accumulating on top of its head to resemble a very odd hat. 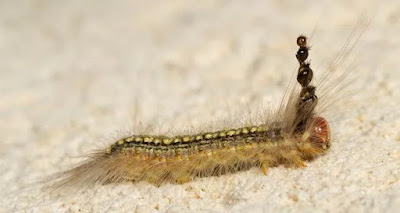 Minimalism would propose a different course of action. If, at any given time, one had only (say) three pairs of trousers, four t-shirts, three sweaters and a coat, then it wouldn't be difficult to swap out garments to accommodate a change in size or preference. In fact, with only a few items in the wardrobe it would be necessary to seek replacements sooner, because they'd wear out quicker — minimalism therefore making change simpler and less traumatic, and increasing one's freedom to respond to life's many and often unforeseen fluctuations.

So today I sought out two items that I had carefully squirrelled away like a caterpillar's hat in case they might one day be useful.

These are only small items — a little net bag in which a pair of earrings once arrived in my life, and two of the reflective ear protectors included in the packs of Hopi ear candles I buy — but they represent a large problem in terms of clutter; the unwillingness to let things go, let things flow, let life change, permit the freedom of simplicity. 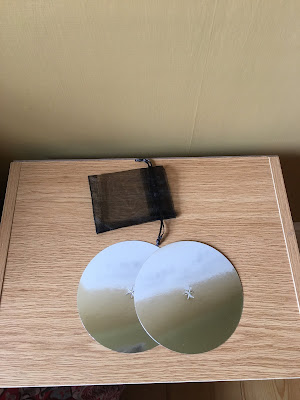 I just don't need them. For sure I will buy more Hopi candles, but they'll include another batch of ear protectors — and even if they don't, I'm sure I'll be able to think of something. And the little net bag can be repurposed to convey some other dinky little item to the charity shop. I'll see what I can find.