For story-telling purposes I acquired a small(ish) community of Dam trolls. Some of them arrived naked and some clothed. I wanted to dress them according to my own preference, in less garish and more natural garments, adding to the sense of them being real woodland people rather than cutesy toys.

So I set aside the clothes in which they'd originally been dressed, and sewed or knitted new ones for them. As a result, I had left over a little stash of troll clothes for which I had no purpose whatsoever. But it seemed such a pity to just throw these things away — I mean, surely they'd come in useful for something? Nope. Obviously not.

A year down the line I feel it is time to quietly drop them in the bin, along with a narrow linen offcut from something else I repurposed, that found its way into my sewing basket along with the toy clothes. 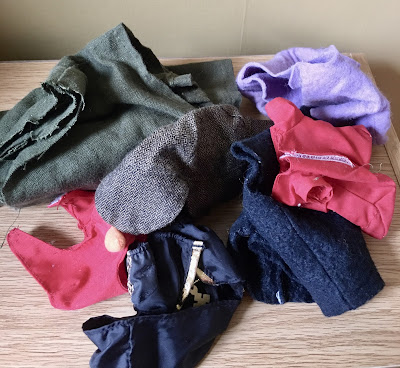 So, more than 2 items today, but that's okay.